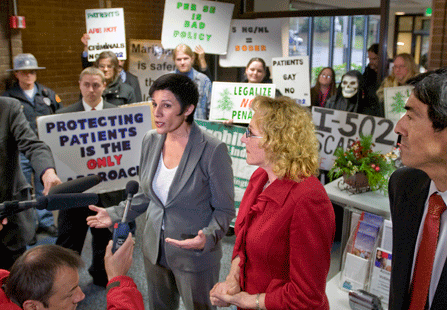 From his porch overlooking Seattle's Lake Union and Interstate 5, former U.S. attorney John McKay can see tractor trailers speeding down the highway. McKay has strong suspicions about the cargo some of them are carrying.

“I know that there are trucks going down that freeway filled with marijuana,” says McKay, who until 2007 was western Washington's chief federal law enforcement official responsible for prosecuting drug crimes, including marijuana trafficking over the U.S.-British Columbia border.

Now a law professor, McKay is a leading supporter of Washington's Initiative 502, which would decriminalize and regulate recreational marijuana use by adults. “I know the federal government does not have a plan to eliminate this income stream to the drug cartels,” he says. “The only thing I think will change [federal marijuana policy] is when states begin to revolt.”

In November, that revolt could begin in Washington, Oregon or Colorado, where voters will decide if they want to legalize and regulate recreational marijuana consumption and production. Any of these initiatives would put the states in conflict with federal law, which classifies marijuana as a controlled substance with no acceptable medical use.

All three states already allow medicinal marijuana use, which is also against federal law, but these initiatives would push even harder against federal restrictions by allowing recreational use of marijuana for adults 21 and over, allowing possession of up to an ounce of marijuana, and providing for the creation of a regulatory system which would authorize dealers and heavily tax marijuana sales.

Colorado's Amendment 64 to regulate and tax state marijuana sales could generate up to $60 million per year in state revenue over the next five years, according to an analysis by the Colorado Center for Law and Policy. But Washington's Office of Financial Management is less certain just what the windfall would be. It projects that the state's Initiative 502 could produce anywhere from zero dollars to $2 billion over the next five years, depending on the size of the market and potential federal challenges.

Recent polls suggest that the initiatives have a real chance of becoming law. Forty-nine percent of Colorado voters think marijuana should be legal, according to the newest polling data out this week from Public Policy Polling. The same pollsters found that 50 percent of Washington voters want to legalize and regulate marijuana and 43 percent of Oregon voters support legalization. And in the most recent national Gallup poll taken on marijuana, a record 50 percent of Americans said they support marijuana legalization.

Keith Stroup, who founded the National Organization for the Reform of Marijuana Laws, or NORML, in 1970, says that the ballot initiatives in the states are the only way change in federal marijuana policy can ever happen. “With full legalization,” Stroup says, “part of the strategy is to create that conflict [with federal policy]. If the federal government is not going to discuss marijuana policy, by creating this conflict, we will force that discussion.”

By creating that conflict, however, the three states are risking a potentially costly and complicated legal battle with federal authorities, not unlike the conflict created by state anti-immigration laws or restrictive abortion policies. Seventeen states and the District of Columbia have already tested the legalization waters by allowing patients to consume small amounts of marijuana for medicinal use, with the amount of regulation varying widely among the states. Although the federal government has not enjoined any of the statutes, enforcement agents regularly close down dispensaries that operate within 1,000 feet of schools or are believed to be selling marijuana to minors or unlicensed adults.

The Obama administration “steadfastly opposes legalization of marijuana and other drugs because legalization would increase the availability and use of illicit drugs, and pose significant health and safety risks to all Americans, particularly young people,” according to the Office of National Drug Control Policy. The Department of Justice did not respond to repeated requests for comment.

Along with opposition from the federal government, the initiatives face opposition from state political leaders. No sitting governor or gubernatorial candidate supports any of the initiatives. In Colorado, the powerful Denver business community opposes legalization because of concerns that it would call into question an employer's right to fire an employee who has tested positive for the drug. Colorado's Attorney General John Suthers, who also opposes legalization, says that he is not as concerned about the effects on public safety as he is on public health.

“Since we've had [medical marijuana] dispensary distribution, the number of kids in marijuana addiction treatment has grown,” Suthers says, “and we're seeing significant increases in the number of youth expelled for marijuana use and dealing.”

Suthers points to recent studies suggesing that marijuana use by people younger than 18 correlates with abuse of prescription drugs later in life. Persistent marijuana use over 20 years by a person who started smoking before age 18 resulted in an overall IQ decline of up to six points, according to a recent study from researchers at Duke University. Even if users stopped smoking marijuana, the damage was irreversible, the study found. The loss of IQ points was not seen in consistent cannabis users who began using after age 18.

But supporters of legalization say that bringing marijuana sales into the open will limit young people's access to it, because sellers will be required to check age and identification for all purchasers, just like they do for alcohol. And as they do for alcohol, states are looking to regulate driving while under the influence of marijuana's active ingredient, delta-9-tetrahydrocannabinol, or THC.

Washington's Initiative 502 sets a specific intoxication standard of five nanograms of THC per milliliter of blood, which is somewhat comparable to a 0.08 blood alcohol content. Alison Holcomb, director of the state's legalization campaign, says the limit was included in the initiative in response to police and public safety concerns over impaired drivers. One of the major reasons California's 2009 legalization effort failed, says Holcomb, was that it didn't address impaired driving.

The nanograms-per-milliliter limit is controversial among researchers and some legalization advocates, who worry that science doesn't support a blanket intoxication standard. The effects of marijuana only last about four hours, but traces of THC can be detected in a user's blood for up to a month after the last use of the drug. Currently, 17 states have a zero tolerance policy for any amount of marijuana in a driver's bloodstream, and Nevada has a two-nanograms-per-milliliter limit.

Tensions over the nanograms-per-milliliter standard in Initiative 502 flared at Seattle's pro-marijuana rally, Hempfest, earlier this summer. At the event, some Washington marijuana activists said they will not support Initiative 502 because they disagree with the standard. The Colorado and Oregon initiatives do not set an intoxication standard, leaving it to police to determine sobriety through field testing.

But concerns over public safety seem to be taking a back seat in each campaign to concerns over the cost of continuing to criminalize marijuana use. A study from Washington's branch of the American Civil Lberties Union found that the state spent $211 million on marijuana enforcement between 2000 and 2010.

If legalization is approved in any of the states, it will take at least a year for state agencies and the legislature to set a tax rate and create a regulatory structure allowing marijuana to be bought, sold or consumed legally.

Seattle's McKay hopes federal policymakers will step back and let states try their hand at marijuana regulation. “States have always been laboratories of democracy,” McKay says. “My hope is that calm heads will prevail and allow [the states] to take this policy for a test drive.”