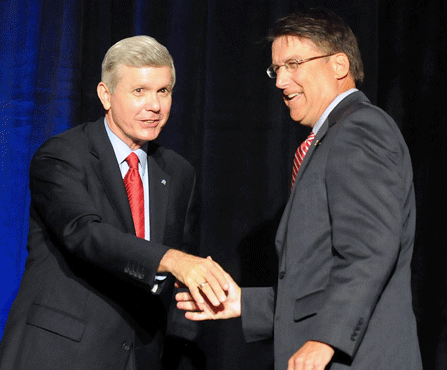 As Democrats gather in Charlotte this week, the home state delegation has plenty to worry about. North Carolina Democrats, who have held the governorship since Bill Clinton was first inaugurated as president, could lose the post in November. That could put all of North Carolina state government in Republican hands.

Walter Dalton, the Democratic nominee for governor, faces a stiff challenge. He is the lieutenant governor to an unpopular incumbent, Bev Perdue, who opted not to run again. Dalton trails in fundraising, having begun the summer with just one-sixth as much money as his Republican opponent. And Pat McCrory, the Republican Dalton faces, starts with higher name recognition, because he came close to winning the governorship four years ago.

Polls show Dalton trailing McCrory, a former mayor of Charlotte, though the race is closer than many expected. Most summer surveys have shown McCrory with a single-digit lead.

But the presidential contest is thought to be especially close in North Carolina, and that may be Dalton's best hope.

The Obama campaign already has spent more than $15 million on ads in North Carolina, but Romney and various Republican groups have spent nearly $27 million. Both gubernatorial campaigns have been almost invisible by comparison. McCrory has run two ads so far; Dalton has not run any.

Obama's camp also has an extensive turnout operation, with dozens of offices throughout the state. The North Carolina Democratic Party, on the other hand, has been hobbled by a sexual harassment scandal that nearly toppled chairman David Parker.

John Robinson, the communications director for the Elon University Poll, says the Obama factor will not be enough to help Dalton. He says McCrory has a commanding lead already, and North Carolina voters are not otherwise paying attention to the election for governor.

Dalton is campaigning on improving schools, while McCrory is focusing primarily on improving the state's business climate. But the biggest question is how each of them would work with assertive Republican majorities in the legislature, which likely will remain in power after the election.

"In the statehouse," says Robinson, "the Republicans were a much more dominant force than the governor was or the governor has been. With Republicans controlling the General Assembly, Governor Perdue was in a very defensive posture."

But both Perdue and the Republican-led legislature are extremely unpopular. An automated June poll by Public Policy Polling, a firm that works for Democrats, found 30 percent of voters approved of Perdue, compared to 23 percent for the legislature.

McCrory is seen as a moderate, but Dalton may try to associate him with the more conservative wing of his party. “One of the disadvantages that McCrory may have is an association with a controversial, unpopular legislature that may offset Dalton's association with an unpopular governor,” Guillory adds.

Budget cuts and clashes with Republicans have defined Perdue's single term as governor. Those fights damaged Perdue's popularity and ultimately convinced her not to seek a second term. “It is clear to me that my race for re-election will only further politicize the fight to adequately fund our schools," she said in January."A re-election campaign in this already-divisive environment will make it more difficult to find any bipartisan solutions."

In many ways, Perdue faced a situation similar to Obama's when she got into office in 2009. But the president passed a stimulus package and bailed out the auto industry. "Governors don't have that," Guillory says. "She was immediately into budget cutting.” With money so short, Perdue did not have resources for a signature project or investment, which deprived her of a natural base of support.

Republicans took control of both chambers of the General Assembly for the first time in more than a century in the 2010 elections that swept the GOP into power across the country, especially in the South. Since then, they have repeatedly butted heads with Perdue, whose popularity also suffered because of a minor campaign finance scandal.

The Republican legislature scored several victories despite Perdue's opposition. It put a constitutional amendment on the ballot to outlaw same-sex marriage. Perdue campaigned against the measure, arguing the law would affect more than just same-sex couples. Voters approved it in May.

On many issues, Republicans found enough Democrats willing to join them to override Perdue vetoes. The governor vetoed both budgets passed since Republicans took control of the legislature, and lawmakers overrode the vetoes both times. Lawmakers also overrode Perdue on a measure allowing hydraulic fracturing to mine for natural gas and one imposing a 24-hour waiting period and other restrictions on abortion. Despite Perdue's opposition, the legislature severely scaled back a measure to let defendants present statistical evidence of racial bias in death penalty cases.

Perhaps most important, Republicans were able to draw new legislative districts that could help preserve their majorities in the House and Senate. Governors play no role in redistricting in North Carolina.

But Perdue has stopped other Republican initiatives, including a bill creating tough new voter identification requirements and a measure to permit offshore oil drilling.

The disputes could give Democrats a long-shot chance to win at least one legislative chamber, even if they lose the governor's race, says Robinson, the former editor of the News & Record in Greensboro. "It's probable that Republicans will maintain control," he says, "but if they lost either the House or the Senate, I wouldn't be shocked."