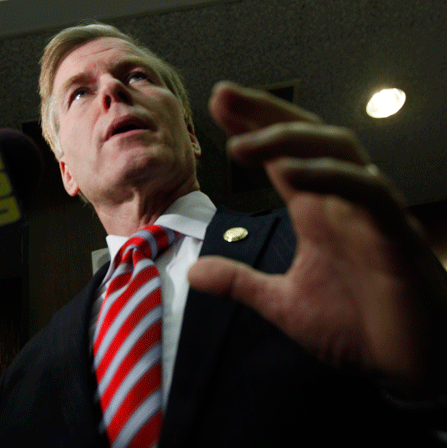 This past June, twelve days after the surprise dismissal of its president plunged the University of Virginia into turmoil, Governor Bob McDonnell sent a strongly worded letter to the institution's Board of Visitors.

The governor criticized the board for not being more transparent about its reasons for dismissing President Teresa Sullivan. With the board set to meet a few days later, and many calling for Sullivan's reinstatement, McDonnell demanded that board members either definitively determine Sullivan's fate or resign. But he stopped short of telling them what they should do.

“[T]he role of any Governor is not to micro-manage personnel decisions of the Board,” he wrote, underlining the word for emphasis, “for doing so undermines the entire university governance structure, and weakens the chain of command and authority of the Board and President.”

The controversy at UVA, resolved days later with Sullivan's reinstatement, is the latest in a series of higher education crises in which a governor has played a crucial role. These episodes raise questions about how much influence governors have on the colleges and universities within their borders, and whether it is too much or too little.

Florida Governor Rick Scott made headlines in December when he urged trustees at Florida A & M University to suspend the university's president, James Ammons, in the wake of a hazing death. And Pennsylvania Governor Tom Corbett was on hand—albeit via speakerphone—last November when Penn State University's Board of Trustees decided to dismiss President Graham Spanier, football coach Joe Paterno and other administrators in the wake of the Jerry Sandusky sex abuse investigation. Corbett initiated the Sandusky investigation as attorney general before he was elected governor.

When to Step In

As the former attorney general, Corbett was particularly well-versed in the details of the Sandusky case. But he also is a member of Penn State's governing board, one of only 14 governors who sit on at least one of the governing boards of the schools in their state. Governors typically exercise influence on the governance of public universities by appointing trustees, rather than serving as one.

The tradition of governors serving as trustees themselves goes back more than a century in some cases, according to Rich Novak, senior vice president for programs and research at the Association of Governing Boards of Universities and Colleges, and he thinks it's outlived its usefulness.

“A governor can have a voice with the board at any time,” he says. “It's archaic.” He says governors already have enough influence through board appointments and the legislative agenda and budget that they promote.

Governors who do serve on the boards seem to agree, since they rarely attend board meetings. Before participating in the November meeting where Penn State trustees decided on the fate of Spanier and Paterno, Corbett had skipped the first five meetings since he had become governor. Many governors designate a proxy to go in their place.

“It's difficult to go to all of them,” says Bob Riley, the former governor of Alabama. He sat on the governing boards of all the universities in his state, but says he avoided asserting his authority unless there was a serious problem. For example, Auburn University and the Universities of West and North Alabama all faced losing accreditation during his term. “Only the governor can fix it at that point,” he says.

Personnel matters are another story. While Riley was happy to offer an opinion on the hiring of university presidents and other leaders when asked, he says he never tried to lobby boards in favor of one candidate or another.

“If you ever take that authority away from the board of trustees,” he says, “then you basically take away their ability to have any control over the operation.”

While Riley endorses a hands-off role in university governance, plenty of other governors have disagreed.

Ronald Reagan famously ascended to the governorship of California in 1966 promising to “clean up the mess at Berkeley,” according to Lou Cannon's 1982 biography, Reagan. As governor, Reagan criticized university leaders for failing to crack down on student anti-war activists, and he sparred repeatedly with them during his first term. Just 18 days after he took office, he voted with the majority of the Regents of the University of California to dismiss UC President Clark Kerr.

More recently, Texas Governor Rick Perry has demonstrated that he has strong ideas about who should lead his state's universities and how they should operate. Nowhere has that been more apparent than at his alma mater, Texas A & M University.

Former Texas A & M President Ray Bowen says of four governors he's worked with in Texas and Oklahoma, Perry was the most active in promoting candidates and ideas he supported.

That approach first became apparent after Bowen announced his departure, he says. Perry backed former U.S. Senator Phil Gramm to be Bowen's successor, while trustees supported future U.S. Secretary of Defense Bob Gates, then a dean at the school. While the trustees had their way on that hire, Perry would successfully influence future hires, including the 2006 appointment of Michael McKinney, his former chief of staff, as chancellor of the Texas A & M system.

When Perry ran for re-election in 2010, his Republican primary opponent, U.S. Senator Kay Bailey Hutchison, charged him with cronyism in higher education. And in the general election, Democrat Bill White accused Perry of micro-management. Months before the election, a report by Texans for Public Justice, a non-profit group that tracks the influence of money in politics, pointed out that the majority of Perry's trustee appointees were major donors to his campaign.

Perry survived both contests and his spokeswoman, Lucy Nashed, says he hasn't changed his approach since re-election.

“Governor Perry is very involved in his vision for Texas,” she says. “He lays out priorities and wants to see them come to fruition.”

In appointing trustees, Nashed says that Perry looks for candidates who share his vision and whom he trusts, but she says he leaves it up to them to govern universities as they see best.

But active involvement by a governor can create unanticipated consequences. In 2007, for example, Perry asked the regents of Texas Southern University to resign following years of fiscal mismanagement. But the Southern Association of Colleges and Schools warned that Perry's initial plan to appoint a single regent reporting directly to him would jeopardize the university's accreditation. SACS also cautioned Florida's Rick Scott after he publicly called for the suspension of the Florida A & M president.

“I did write the governor and tell him back off,” says the president of the association's Commission on Colleges, Belle Wheelan. “While he was certainly entitled to his opinion, he had put a board in place.”

Wheelan says she far preferred the approach Virginia's McDonnell took earlier this year. While trustees and former university leaders bristled at the suggestion during his predecessor Tim Kaine's term that they were “foot soldiers of the governor,” Wheelan says that McDonnell's letter suggests he sees Virginia's current Board of Visitors as anything but.

“He didn't tell them what to do,” she says, “he just said get busy; which is ideally what a governor would do.”