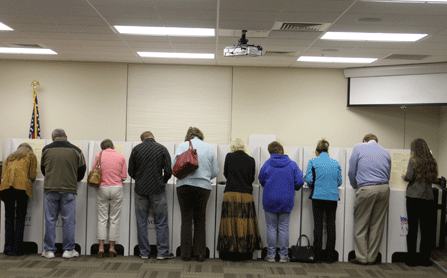 Those are among the many steps states have taken to prepare for November's elections under a host of new or stricter voter identification laws enacted around the country since 2010, even as challenges to those same laws continue to wind through the courts. The suits mostly claim that Voter ID discriminates against the poor and minorities who are less likely to carry the needed identification. In some states, lawsuits are casting doubt on what the rules will even be on Election Day.

For the past two years, public attention has focused mostly on the question of whether Voter ID is a legitimate weapon against voter fraud or a Republican stratagem aimed at suppressing minority turnout and helping GOP candidates win more contests. For those in charge of administering the election, however, the central issue is not the intent of the laws. It is how to make the system run smoothly.

More than 30 states now have some form of law requiring voters to show identification at the polling place. But with Nov. 6 barely two months away, those with new laws face a daunting task: Implementing massive, controversial election law changes ahead of a hotly contested, high-turnout presidential election.

As R. Doug Lewis, head of the National Association of Election Officials, puts it, any significant procedural changes are a challenge before a presidential election. The complexity and controversial nature of Voter ID, he says, is only complicating matters this year.

Most states say they're well prepared, and indeed some have had nearly two years to get ready. But many still voice concerns about how the new laws and lingering uncertainty will play come Election Day. Inconsistency in staff training or Voter ID law enforcement around the country is just one worry. The preparation of the needed ID documents is another.

Meanwhile, the clock is ticking.

“Certainly when you get this close to an election, chances are there are going to be mistakes that are made,” says Michael McDonald, an elections expert at George Mason University. “Probably a presidential election is not the best time to roll out a new election law.”

One of the more daunting and high-profile tasks for states with Voter ID laws involves making changes far in advance of Election Day. They have to arrange to get IDs to those who need them and foot the bill for those who can't afford them.

For some, that's meant outreach, offering free IDs and imposing extra hours on motor vehicle offices. Tennessee created separate processing lanes for those needing just an ID to vote, a response to increases in demand and wait times. Others have seen little change. Wisconsin, for example, issued barely more than 8,000 additional IDs in the year after its law was passed, compared to the previous year.

In fact, few states with new Voter ID laws report huge influxes in demand for IDs so far, even amid the outreach and media attention. That has some worried about a spike in demand as Election Day nears. But officials say they have contingency plans ready if that happens.

With that in mind, too, some states have looked to ease the ID-issuing process. After facing a lawsuit centered on difficulties some faced in gaining IDs, Pennsylvania created a new ID card designed just for voting. Residents can apply without a birth certificate or Social Security card, a change that significantly streamlines the process. To receive the ID, residents must provide their name, address, social security number and some proof of residence (which can include someone else vouching for the applicant).

Still, outreach and publicity remain concerns, and some see lagging demand as a sign that eligible voters aren't getting the message. That has led states to consider renewed outreach efforts this fall, on top of campaigns that started soon after the laws were enacted. Many legislatures also have provided additional funding for outreach. Wisconsin has spent nearly $2 million, part of which included hiring a “Voter Photo ID Elections Specialist.”

But most states say they're satisfied with their outreach efforts, and that their voters are prepared. Mark Goins, Tennessee's coordinator of elections, says his state's publicity tour was a significant undertaking, and largely a success. He personally did 30 town halls, and his office designated staffers to reach out to certain groups: young voters, for example, and the disabled. Of states that do anything less, Goins says “I think they're failing their voters.”

“But it did increase our workload,” he admits, “substantially.”

Training at the Polls

Another substantial task facing elections officials in states with new Voter ID laws this year is making sure the thousands of poll workers who actually administer the election are prepared. For many, that's meant revamped training materials and procedures along with pre-election tests for workers to ensure they know the law and how to implement it.

But even the most well-intentioned efforts can fall victim to a fatal flaw in election administration, says Karin Mac Donald, director of the Election Administration Research Center at the University of California, Berkeley. Simply put: Training standards vary wildly from state to state, and even from county to county. Some states have state-directed training and require retraining before every election, for example, while others do not.

That's always been a concern, Mac Donald says, but with many states implementing new Voter ID laws this year, there's even more room for error.

State elections officials, for their part, say they are working to counter any confusion. Many have worked with other states that previously implemented Voter ID laws to head off issues before they arise.

But training and preparation can only do so much in states where Voter ID laws remain tangled in litigation. The fact remains that some states still could see their preparations swept out from under them by a late-breaking judgment on their specific Voter ID law, a significant concern as Election Day grows nearer.

Court rulings on Wisconsin's Voter ID law, for example, meant that the state's recall and primary elections this summer were held under different standards. Officials there admit the competing decisions sowed confusion when websites weren't updated or voters were asked for IDs after the law had been struck down. Pennsylvania's law, meanwhile, was recently upheld, but is now under review by the state Supreme Court. Others are in question in federal court or under scrutiny by the Justice Department. A federal court decision on the Texas Voter ID law is expected any day now.

The legal wrangling has served to complicate an already complex task, Mac Donald says, as officials looking to prepare for elections under Voter ID are forced to adapt to a moving target.

“They're going to have to be prepared for either scenario,” Mac Donald says. In some instances, states have been forced to train poll workers to administer the election both with and without the Voter ID requirement, with final direction to come shortly before Election Day or when the final legal battle is settled. “That's a problem, obviously.”

For now, officials in states facing the legal limbo are making do the best they can, and trying to take the uncertainty in stride. Pennsylvania is proceeding under current law, “unless and until court tells us otherwise,” says Ron Rumen of the Pennsylvania Department of State.

But that also means they may have to change gears quickly, even though Rumen says officials haven't made any specific contingency plans should a court strike down the law. Still, the truncated timetable is a concern. The state Supreme Court is set to take up the issue in two weeks, but when the issue might be settled is anyone's guess.

“If at some point if the court would stop it we would have to evaluate what the ruling says and go from there,” Rumen says. “The closer to the election, the more difficult it is to make sure everyone understands the law.”