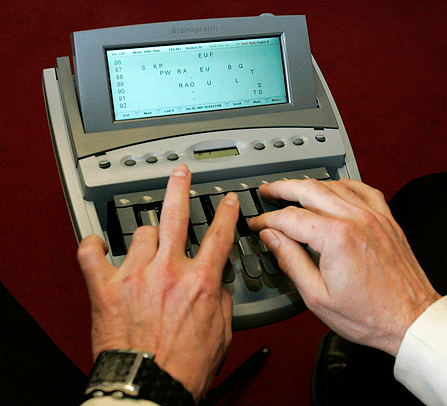 In his novel David Copperfield, Charles Dickens describes the difficulty of learning “the noble art and mystery of stenography.” Dickens wrote from experience: Before becoming a novelist, he worked as a court stenographer. People have practiced the “noble art” for millennia, from the Ancient Greeks to the actor Harvey Keitel, who worked as a court reporter before launching his acting career.

But 162 years after Dickens published his classic novel, a shrinking number of U.S. courts rely solely on human beings to record legal proceedings. In an era of tight budgets, courts in all 50 states have replaced court stenographers—many of whom can type more than 250 words per minute—with digital recording systems. These systems range from simple tape recorders to multiple-camera, motion-sensitive systems.

In Kentucky, video recordings of court proceedings have served as the official court record for 30 years, ever since judges wanted to take back control of the record during a stenographers' strike. But Kentucky's experience also demonstrates that relying entirely on digital recording can be risky: In 2010, a judge in Jefferson County had to rehear a murder case after the court's digital recording system malfunctioned.

While there surely are non-fiscal benefits to digital systems, like speeding up the time it takes to certify the record, a desire to save money is the primary reason courts move away from in-person court reporters.

In 2009, Utah shifted all transcription to private transcribers and created a web-based system where reporters could access all the audio and video files of the court proceedings online. “The impetus for this change,” wrote Utah State Court Administrator Daniel Becker in an article about Utah's reengineering, “was…a result of budget reductions.” Since the transition, Utah has saved more than $1.3 million, eliminated nearly 50 full-time positions and cut the time from transcript request to delivery from an average of 138 days to 12 days for cases not on appeal.

Similarly, in California, the state Legislative Analyst's Office recommended in a 2011-2012 policy brief that the state courts could save $113 million if every court used electronic court reporting. San Francisco Superior Court installed audio recording equipment to replace court reporters in misdemeanor and traffic trials earlier this year and expects to save $1.5 million in ongoing salary savings following the layoffs of 29 court reporters, says Ann Donlan, communications director for the court.

In addition to cost, many courts have moved away from human stenographers because they want to maintain ownership of the court record. In fact, it was this tension that led to the first digital recording system in Kentucky more than 30 years ago, says Kurt Maddox, known as the “chief evangelist” of video court recordings at Louisville, Kentucky-based Jefferson Audio Visual Solutions.

“If (the stenographer) didn't show up, you couldn't have court,” Maddox says, “and from a process point of view, you can see how judges weren't too keen on having others control the workflow of the court.” Over time, Kentucky expanded video recording systems to every court in the state, making it the only state to completely abandon stenography.

Looking to follow in Kentucky's footsteps, three courts in Indiana are participating in a year-long pilot project to make audio tape recordings the official court record. The Indiana courts aren't looking to cut costs, says David Remondini, chief deputy executive director of Indiana's division of state court administration. Instead, they want to shorten the time it takes to get a transcript for an appeal, down from the current allotted time of 90 days to nearly no time at all, since the tape recording of the trial is the official record and no transcription is needed.

Remondini stresses that the pilot isn't designed to put publicly employed court reporters out of work—quite the opposite, actually. “Since courts are under such a tight budget crunch and they're getting more work with no more staff,” Remondini says, “even if a court reporter never typed another transcript they'd have plenty of work to do.”

Less than one month into the pilot, it's already producing some unexpected results: in one instance, an attorney used some of the audio from parts of a trial and played it back to the jury as part of his closing arguments.

Minnesota's Hennepin County, home to Minneapolis, has taken a middle path: It uses both digital and in-person reporting. In 2006, faced with too many trials and too few court reporters, county officials created a centralized court-reporting center, with live closed-circuit video and audio feeds from each courtroom that can be monitored from a central location. Many of the court reporters are also stenographers and can be called in to monitor a trial at the request of the judge or attorneys.

Faced with layoffs and technology changes, the tensions between stenographers and digital system operators can run high. But both concede that digital recording is better for the average misdemeanor or civil suit while stenography is best for high-profile or contentious litigation that merits a real-time transcript so the proceedings can be read back on demand.

In the transition away from in-person stenographers, explains Tamara Halonen, court record coordinator for Hennepin County, nobody was laid off and no positions were eliminated. “There was an element of cost savings in the discussion,” says Halonen, “but the discussion really started because we didn't have enough people to fill these jobs.”

That shortage is likely to get worse as fewer people choose stenography as a profession: The number of people graduating from court reporting programs dropped 61 percent from 1996 to 2006.

Furthermore, there are new opportunities for stenographers outside the courtroom. Stenographers can provide real-time closed captioning for the deaf, or take depositions for law firms or agencies.

The one-time profession of Charles Dickens has transformed into a lucrative field of computerized closed-captioning and real-time transcription where reporters can make upwards of $100,000 per year by working for courts or even more money in closed-captioning for TV or movies.

Employment for court reporters is expected to grow by about 14 percent over the next ten years, the average growth rate for all professions, according to the U.S. Department of Labor.

Catherine Meredith, a third-year court reporting student in Philadelphia, is confident that her job prospects will remain bright far into the future.

“There's a huge need for court reporters because of retirements and not enough people going into court reporting,” Meredith says. “On some level, I'm sure (the courts would) like to replace reporters with all electronic machines, but until it's really sophisticated, that's not going to happen for a long time.”