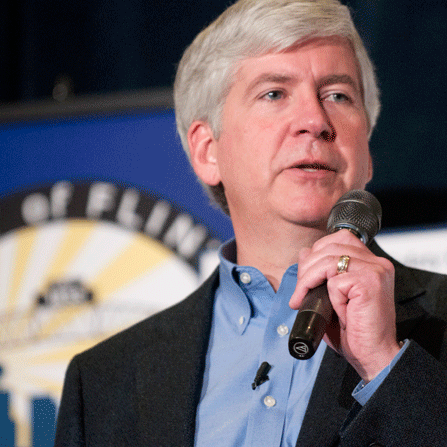 Gerald McEntee had Michigan on his mind in June when he delivered his final address as president of the nation's largest public employee union. “Our sisters and brothers in Michigan are on the front lines in the next critical battle,” McEntee told the American Federation of State, County and Municipal Employees. He declared that the imperative was “defeating Governor Rick Snyder's anti-worker and anti-American emergency manager's bill. These managers are local dictators who rip up union contracts.”

Focusing on an emergency manager bill in one state might seem an unlikely valedictory for a legendary labor leader who has served his national union as president for 30 years. But it made sense to McEntee. Repealing the emergency manager law in Michigan is among labor's highest priorities for November because of the level of authority it gives gubernatorial appointees over the affairs of municipalities in fiscal distress. State-appointed emergency managers can change or suspend union contracts, privatize assets and under certain circumstances, even dissolve whole units of government.

Opponents such as McEntee say the law is undemocratic because it leaves local elected leaders virtually powerless in the face of unelected, state-appointed bureaucrats with “dictatorial” control. They accuse the state of starving municipalities and school districts of funding so that they can swoop in and grab power. The debate has a racial element as well because so many of the emergency managers are white and so many of the communities and school districts involved are overwhelmingly black.

The 2011 emergency manager law meant greatly expanded powers for the state financial advisers who had already been on the scene in Pontiac, Flint, Benton Harbor, Ecorse, and the Detroit Public Schools. The state officials working in those cities received an upgrade in title to “emergency manager” under the new law to reflect their more sweeping role. Two additional school districts, Highland Park and Muskegon Heights, have come under state control since 2011. Meanwhile, several other cities, including Detroit, are operating under consent agreements that include significant state input on budgetary and operational matters but fall short of a full takeover.

Proponents of the law, including Republican Governor Snyder, argue that expanding the emergency manager program was necessary because a growing number of local entities appeared poised for serious fiscal trouble. The new law was designed to prevent state takeovers whenever possible by detecting fiscal distress earlier and bringing the state in as a partner while communities righted their own problems.

“From the state's perspective, it has been a success,” says Terry Stanton, a spokesman for the Michigan Department of Treasury, which oversees the program. “The key is to assist local units as quickly as possible. If you look at where the finances were in those communities and where they are today, there are an awful lot of positives.”

The strong powers that emergency managers can exercise in the event of a full-fledged state takeover are meant to be an incentive for local elected leaders to prevent such a takeover by making the hard decisions themselves and negotiating new arrangements with their public employee unions.

When emergency managers are brought in, the state says, the circumstances are so extreme that drastic action is needed on both fiscal and operational issues. Claims that the law is undemocratic, the state argues, fail to understand that the arrangement is meant to be short-term and used only under drastic circumstances as a way to avoid the even more drastic steps that could be taken through the federal bankruptcy process, which could harm the entire state's standing with bond rating agencies.

“It was a complete mess when I got to Ecorse,” says Joyce Parker, who serves as emergency manager of both the city of Ecorse and the Highland Park School District. She says there were questions about why the state hadn't gotten involved earlier.

Parker was brought to Ecorse in 2009 shortly before the city's mayor, Herbert Worthy, pleaded guilty to conspiracy to commit bribery. A federal corruption probe found that he had accepted multiple cash bribes — amounting to more than $30,000 — in return for using his position as mayor to ensure that a particular private vendor, Michigan Municipal Services, would have a lucrative contract with the city. By terminating that contract and bringing public works back inside city government, Parker says she's reduced the city's annual public works costs from $3 million to $970,000 a year.

Both the city's budget and service levels have stabilized to the point where Parker is only spending two days a week in Ecorse and is looking toward handing off power to elected officials soon.

The Politics of Repeal

In advance of the vote on repeal in November, the campaign against the emergency manager law is curbing the managers' power for at least a few months. As provided under Michigan law, the statute in question was suspended temporarily upon the repeal measure's certification for the ballot in early August.

Until November, Michigan is operating under a previous law, which grants state-appointed local managers less sweeping powers and requires them to work more closely with elected officials. Managers still have the power of the purse strings — elected officials cannot appropriate money without their approval — but the managers cannot change union contracts or privatize assets.

In the brief period before the repeal vote, city officials in Pontiac, Flint and Benton Harbor have begun making emergency managers' lives difficult by wresting back as much authority as they can. In Benton Harbor, Emergency Financial Manager Joseph Harris was surprised when local elected officials passed a series of 20 resolutions removing and replacing various appointees to boards and commissions immediately after the law's suspension. "The whole idea was to dismantle the organization that I had assembled," Harris says. Eventually, Harris was able to void the moves.

Harris can point to some tangible accomplishments in Benton Harbor. The small city of 10,000 spent an average of $1.5 million more than it took in during the decade before Harris became state-appointed manager. The previous finance director had no accounting experience and the city was spending $80,000 to $100,000 each year on bank overdraft charges.

Benton Harbor's budget still isn't perfectly balanced, but it's far closer, the result of significant layoffs and reductions in benefits for the remaining workforce. Those savings never would have been possible without the 2011 law, Harris insists.

Former State Treasurer Robert Kleine, who oversaw the state's program under the milder version of the law from 2006 to 2010, believes many of the changes included in the 2011 revision were necessary in order for the state to provide effective oversight.

Still, Kleine believes that some of the changes went a little too far. “I think there should be some ability to modify contracts, but I don't think we should eliminate collective bargaining, certainly not for five years,” he says. The power the law gives emergency managers over local pension funds also makes him nervous. “There is too much chance for mischief in that sort of situation,” he says. “People's livelihoods depend on [those pensions].”