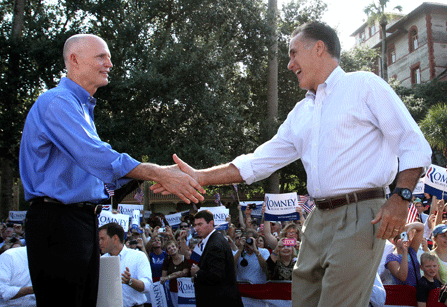 Tropical Storm Isaac has upended Republican Florida Governor Rick Scott's chance to be in the spotlight tonight (August 27) on the opening night of the 2012 Republican National Convention in Tampa. But even if the governor hadn't canceled his speech, his standing with the party, and the man GOP delegates will formally nominate for president, are anything but settled.

Scott was not the choice of the GOP establishment to be governor of one of the country's most prized battleground states in the contest for president. A wealthy former hospital executive and political outsider, he stunned the party two years ago with his win in the Republican primary over Bill McCollum, the state's attorney general and a former congressman.

Scott went on to a narrow general election victory over Democrat Alex Sink with the backing of the Tea Party, the same faction of voters whom Romney is actively wooing. But there is considerable distance between the two men, as there still is between Scott and most of the Florida Republican Party. “The governor is further right than the GOP mainstream,” says Charles Barrilleaux, a political science professor at Florida State University.

“People here say that the GOP organizers are basically holding their noses while trying to appear gracious,” adds Anthony Brunello, a political scientist at Eckerd College in St. Petersburg. “The RNC organizers are seeking to avoid `drama,'” he says, “but it is a wary relationship.”

Romney campaigned in Florida numerous times this year before agreeing to appear on the same stage with Scott. When a reporter from local station WPTV asked Scott earlier this summer if he thought Romney was “dissing” him by not appearing with him, the governor replied, “I know he's working to become president and I'm working hard to become a very successful governor; so we are both busy.”

Scott also has rejected a report from the Bloomberg news organization that Romney asked Scott to tone down his statements about Florida's economic improvements because they clash with the presumptive Republican nominee's message that the nation is suffering under President Obama.

Scott says this isn't true and in more recent statements has tried to address it. "Even though we have a president that is making it much, much more difficult to do well, in Florida our economy is getting better," Scott said, according to The Miami Herald, when the governor made his August 13 appearance with Romney in St. Augustine. "Just think what the state could do then if we had the right president."

Only last week, Scott touted that Florida's unemployment rate had dropped the fastest in the nation, but the governor is far from keeping pace with his campaign promise to create 700,000 jobs in seven years. As of June, Scott's jobs added count was 105,500, according to PolitiFact.com.

Some of Scott's most notable policies have only elevated his Tea Party credentials.

He was one of the first governors to vow to opt out of expanding Medicaid after the U.S. Supreme Court ruled on the legality of President Obama's federal health care law. He has pushed to require drug testing for welfare recipients. He defends a state law that makes it a crime for doctors to ask patients if they own guns, known as “Docs vs. Glocks.” He is intent on purging non-citizens from voter registration rolls before the November 6 elections, and he wants to limit early voting.

But Scott is among the least popular governors in the country, with 52 percent of Florida voters saying they disapprove of the job he is doing, according to results from a Quinnipiac University/ CBS News/New York Times Swing State Poll. One poll earlier this summer from Public Policy Polling reported that Scott would lose to Sink if the elections were held today and that former Republican governor Charlie Crist, now an independent, also could easily defeat Scott.

Scott's lack of political experience may be hurting him. “He's a businessman, he's not a politician, not before now,” says Lance deHaven-Smith, a public policy professor at Florida State University. “He may be right from a business point of view, but from a political point of view, it doesn't work.” For example, Scott closed the state's only tuberculosis hospital in the midst of a TB outbreak and participated in a Special Olympics event on the same day that he signed a bill cutting public programs for the disabled.  He also cut funding of services for the mentally ill, including children. “It looked awful,” says deHaven-Smith.

Given far more prominent roles at the convention are U.S. Senator Marco Rubio, who made his name as the speaker of the Florida House and will introduce Romney as the nominee, and former governor Jeb Bush who is still popular in Florida. And New Jersey Governor Chris Christie will give the keynote address.

But for now, that hardly matters.  Scott declared a state of emergency on Saturday and then later that evening announced he was canceling his speech and all other scheduled convention-related activities on Sunday through Tuesday so that he could respond to storm-related matters.

It's unclear whether Scott will continue to be able to play the role of the unconventional outsider in a way he had planned. The governor has agreed to blog this week from the convention for The Huffington Post, considered to be a left-leaning news site.

“It's another channel to communicate with folks. It's not strictly liberal,” Scott's spokesman Brian Burgess confirmed to WPTV.”I think it's important that we take advantage of opportunities like that. It has a lot of reach.”