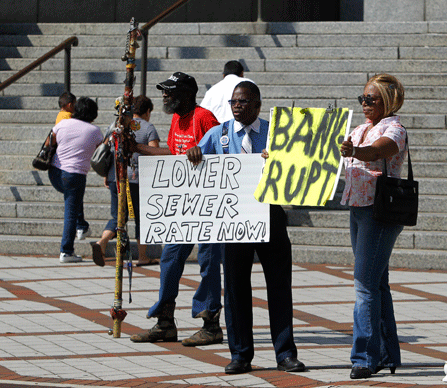 After Alabama's worst-ever tornado outbreak struck two-thirds of the state last year, killing 230 people, the governor and lawmakers immediately united to lead an effort to clean up debris, speed aid to victims and repair and rebuild roads, bridges, schools and other public buildings.

But months later, when Alabama's largest county was nearing insolvency—the financial equivalent of a natural disaster—state leaders failed to intervene to avert the largest county bankruptcy in U.S. history. Jefferson County, which includes Alabama's largest city, Birmingham, is facing years of restructuring its finances, paying creditors and trying to deliver services that have been cut sharply for four years.

“We're letting Jefferson County die on the vine,” says state Representative Jack Williams, a Republican from the Birmingham suburbs who worries that the bankruptcy will impede economic growth in the jurisdiction.  With about 660,000 people, Jefferson County brings in the most revenue of Alabama's 67 counties.

Cities and counties across the country are confronting weak revenues, reduced state aid, declining property values, escalating retirement costs and service cuts. How states respond—or fail to respond—to distressed local governments has been getting unusual attention in the last year, but Alabama's letdown of Jefferson County stands out as an example of political dysfunction: In essence, because of a historical disdain for urban county governments and a fear of raising taxes, state leaders have taken their most important local government out of play in the global competition to recruit job-growing businesses.

“The state is like a parent to a city,” says James Spiotto, a Chicago attorney who specializes in municipal bankruptcy matters. “Sometimes you want to call Child and Family Services on them.”

Contrast Alabama with Pennsylvania, where Governor Tom Corbett's administration recently offered to prop up struggling Scranton with an interest-free loan and grants if city officials agree on a financial recovery plan. An even better comparison is Rhode Island, whose capital and largest city, Providence, has been fighting to stay solvent. There, Governor Lincoln Chafee and some lawmakers have backed the city's plan to cut workers' pensions, move retirees onto Medicare and lift expensive state mandates. With the state's help, Providence trimmed its budget gap and is proposing to borrow money to fix its streets.

In Alabama, there is plenty of blame to go around: Governors, state legislators, county commissioners, Republicans, Democrats and civic and business leaders all have been incapable of halting Jefferson County's slide.

Part of the difficulty is that officials must sort out three separate but related issues simultaneously. One is the bankruptcy, which stems from the mismanaged, corrupt financial dealings to pay for rebuilding the county sewer system.

At the same time, Jefferson County faces a crisis in its operating budget. Officials have whacked $132 million from the spending plan in the last two years and need to cut another $40 million this year to stay in balance. The Alabama Supreme Court last year struck down an occupation tax on workers' salaries that provided more than a quarter of the county's revenue, and state lawmakers have been unable to approve legislation replacing it with a new tax.

Viewed through the lens of Alabama history, the state's failure to intervene in Jefferson County is easier to understand. The 600-page state Constitution drafted in 1901 reinforced the long-held view of rural lawmakers that urban county governments should have little power. Alabama is a Dillon's Rule state, meaning the legislature determines how much authority counties can have, which is why Jefferson County must have lawmakers' permission to raise revenue. Lawmakers are loathe to give counties approval to levy taxes to avoid having their political opponents brand them as tax raisers. (By contrast, Alabama cities do not need state approval to manage their finances.)

Also, Alabama has a bare-bones state government without experts to monitor the financial condition of local governments or advise them when they need help. Lawmakers did not rescue the town of Prichard when its public-pension fund ran out of money in 2009 and officials stopped sending retirees their checks as state law requires. The state often punts its problems to the federal government or courts, which have had to untangle messes created from crowded prisons, gerrymandered legislative districts, inadequate mental health care and lack of civil rights protections.

“The problems at the state level are so severe that the Legislature feels it has its hands full just dealing with the state's financial problems,” says Bill Stewart, a professor emeritus at the University of Alabama. Next month, Alabama voters will decide whether to amend the state Constitution to provide money to balance the state budget.

State leaders have not ignored Jefferson County. Current Governor Robert Bentley and his predecessor, Robert Riley, both Republicans, convened several meetings of elected officials and county business leaders to press for a solution. Riley unsuccessfully tried to negotiate an agreement with creditors. But neither governor elevated the county's crisis as an urgent state matter, as only a governor can do.

“The primary problem is, it's not viewed as a statewide issue,” says David Carrington, the Republican president of the Jefferson County Commission.

He worries that the state will miss opportunities to add jobs and revenue if state leaders do not help resolve the county's troubles. Alabama recently has reinvented itself as a center of automobile and aircraft manufacturing, but such companies have bypassed Birmingham for Tuscaloosa, Montgomery, Mobile and Anniston.

Bentley has said he understands the stakes involved, calling the bankruptcy “an impediment to economic growth.” A spokesman for the governor, Jeremy King, stresses that the leadership and fiscal breakdown is unique to Jefferson County and does not reflect on the rest of the state. Bentley is willing to intervene to help find a solution, King says, but the governor cannot go to the Legislature with a proposal until Jefferson County's senators and representatives first reach a consensus.

“Without a unified delegation to go to Montgomery, there's very little that Jefferson County can get done,” says Mark Griffith, a professor at the University of West Alabama.

The county's eight senators and 18 representatives are split on proposals asking the GOP-controlled legislature to allow Jefferson County to impose taxes that would help the county cover its budget gap and emerge from bankruptcy faster. Urban lawmakers generally favor taxes while suburban officials oppose them because they say their constituents do not see why they should bail out a local government whose former elected officials ripped them off while raising sewer bills to finance their malfeasance. Seventeen people were convicted of bribery and fraud in the sewer scandal, which centered on risky interest –rate swaps connected with refinancing bonds.

The same thinking is embraced by many lawmakers in the rest of Alabama. In the last two years, proposals permitting Jefferson County to raise taxes have cleared the House or Senate but have never been approved by both chambers and sent on to the governor.

“In areas outside Jefferson County, the feeling is why should we ‘bail them out' for their poor financial management, for their bribery and kickbacks and for what was a seedy, nefarious indebtedness,” says state Sen. Arthur Orr, a Republican from the Huntsville area.

Replies Carrington, “That's an excuse for not solving the problem.” Carrington, whose two predecessors on the county commission went to prison, says that he won election in Jefferson's richest suburban district with support from residents who back his rescue efforts. The county has laid off hundreds of workers, closed satellite courthouses, crammed its jails beyond capacity, stopped responding to minor traffic accidents and curtailed mowing, weeding and repaving.

“I've tried to stress to my colleagues that their counties are not strengthened by Jefferson County being weakened,” says state representative Williams. “What we're allowing to happen is not good for Jefferson County or the state of Alabama.”

Orr says economic studies are inconclusive whether Jefferson's bankruptcy will spill over to damage Alabama's other metropolitan areas. So far, the Chapter 9 filing has not affected the state's borrowing costs. Surveys show job creation is lawmakers' top priority, and Alabama's business taxes are among the lowest in the country. Still, Carrington says potential businesses that once listed Jefferson County/Birmingham among their top five potential sites now have dropped the area lower.

Outside Alabama, analysts who follow municipal finances say lawmakers' recalcitrance can only worsen the state's ability to emerge from the Great Recession. Matt Fabian, managing director of Municipal Market Advisors, calls Alabama an example of “state exacerbation” instead of intervention.

The next session of the Alabama Legislature will not start until February. Meantime, the U.S. bankruptcy judge overseeing Jefferson County's Chapter 9 recently said it was too early for him to set a deadline for county officials to come up with a plan to repay creditors. Of the $4.23 billion in debt, more than $3 billion was borrowed for improving the sewer system.

Carrington has a suggestion, tongue in cheek, for how to nudge the opposing camps to take action. The biggest event in the state is the Alabama-Auburn football game. The day before the Nov. 24 game, he says, bring all the local and state officials together in Birmingham, lock them in a room and tell them they can't go to Saturday's game until they figure out a way, once and for all, to help save Jefferson County.