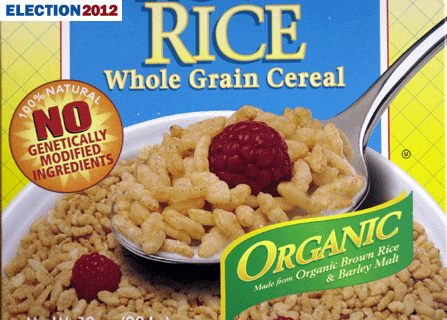 A ballot measure to require labeling of genetically modified foods has brought big money and prominent players to the table. (AP)

California's Proposition 37 started out as one ex-farmer's low-budget quest to get genetically modified foods labeled at the grocery store. Now, with less than three months until election day, it's turning into a multimillion dollar fight: the natural foods industry vs. agribusiness and biotech companies. So far, Prop 37 opponents have spent nearly $25 million in an attempt to defeat the initiative.

If the “California Right to Know Genetically Engineered Food Act” passes, California will become the first state in the nation to require that food manufacturers label all food, raw and processed, that contains ingredients made from genetically modified organisms (GMOs). The technique is used in the laboratory to create seeds that are, among other things, resistant to pesticides.

Proponents of the measure, including Pamm Larry, the one-time farmer/midwife who spearheaded the proposition, argue that Californians have a right to know what kinds of foods they are consuming. Opponents insist that requiring such labels would place an undue burden on food manufacturers and would cost consumers more at the checkout lane.

“This will send a very loud message,” Larry says. “I think once we get this voted on, other legislators [in other states] are going to start giving this another look. All eyes are on California. Once this happens, I believe there's going to be a snowball effect.”

The pro-labeling side has not done well in efforts across the country so far. Labeling laws have failed in 19 states. Seventy percent of Oregon voters opposed a ballot initiative similar to California's in 2002. This past April, Vermont's House Agriculture committee voted 9-1 in favor of a labeling bill, but the legislation failed to make it to a floor vote. The same month, similar legislation stalled in Connecticut. But if Prop 37 passes and two other New England states pass similar legislation, the Connecticut law will immediately go into effect.

“You're not supposed to keep information from people in an open society,” says Representative Richard Roy, a sponsor of the Connecticut labeling law. “I don't know if GMOs are good, bad, indifferent. I just know they're not telling us. And to me that is wrong.”

One reason for the misfire in Vermont, according to the Burlington Free Press, was Governor Peter Shumlin's concerns that a labeling law would not survive a constitutional challenge. Precedent shows that the governor's concerns may have been well founded: A similar law requiring the labeling of bovine growth hormones was struck down in federal court in 1996.

The one anti-labeling voter on the Vermont House Agriculture Committee, Representative Norm McAllister, is a dairy farmer who says he has used genetically modified corn to feed his livestock. He says a labeling requirement would hurt Vermont's burgeoning special foods industry and might violate interstate commerce laws.

“People have phobias against a lot of things and they should have the right to know what's in their food,” McAllister says. “But we cannot go it alone. We're such a small state. I wasn't worried about us dealing with Monsanto; I was worried about the [Justice Department].”

For the past 22 years, the Food and Drug Administration has held that genetically engineered food is safe, according to Michael Rodemeyer, a lecturer at the University of Virginia School of Engineering, and the former director of the Pew Initiative on Food and Biotechnology. Science, so far, has been inconclusive about the safety of genetically engineered foods, Rodemeyer says. The U.S. Department of Agriculture places some restrictions on genetically modified crops deemed to be harmful to other plants.

According to a report by the California Legislative Analyst's Office in 2011, 88 percent of all corn and 94 percent of all soybeans grown in the United States come from genetically engineered seeds. Processed foods from Coca Cola to frozen pizza typically contain some form of corn or soybeans, such as high fructose corn syrup, so most packaged goods contain GMOs. The Legislative Analyst's Office concludes that 40-70 percent of food sold in California grocery stores have genetically modified ingredients. Certified organic food is GMO free.

Because California is such a large market, if Prop 37 passes, companies might decide to label their products nationwide, rather than have separate procedures for goods sold in different states, says Bob Ehart, senior policy and science adviser at the National Association of State Departments of Agriculture.

The passing of Prop 37 “could be a ricochet” at the national level, Ehart says. “It may end up being more cost-effective for them to comply with the California circumstances than not. I don't think we know what the economic impact will be.”

Food manufacturers would have up to 18 months to make their labeling compliant with the new law. They would be barred from advertising any genetically modified food as “natural.”

According to a poll conducted by the California Business Roundtable and Pepperdine University, 69 percent of Californians are in favor of Prop 37. But over the coming weeks, it will face an intense campaign of opposition on the part of groups ranging from food and beverage companies to the Grocery Manufacturers Association to several California chapters of the NAACP. Monsanto, Dow and DuPont, leaders in biotechnology, have made hefty contributions to defeat the proposition: $4.2 million, $1 million and $4 million, respectively.

Financial backers on the pro side of the proposition include Mercola.com, a health products company; Dr. Bronner's Magic Soaps; and Lundberg Family Farms.

“It's just a simple issue of people to be able to choose what they want to eat,” says Grant Lundberg, CEO of Lundberg Family Farms, who donated roughly $250,000 in support of Prop 37. “There isn't an understanding of the long-term health and environmental impact and the impact on the food supply channel.”

Kathy Fairbanks, the spokeswoman for Say No to Prop 37, counters that the law is deceptive and would provide loopholes for some foods and not others. Milk from cows that have eaten genetically modified food wouldn't have to be labeled, while soy milk processed from genetically modified soybeans would. If Prop 37 passes, she says, the law will open the door to excessive litigation.

“What this allows,” Fairbanks argues, “is a trial lawyer to grab a package of granola bars, flip over the back and potentially spot an ingredient that could be GE, like soybean oil... The lawyer doesn't have to have proof, can file a suit alleging label violation, can file a suit against the grocery store, against the processor ... against the food distributor, all the way down to the family farmer who grew the corn.”

But Pamm Larry, the crusader who got the proposition on the ballot, says that farmers helped write the initiative. In January 2011, she says, she became troubled about what she saw as the unknowns of genetically modified foods.

“I decided that it was my job” to see that genetically engineered foods were labeled at the grocery store, Larry says. “It came to me as a lightning bolt realization.”

She traveled the state, forming alliances with different communities, until she'd created a grassroots movement of 90 different groups such as the Organic Consumer Association and Democracy Food Now. By May of this year, she'd collected more than the number of signatures needed to get Prop 37 on the ballot. The Center for Food Safety helped draft the language. Larry says it was their intention to keep the law as simple as possible, without adding the burden of extra bureaucracy. (The law, if passed, will be monitored by the California Department of Health.)