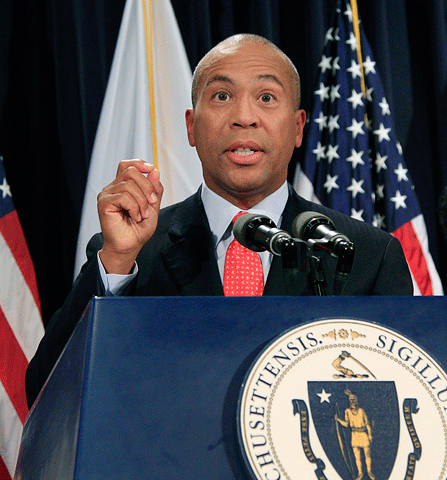 Like the federal Affordable Care Act, the 2006 Massachusetts health law it was patterned after was aimed primarily at providing health coverage for the uninsured. There's no question it did that. Fewer than 2 percent of adults and 1 percent of children remain uninsured in the state.

But like the federal law, it had few provisions aimed at reducing costs. Now Massachusetts, which has the highest per capita health spending of any state in the country, is moving on the cost front. A bill signed last week by Democratic Governor Deval Patrick seeks to cut expenses by shifting the entire health system away from traditional open-ended fee-for-service medicine and setting legal limits on what the state and its residents are willing to pay.

According to a statement by Patrick, the new law “cracks the code on cost,” by “ushering in the end of fee-for-service in Massachusetts in favor of better care and lower costs.”

But whether it will accomplish its new mission remains to be seen. Both opponents and supporters of the new state law say its implementation and ultimate success rely largely on rules that have yet to be written. Even then, its premise — that cutting back on fee-for-service will lower costs — has yet to be proven.

At this point, the law has few detractors. It passed nearly unanimously in the state Legislature and was supported by most in the health care community. The only complaints have come from free-market conservatives who argue that a better approach would have been to let market forces drive down health care costs by giving consumers more control over their health care purchases.

When he unveiled the bill last year, Patrick said he understood why his predecessors "decided to put cost control off to another day — because if you think access was hard, wait until you take on cost control." Rising costs are a persistent problem everywhere, but no state has gotten very far trying to rein them in. Minnesota has a 2008 law that regulates some health care costs and Maryland sets limits on hospital budgets, but neither has taken the comprehensive approach Massachusetts is launching.

Massachusetts 349-page law (S.2400) takes effect November 15. Its goal—to eliminate $200 billion in health care spending over the next 15 years — is achieved by setting fixed limits on the growth of health care costs. From 2013 through 2017, total cost increases cannot exceed the growth in Massachusetts' gross state product (GSP). From 2018 through 2022, the cap is set at a half a percent below GSP growth; after 2022, the threshold goes back up to the GSP growth rate.

State funded health care programs — including Medicaid, employee and retiree benefits and the state's low-income subsidized health plan known as Commonwealth Care — are charged with moving at least 80 percent of beneficiaries out of fee-for-service plans by 2014. Instead, state-funded plans must use “alternative” delivery and payment systems including patient-centered medical homes, managed care, and so-called global payment systems such as accountable care organizations.

For now, the law's cost ceilings are attracting the most attention. If recent history is any indicator, the new limits mean that doctors, hospitals and other health care providers will have to cut their costs nearly in half, a requirement that already has prompted Moody's credit rating agency to report that the state's hospitals face limited growth potential.

Years in the Making

Less than a year after the 2006 law was enacted, state officials expressed concern that rising costs threatened to unravel the state's early progress in reducing the number of uninsured people. Individuals and small businesses were complying with the new mandate in huge numbers. But if prices kept rising, policy makers predicted that many would be unable to keep paying the premiums.

Attorney General Martha Coakley was among the first to attack the cost problem. Examining otherwise confidential contracts between medical providers and insurers, her office found wide disparities in price among providers working in the same geographic areas and offering the same types of services. According to a 2011 report, price variations correlated to "market leverage," not quality of care or the nature of the population served.

In addition to cost increases resulting from new technologies and treatments, a major cause of what economists call "market failure" in the Massachusetts and U.S. health care industries is the ability of prestigious hospitals and large medical practices to command just about any price they want from insurers. The same is true for hospitals in some monopoly markets in rural areas.

Under the new law, contract prices between providers and insurers must be made available to state regulators. A team of boards, task forces and commissions, including 266 new appointees, will be charged with tracking the health care industry, and given authority to fine providers as much as $500,000 for failure to comply with the law's performance targets.

In addition to regulating health care markets, says Kate Nordahl of the Massachusetts Medicaid Policy Institute, the law offers “a huge opportunity for public purchasers to come together and have tremendous leverage on the market.” About 54 percent of the state's Medicaid beneficiaries are currently covered by managed care plans that do not rely on fee-for service, according to the Kaiser Family Foundation. That compares to a national average for managed care in Medicaid of 71 percent. The new law requires 80 percent of the state's 1.5 million enrollees to be covered by non-fee-for-service plans.

Few Republican-led states are likely to show much interest in what Massachusetts is doing. In general, Republican governors shun stiff market regulation, opting instead for free market approaches to lowering health care costs. Most GOP cost containment policies include health savings accounts and high-deductible health insurance policies that encourage consumers to shop around for the best values in medical care.

In Massachusetts, Joshua Archambault, health policy director at the free market Pioneer Institute, says the state missed an opportunity to achieve real cost containment. Instead of burdening the health care system with more bureaucracy and millions in surcharges, Archambault argues, the state should have provided “financial incentives for individual patients to take charge of their own medical care.”