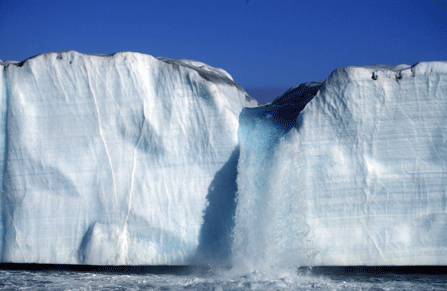 Perhaps more than any other state, California has acted on the scientific consensus that global climate change is real and man-made. By 2020, California utilities will have to obtain a third of their energy from renewable sources. And in November, the state plans to roll out a “cap-and-trade” system to limit greenhouse gas emissions. Its development plans account for rising sea levels, eroding coastlines and dwindling fresh-water resources.

Now, California Governor Jerry Brown is peppering those policies with a bit of attitude.

“Humanity is getting dangerously close to the point of no return,” the Democratic governor said in a statement. “Those who still deny global warming's existence should wake up and honestly face the facts.”

The website, called Climate Change: Just The Facts, includes links to peer-reviewed studies on the issue, and a page that aims to refute common arguments denying the existence of climate change.

“A small but vocal group has aggressively spread misinformation about the science, aiming to cast doubt on well-established findings and conclusions,” the site says. “Their goal is to create confusion and uncertainty, thereby preventing meaningful action to remedy the problem.”

It's not rare for states to publish websites displaying information about climate change and its impacts. Many states — including Washington, Iowa, Arizona and New Mexico — have formed scientific panels in recent years to advise policymakers on climate change. And in some cases, those efforts have included educational outreach. But, with its edgy tone, California's website stands out.

It is being launched at a time when conservative legislators in some states are pushing back against efforts to address the effects of climate change — and in some cases even prohibiting the use of the term.

A new North Carolina law bars coastal planners for the next four years from weighing projections of rising sea levels. The Republican-controlled legislature approved the measure after a state-appointed panel found that a 39-inch sea level rise during the next 90 years could threaten some 2,000 square miles of coastal land. The bill's backers feared that the study would harm coastal economies by curbing development. North Carolina Bev Perdue, a Democrat, allowed the bill to become law without her signature earlier this month.

The measure, mocked nationally by the likes of comedian Stephen Colbert, originally would have mandated that the state estimate the rise in sea level by extrapolating historical yearly averages. Using that approach, which was dismissed by scientists, would produce much more modest projections.

“North Carolina became the first state to directly contradict that overwhelming, peer-reviewed scientific consensus and to tie the hands of localities that would like to plan pro-actively for these changes,” wrote Rob Young, a professor of coastal geology at Western Carolina University, for Yale Environment 360.

Meanwhile in Virginia, lawmakers scrubbed the terms “climate change” and “sea level rise” from a bill requesting a state-funded study on coastal flood risks, the (Norfolk) Virginian-Pilot reported in June. The phrase “recurrent flooding” was substituted for the phrases, which Republicans said were liberal-leaning. And in Tennessee last April, lawmakers approved a measure allowing public school teachers to challenge established science on evolution and climate change without fear of discipline.

Those efforts to rebut climate change coincide with a well-known critic's change of heart.

“Call me a converted skeptic,” Richard Muller, a physics professor at the University of California at Berkeley, wrote in a New York Times editorial published last month.

Muller, founder of the Berkeley Earth Surface Temperature project, once doubted the existence of climate change. But his group's analysis has convinced him that the phenomenon is both real and man-made. The researchers concluded that the average temperature of the earth's land had risen by two and a half degrees Fahrenheit over 250 years, with an increase of one and a half degrees over the past 50 years alone — findings bolder than those of the UN's Intergovernmental Panel on Climate Change.

“Moreover, it appears likely that essentially all of this increase results from the human emission of greenhouse gases,” Muller wrote.