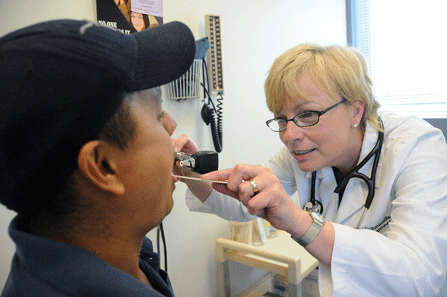 Registered nurses and nurse practitioners are among the skilled workers state governments have had the most trouble attracting and keeping. (AP)

Over the past few years, Kansas has worked to streamline government and reduce the size of its workforce through hiring freezes, retirement incentives and layoffs, and by leaving vacancies open when employees depart.

But now some of the state's agencies are beginning to wonder if there is such a thing as too much streamlining. They find themselves lacking the ability to compete with the private sector for skilled workers. Corrections officers, health care workers and engineers are among those proving difficult for the state to recruit and retain.

It would be premature to declare that Kansas and other states are in the midst of a widespread worker shortage. The weak national economy continues to drive large applicant pools for many lower-level state jobs. But as state agency hiring has picked up after a long period of workforce reduction, some agencies are experiencing recruitment challenges for positions that require specialized skill sets. The situation has been further complicated in many states by high volumes of veteran workers eligible for retirement, cuts to salaries and benefits that were made during the recession, and a decline in the sense of job security and public service that have long been state employment's strongest selling points.

"We're not there yet for most states only because we have still have very high unemployment rates," says Jeffrey Keefe, a professor of labor and employment relations at Rutgers University. “Some states may be able to scrape by for a few years, but recruitment will become a major issue in the future, especially in education.” Keefe says state recruitment challenges will be far more acute for college-educated workers, who typically make less in state government than they can in the private sector, than for lower-skilled workers, who typically make more in state government than they would in the private sector when benefits are taken into account.

States have long counted on job security and strong benefits packages to make up for salaries that often lag behind the private sector, says Neville Kenning, vice president and head of state government consulting for the Hay Group, a human resources firm that works with 30 states on compensation issues. But the mix of benefits that states have traditionally offered will not be effective at luring the young workers they need to replace an expected exodus of retirees, he says. “The traditional compensation design of the public sector is not what the younger generation is looking for,” he says. “They want salary today, they want options on health insurance and they want portability on their retirement plan."

Larned State Hospital in the western part of Kansas is currently so short-staffed that it is in danger of losing its accreditation. The mental hospital is currently recruiting for 15 of its 37 licensed practical nurse positions and 23 of its 84 registered nurse positions, a daunting task even in a relatively weak economy given its low pay scale.

“People have left to pursue better opportunities,” says Angela de Rocha, communications director for the Department for Aging and Disability Services, which houses the hospital. “Then the people still there are asked to work more overtime, and that encourages them to pursue other opportunities. It's sort of a circular process with a general spiraling down.”

The legislature has appropriated emergency funding for salary increases that de Rocha hopes will aid the recruitment process. Those began kicking in for registered nurses in late July.

These problems with wage competitiveness weren't exactly a surprise. The Kansas legislature recognized back in 2006 that state salaries were lagging far behind the private sector and contracted with the Hay Group to do a comprehensive market evaluation of its competitiveness and devise new pay scales. The Hay Group benchmarked compensation for state positions against what employees would make for similar work at other public and private employers in Kansas and seven surrounding states. Kansas state jobs were found to be an average of 9 percent behind market, with some state positions nearly 40 percent behind what other employers were paying.

Consultants worked with the state to develop a process for continuous benchmarking and a five-year plan for bringing all state positions closer to market compensation. But during the recession, implementation of the plan was delayed, and many positions are now further behind market than ever, according to state figures.

Recognizing that as the economy improves, interest in other state jobs may wane if starting salaries aren't increased, the legislature approved $8.5 million in raises in the current budget to be allocated to positions that are lagging the furthest behind the market. “Right now we have still generally been having pretty decent applicant pools to consider,” says Kraig Knowlton, director of the Kansas Office of Human Resources. The state is in discussion with unions about how those funds will be allocated and hopes to finalize plans by early September.

In neighboring Missouri, the state's Personnel Advisory Board recently recommended a 3 percent general increase and higher adjustments for certain positions for the upcoming budget year, citing salaries that lag an average of 28.1 percent behind the private sector. Current annual turnover rates are 43.8 percent for entry-level licensed practical nurses and 38 percent for entry-level registered nurses.

Except for cost of living adjustments, Missouri state employees haven't been given a raise since 2000, the recommendations note. “Agencies cannot, in good faith, point to the pay range and suggest that employees will progress through the range throughout a career,” the recommendations say. “The State may experience problems in filling positions, may be forced to fill positions with candidates who possess marginal qualifications, or, even worse, be forced to reduce the minimum qualifications for job classes in order to fill them.”

North Dakota has a different sort of problem. Its 2.9 percent unemployment rate is by far the lowest in the country. But the booming oil industry has left the state government with severe hiring challenges. A few years ago recruitment problems were limited to jobs that involve physical labor, but that has spread to nearly every state agency because of competition not just from the oil industry but from the myriad other employers who have benefited from the boom. Soaring housing prices also make it difficult to lure workers to jobs in the western part of the state.

Law enforcement personnel, social services agencies and the Department of Transportation have all been particularly hard hit. “The oil industry isn't shy about paying $80,000 to $90,000 for a truck driver,” says Ken Purdy, compensation manager for North Dakota Human Resources Management Services. “That's something our Department of Transportation couldn't compete with.”

Like Kansas, the North Dakota legislature commissioned the Hay Group to benchmark its salaries against the market and propose a new pay plan. On average the firm found that North Dakota salaries were 7 percent behind the market. After a year delay, the legislature has partially implemented the plan but without any funding. As of July 1, agencies are expected to follow new pay brackets but have to find the money to meet the minimum requirements elsewhere in their budgets. “We like the new system because it is market-based, but we'll have challenges moving employees into the new ranges unless the legislature allocates some funding,” says Laurie Hammeren, director of North Dakota Human Resources Management Services. The new system has exacerbated the pay compression among state employees, with new workers making almost as much as veteran workers in some fields.

The problem isn't one of budget constraints. The state's surplus is expected to hit $2 billion within a year, as Stateline has reported. The issue is one of politics. Purdy says that the legislature expected different results when it commissioned the detailed study.

“I think they thought we were going to find that we were more competitive than we were," he says. “We have a pretty fiscally conservative legislature and spending a bunch of money on public employees is not a popular concept even with the revenue that North Dakota has coming.”