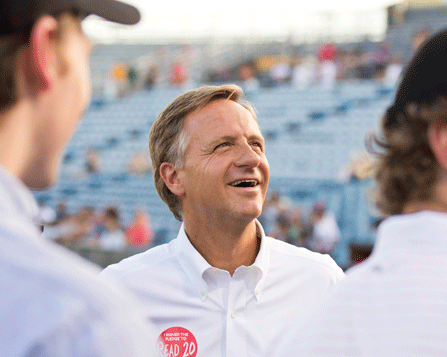 NASHVILLE—Governor Bill Haslam is completing an interview on a July morning and has only one more thing he wants to mention: the dramatic increase in the number of consultants working for the Tennessee Department of Transportation.

The problem, Haslam explains, is that the state instituted a hiring freeze and a salary freeze a few years ago. When engineers left, the state couldn't replace them. So it hired consultants, including some of the same engineers who had just left. “It ended up costing us two or three times as much,” Haslam tells Stateline. “Well, that's crazy. We think we can take, of that money, a good chunk of it and refurbish a bridge and build a new road.”

“This,” Haslam says, “is the kind of stuff that I get excited about.”

That alone makes him unusual among recently installed Republican governors. For most of the others in his GOP class of 2010, excitement has meant having Democratic opponents flee the state as a delaying tactic, showing up on vice presidential short lists and leading the national news. Wisconsin's Scott Walker, South Carolina's Nikki Haley, Florida's Rick Scott and Maine's Paul LePage, among others, quickly became national stars, symbols or pariahs — depending on one's perspective.

With very little notice outside Tennessee's borders, however, Haslam has had as much success enacting an ambitious agenda as any new governor over the last two years. One reason he has received little attention is that his priorities—government management, economic development and education, to the exclusion of almost everything else—reflect someone who gets excited about state budget line items, not national politics.

Haslam, 53 years old and a former mayor of Knoxville, has played down partisan conflict and steered the state away from culture war issues. So far, he's been rewarded for this approach in the Republican-controlled legislature and with the Tennessee public. His approval rating stands higher than 60 percent.

Still, there are warning signs for the future. Conservative activists in Haslam's own party have criticized him and the legislature for not doing enough to advance legislation on guns, sexual orientation and religion. They have condemned the governor for hiring a Muslim who worked as a fellow in the Obama White House and for allowing gays to work in the state's Department of Children's Services.

These voices may be a minority in the Republican Party, but they're not an inconsequential one. In last week's legislative primaries, challengers on the right defeated some key Tennessee House incumbents. That was a first step to what activists hope will be a more conservative legislature and one more willing to challenge the governor.

If that happens, Haslam's approach will be tested. State politics — in Tennessee and around the country — has become increasingly partisan, ideological and confrontational in recent years. Haslam seems intent on proving that a governor can defy all of those trends and still get big things done.

Despite the disagreements, there was plenty for a conservative Republican to be happy about during Haslam's first two years in office. With the governor in the lead, Tennessee approved restrictions on jury awards and enacted substantial tax cuts, eliminating the gift tax and phasing out the estate tax. The legislature overhauled decades-old civil service rules to give state managers more discretion to hire, fire and promote the workers they choose. Over the objections of Democrats and teachers unions, lawmakers made it harder for teachers to qualify for tenure and linked tenure to student evaluations. The two budgets the state has enacted each spent less money than the year before. Plus, though it wasn't his idea, Haslam signed a bill to limit teachers' collective bargaining powers.

Yet, in one way or another, almost all of these accomplishments reflect Haslam's preference for consensus. The tax cuts included a reduced sales tax on food, a key Democratic priority. The civil service changes were the result of a compromise between the governor and the Tennessee State Employees Association, which won a continued role for seniority in promotion and layoff decisions. Republican Senate Speaker Ron Ramsey advocated eliminating collective bargaining for teachers entirely, but the governor sided with the House to soften the bill. Over some conservative objections, Haslam's budgets have maintained funding for pre-K education — one of the key achievements of his Democratic predecessor, Phil Bredesen — and this year's budget also included a pay raise for state workers and money for a building boom on college campuses.

Meanwhile, Haslam's most prominent role on the national stage so far hasn't been as a Republican attack dog. It's been as a lead advocate for a key bipartisan priority of governors and state legislators: federal legislation to require online retailers to collect state sales taxes. Haslam has been an eager supporter of Mitt Romney in both the Republican primary and the general election, but he still praises the Obama administration for its work on charter schools and teacher evaluations.

All of this seems to reflect the background of someone for whom politics is still a relatively new vocation. His father, Jim, founded what started as a chain of gas stations and today is Pilot Flying J, the largest network of travel centers in North America. Haslam spent much of his adult life working in the family business.

His money and his connections from that experience served him well when he first ran for mayor in 2003 and when he was elected governor in 2010. When Bill's older brother Jimmy became the majority owner of the National Football League's Cleveland Browns last month, Forbes estimated the family's wealth at over $3 billion.

As Haslam himself volunteers, one reason he's been able to enact most of what he wanted is that Republicans have lopsided majorities in both chambers of the Legislature. Since the 2010 election, the G.O.P. has held the House, the Senate and the governorship in Tennessee for the first time since Reconstruction. At some moments, however, those majorities have also made Haslam's life more complicated. A very different agenda has bubbled up from the legislature, one heavily focused on social and cultural issues.

Just this year, lawmakers debated prominent legislation on guns: a bill to require employers to let their workers store firearms in their cars in company parking lots. On gays: a bill barring teachers from discussing homosexuality in elementary and middle schools. On religion: a bill designed to reverse private Vanderbilt University's “all-comers” policy, under which Christian student groups said they couldn't limit their membership to practitioners of their faith. On science: a bill protecting teachers who discuss weaknesses of scientific theories such as evolution in addition to their strengths. On sex: expanded abstinence-only education rules. And on immigration: a bill limiting the number of foreign workers at charter schools.

Haslam's approach to all this has been a mix of quiet opposition, acquiescence and avoidance. He signed the abstinence-only education bill. His interventions helped prevent the “don't say gay” sexual orientation bill and the guns in parking lots bill from ever reaching his desk. He allowed the foreign worker charter school bill and the evolution bill to become law without his signature. He issued his first veto on the “all-comers” bill and legislators didn't attempt to override it.

Through these debates, Haslam has reminded lawmakers—and the press, which has eaten the controversies up—not to lose sight of the bread-and-butter issues at the top of his agenda. Still, he doesn't condemn members of his own party. “While my job is to bring focus,” Haslam says, “it's not my job to say as a duly elected member of the legislature they can't bring up a proposal they really care about. It might be the reason they ran for office.”

This conciliatory approach hasn't satisfied all the governor's critics. Gun rights groups have ripped Haslam, and he's been formally condemned by a handful of county Republican parties.

John Harris, the executive director of the Tennessee Firearms Association, thinks the current debate reflects a deeper rift between top Republican elected officials in the state — not just Haslam but also U.S. senators Lamar Alexander and Bob Corker —and the party's grassroots. “They're not constitutionally based conservatives,” Harris says. “They're Republicans because they think that's the party that gets along best with big business.”

Still, Haslam has emerged from the controversies with his popularity in the party, the state and the legislature mostly unscathed. The proof of that is in what some of his critics are saying.

Glen Hughes, president of the Tennessee Republican Assembly, never had high hopes for the governor, who in Knoxville was a member of Michael Bloomberg's Mayors Against Illegal Guns (Before running for governor, Haslam quit the group and joined the NRA). Haslam, he says, has lived down to his expectations. But he also makes a prediction: Haslam will be reelected. The governor is too strong politically and the challenges of defeating an incumbent are just too great.

Instead, what Hughes and other activists propose is an indirect assault. They want to elect more allies to the legislature who will be willing to advance their causes over Haslam's objections. It's a strategy that, at least in theory, is particularly well-suited to Tennessee, where veto overrides take only a simple majority vote.

In last Thursday's primary, the hottest legislative race in the state was between House Caucus Chair Debra Maggart, whom firearms groups blamed for the demise of the guns-in-parking-lots bill, and a challenger from the right. Speaking before the primary, Hughes made another prediction: If Maggart loses, House Speaker Beth Harwell, a Haslam ally, will be out of her leadership role. “You're going to ring a loud bell,” Hughes says, “that the grassroots people in this state are fed up and they're sick of this stuff.”

On Thursday, Maggart lost in a landslide. House Education Chairman Richard Montgomery also lost to an opponent from the right.

Just how much the legislature really will change remains to be seen. Harwell laughs off the threat to her and to Haslam. She notes Maggart didn't even vote for her for speaker last time around. “There is a reason why Governor Haslam is popular,” Harwell says. “He is reflecting the will of the vast majority of Tennesseans. I think legislators want to align with someone that popular.”

What is clear is that Haslam will have to continue walking a fine line if he wants to appeal to his party's most fervent conservatives and its more moderate members while advancing his ambitious plans. The next topic the governor wants to tackle is higher education. He says the state needs to address the “iron triangle” of cost, quality and access. But it's a certainty that cultural issues will continue to intrude.

Haslam, true to form, downplays the differences. “Are there people within the party that come from all different perspectives? Sure,” he says. “But I don't think there's any sense that within the Tennessee Republican Party there's this great divide and this battle for the soul of the party. I don't think that.”