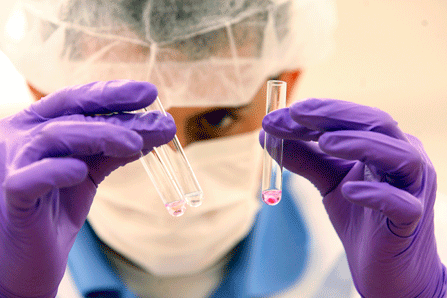 Alonzo Jay King, Jr. was arrested on Maryland's Eastern Shore in 2009 for first-degree felony assault and, as is standard practice in 25 states and the federal government, a sample of King's DNA was taken at the booking facility and sent to the state crime lab. After analyzing the sample and running it through the state's DNA database, police found that King's DNA matched crime scene evidence from a 2003 home invasion and gunpoint rape of a 53-year old woman. Based on the match, the state charged King with the rape, convicted him, and sentenced him to life in prison without the possibility of parole.

But King's conviction was overturned by the Maryland Court of Appeals, which agreed with King that his right to privacy as an arrestee was stronger than the state's need to collect this DNA. Now Maryland's Attorney General is asking the U.S. Supreme Court to issue the final word on the policy of collecting arrestee DNA.

In a brief opinion last week, Chief Justice John Roberts ordered that the state's DNA collection policy be kept in place for the time being while the Supreme Court considers whether it will hear Maryland's case later in the year. (A decision on arrestee DNA will not affect the practice of collecting DNA from convicted offenders, which is widely practiced and is not being challenged.)

“There is a reasonable probability this court will grant [a hearing],” Roberts wrote, because the Third and the Ninth circuit courts have upheld collecting arrestee DNA, while both Maryland and Minnesota's highest courts have ruled against the practice. The confusion among the lower courts, Roberts explained, muddles the legality of arrestee DNA collection, which he called “an important feature of day-to-day law enforcement practice in approximately half the states and the federal government.”

A final word from the Supreme Court will provide long-awaited guidance for states, which have greatly expanded DNA collection policies over the last 10 years. Police officers take arrestee samples using a cheek swab, and the samples are then processed and catalogued in a state database and sent to the national DNA database managed by the FBI.

For New Mexico residents Jayann and Dave Sepich, it was a DNA match that identified and convicted their daughter Katie's killer almost five years after her death in 2002. The Sepich family now advocates for arrestee DNA statutes across the country. “We learned the power DNA has,” says Jayann Sepich, “not just to solve crimes but to prevent crimes, and the trauma and the pain they bring.”

But many share the concerns of the Maryland Court of Appeals that collecting DNA from arrestees violates their Fourth Amendment right to be free from unreasonable search and seizure and deprives them of their presumption of innocence. The National Association of Criminal Defense Lawyers wrote in 2008 that collecting arrestee DNA “flouts the presumption of innocence, misallocates resources, and greatly expands the potential for discrimination.”

Beyond Fourth Amendment concerns, the overall effectiveness of collecting DNA from arrestees has come into question. In the King case, defense attorneys pointed out that of the 10,666 samples that the state of Maryland took in 2011, only 19 led to an arrest, and only nine of those arrested were actually convicted.

“A program of warrantless collection and search of DNA,” King's lawyers wrote in their filing before Chief Justice Roberts, “where 99.82% of the persons subjected to mandatory collection of their genetic blueprint are not arrested as a result of the search represents a substantial public interest in upholding Fourth Amendment protections that greatly outweighs the State's claim of harm.”

Also controversial are the lack of uniform policies for what happens to a sample if an arrestee is not ultimately charged or convicted, explains Sara Katsanis, a researcher at Duke University's Institute for Genome Sciences and Policy. “Most states have not offered automatic mandatory expungement of DNA samples,” Katsanis says, but rather put the onus on the people arrested to have their DNA removed from the databases. As of September 2011, only eight states provided automatic expungement of a DNA sample if the arrestee was not convicted. The other 17 states and the federal government provided DNA expungement only upon request.

Additionally, Katsanis says, as the number of arrestee samples has increased, the increased volume of work for crime labs means that processing other crime scene evidence often gets put on the back burner. As Stateline has previously reported, increased demand for DNA samples from both arrestees and convicted offenders have exacerbated DNA backlogs, often leaving other crime scene evidence untouched. If the Supreme Court rules that taking DNA from arrestees is constitutional, more states will undoubtedly create arrestee DNA statutes, taxing crime labs further.

One state that relies heavily on arrestee DNA is Colorado. There, Denver District Attorney Mitchell Morrissey asserts, processing arrestee samples goes quickly and helps greatly to solve violent crimes. “The majority of crimes that DNA helps us solve are against women and children,” says Morrissey, who has been a pioneer in prosecuting cases using DNA evidence, “and the sooner you get (the offender's) DNA in the system, the sooner you're able to get the criminals off the streets.”

In a study conducted by Morrissey's office, five criminals active in the 1990s were found to have committed 52 violent crimes, including three murders and 19 sexual assaults, all of which, Morrissey claims, could have been prevented if the state had had an arrestee DNA statute during that time.

Whether or not the Supreme Court grants a hearing in Maryland's case, DNA will continue to be a fixture in modern criminal justice. Some law enforcement agencies are hoping to make it the primary form of identification in investigations, rather than relying on names, fingerprints or appearance, which can all be altered over time. “People change names,” says Morrissey, “fingerprints are smeared, people look different, but your DNA can't change.”