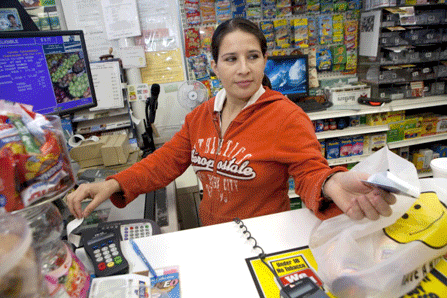 Inaction on Capitol Hill has been blamed recently for everything from near-shutdowns of the federal government to a historic downgrade in the U.S. credit rating.

But this week, congressional stalemate over a sweeping farm bill has set back the clock on impending budget cuts that had worried states and safety net advocates around the country.

With Congress' August recess set to begin and little sign of a breakthrough on the farm bill in the near future, it's increasingly likely that deep spending reductions contained in the measure will be put off for at least six months, and maybe even a year.

Among the programs covered under farm legislation is the Supplemental Nutrition Assistance Program, commonly referred to as SNAP, or food stamps. Both the House and Senate were poised to deliver deep cuts to the program: The Senate, which passed a farm bill in rare bipartisan fashion earlier this summer, sought to deliver about $4.5 billion in cuts to food stamps. The House version of the bill is much more draconian. It looks to cut more than $16 billion.

Either version would eliminate benefits for millions of people, and the prospect has prompted wide-ranging complaints. AARP has railed against the cuts; the National Conference of State Legislatures (NCSL) has looked to blunt their impact.

But despite Senate passage, the House version has yet to be taken up. The main reason is division among Republicans, many of whom believe the Senate's food stamp reductions aren't deep enough. Earlier this year, Republicans proposed more than $33 billion in food stamp cuts before the House Agriculture Committee cut that number in half. “That's one of the core issues posing a challenge,” says Dale Moore, of the American Farm Bureau Federation.

Given the impasse, Congress is now considering either a one-year extension of the current five-year-old farm bill or a resolution that would keep the entire government funded at existing levels through March of 2013. Either scenario would leave food stamps unscathed for the time being, although neither would tamp down conservative zeal for major reductions in the long term.

“It's a little bit early to be excited,” says Helly Lee, a senior policy analyst at the Center for Law and Social Policy. “Things are very much up in the air… For us, the position is to preserve SNAP as much as we can.”

Safety net advocates are looking to turn Congress' delay to their advantage, making a public case that deep food stamp cuts would pose new problems for the nation's nutrition and health. In May, the latest month for which data is available, more than 46 million people were enrolled in SNAP, up from 28 million just four years ago. “There will continue to be pressures to cut the programs,” says Sophie Milam, director of nutrition assistance at Feeding America, “but the need for these programs will continue to be at these historic levels.”

Beyond the safety net aspect, state lawmakers will increase the pressure for other reasons. That's because the two versions of the farm bill don't just cut funding, but have broader implications for states' management of their programs.

“We don't like to see policies put in place at the federal level that dictate too much to state government,” says South Dakota State Senator Tom Hansen, who co-chairs NCSL's Human Services and Welfare Committee, “whether it be removing the ability to make decisions or to run the program the way the state government feels it should be run.”

Both the House and Senate measures, for example, would block a strategy states use to enroll people in SNAP through their participation in energy assistance programs. Critics argue that this practice gives food stamp benefits to recipients who otherwise wouldn't qualify for them. State officials generally say it just streamlines enrollment and gets benefits to those in need.

The House bill would also eliminate so called “categorical eligibility,” a practice used by most states. Under the practice, the eligibility requirements for food stamps are aligned with those for state welfare programs, eliminating the need for two sets of standards. The change comprises $11.5 billion of the proposed spending reduction in the House bill, according to the Center on Budget and Policy Priorities. The House would also eliminate a $480 million incentive program for states to reduce error rates and overpayments.

Taken together, the changes would mean less state flexibility and greater costs. Already, Hansen says, states are stressed by increasing demand. The 2009 federal stimulus bill offered support, but those funds have run out at the same time many states are paring back their own budgets.

The specifics will remain a subject of debate through August and into September. It's still possible Congress could come together on a sweeping farm bill agreement — complete with food stamp cuts — before the current measure expires September 30. Food stamps could also figure into budget negotiations as Congress considers broader spending reductions slated for year's end.

But because influential constituencies are pulling in both directions, with some looking to slash further, and others the opposite, a broad deal seems increasingly unlikely. Faced with the specter of deeper cuts if Congress does act, safety net advocates are finding that a stalemate doesn't look so bad. “As good as we can hope to get,” Hansen says, “is that extension with the current bill.”