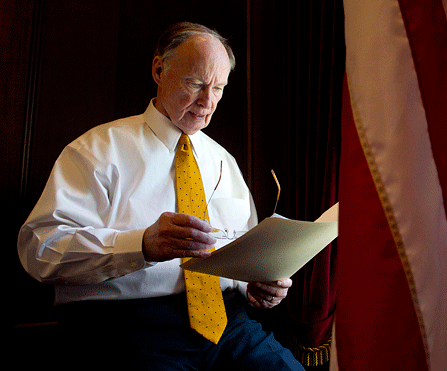 That is the doomsday scenario being sketched by officials at the highest levels of Alabama government. Whether it will come to pass, they say, could depend on what the voters decide September 18.

That day, the state will vote on a constitutional amendment that would transfer nearly $200 million for the 2013 fiscal year and hundreds of millions of dollars more in the following two years to the state's troubled general fund from a trust fund supported by offshore oil and gas revenue. The budget that the legislature approved this spring counts on voters saying yes.

Otherwise, the agencies that the general fund supports — Medicaid and Corrections are by far the biggest — will face double digit spending reductions on top of the cuts they already have sustained. Fearing that outcome, Governor Robert Bentley and other state leaders have dramatized the dire consequences of a no vote.

Others don't believe the results would be that bad. They say the state can maintain services without tapping into the trust fund, which is intended as a savings account for the state.

For the next six weeks, Alabama will be consumed with the question of how dire the situation really will be if the amendment is defeated. Over the long term, though, the bigger question may be whether funds will be adequate even if the amendment passes.

Supporters hope that a three-year infusion of cash will buy the state time to put the general fund on a sustainable path. Many of the factors that got Alabama to this point, however — the state's poverty, its dependence on federal support, its resistance to revenue-raising measures, its declining oil and gas revenue, and its unusual bifurcated budget — won't be overcome easily.

Many of those challenges aren't unique to Alabama, but the state's particular problem this year has a lot to do with the way the budget is structured. Despite the economy's continuing sluggishness, many other states' budget difficulties are subsiding. The improvement is due to recoveries in the two main taxes that fund state government: the sales tax and the income tax. In Alabama, those taxes are recovering too, but they're not doing the general fund any good.

The reason is that in Alabama, the “general fund” isn't really general at all. Instead, education has a separate fund with separate funding sources, including sales and income taxes. The general fund, which pays for most of state government other than education and transportation, gets its money from a hodgepodge of levies, including taxes on insurance premiums, cell phones and tobacco. Even in an economic recovery, it's not as though Alabamians run out en masse to buy insurance plans or cigarettes.

Without revenue growth and without the crutch of federal stimulus money, Alabama legislators contemplated spending as little as $1.3 billion in state dollars for the general fund for the 2013 fiscal year. That would have been the smallest amount since 2004. “We're seeing now what a real budget looks like for the state of Alabama,” says Jeremy King, a spokesman for Bentley, “and it's not really pretty.”

With its two rainy day funds already tapped for every dime they had earlier in the downturn, the state turned to the oil and gas trust fund. Alabama established the fund in 1982 as a permanent endowment. Each year, earnings from the trust fund provide tens of millions of dollars for the general fund. But that's interest. The upcoming vote is about withdrawing principal.

For that reason, opponents of the transfer argue that the move will make the general fund's situation worse in the long-term, especially because the state's oil and gas revenues are less than half what they were in the mid-2000s, with no recovery expected. “As with any other savings account where you're relying on the income,” says Bradley Byrne, whom Bentley upset in the 2010 Republican primary for governor, “if you reduce the principal, it's going to reduce the income.”

As a result, Alabama is considering a question just about every state has had to weigh since the recession began: When is short-term budget relief worth long-term risk? To many supporters the question isn't a close call. The state has $2.3 billion in the Alabama Trust Fund. When it's sitting on that kind of money, they ask why the state would make draconian cuts instead.

Even if the amendment passes, the Department of Corrections' state funding will fall by $16 million next year. And if the amendment fails? “You'd talk about potentially closing several major facilities, the majority of our work-release programs, releasing 9,000 inmates,” says Kim Thomas, Alabama's corrections commissioner. “You'd have to sever employment for 1,100 officers.”

Likewise, Alabama already has one of the least generous Medicaid programs in the country, one that's heavily dependent on the federal government. That combination makes it very difficult for the state to cut deeply without cascading consequences and without falling out of compliance with state and federal law, says Donald Williamson, Alabama's state health officer.

The state could cut prescription drug benefits, Williamson says, but that would drive patients to seek more costly care in hospitals. It could cut reimbursement rates to providers, but doctors might leave the state and hospitals and nursing homes might close. Nearly 70 percent of Alabama's nursing home patients are on Medicaid. Every dollar the state cuts from Medicaid will cost it roughly two dollars in federal funds. “I think it very quickly becomes a house of cards that would on the funding side come crashing down,” Williamson says. “You'll just begin to see the system of care slowly but surely unravel.”

Whenever officials in any state start talking about these sorts of dire consequences, skeptics wonder whether they're bluffing — or exaggerating — to get the policy outcome they want. Byrne, a former state senator, argues that Alabama's leaders aren't thinking creatively enough. For example, he says, the state could save money on Medicaid by utilizing managed care and by encouraging patients to use urgent clinics instead of costlier emergency rooms. Williamson says the state is contemplating managed care, but that it's hard to make the math work because cuts in state spending mean cuts in federal support too.

If the amendment fails, lawmakers could rush back into a special session before the October 1 start of the fiscal year, but it's not clear that there's any politically viable alternative to drastic spending cuts. While some Democratic lawmakers have promoted higher cigarette taxes, the Republican-controlled legislature is disinclined to go in that direction.

Lawmakers know that the biggest political disappointments of Bentley's two predecessors — Don Siegelman's failed vote to create a lottery in 1999 and Bob Riley's failed tax increase in 2003 — involved asking Alabama's conservative voters for more revenue. Those votes are also reasons to doubt whether the amendment will pass: When governors say to vote yes, Alabamians have a long history of voting no.

But there also reasons to believe the amendment could pass, among them the forceful support of Alabama's hospital and nursing home associations. If that happens, the question then will be whether the same doomsday scenarios will be back in three years, once the short-term transfers end.

Gubernatorial spokesman King insists this isn't a temporary fix. The state has already taken steps to curtail long-term spending, he says, such as reducing public employee pension benefits and cutting the size of the state workforce.  Plus, King notes, lawmakers decided this year to dedicate revenue sources with more growth potential to the general fund.

But not all of that revenue is a sure thing. The state is committing three-quarters of online sales tax revenue to the general fund, but is counting on congressional action requiring the collection of that money. What's more, the legislature didn't agree to a bigger structural change that Bentley proposed this year: combining the education trust fund and the general fund. While a combined general fund would give the state more flexibility when particular revenue sources fall short, legislators — probably correctly — saw it as a threat to the education budget, given the general fund's current problems.

Arthur Orr, chairman of the state Senate's Finance and Taxation Committee for the General Fund, says he's not counting on revenue from online sales taxes. Nor does he expect support for higher taxes to materialize suddenly in the legislature. He doesn't think a consolidated general fund will pass until after the current budget situation is stabilized.

Instead, Orr thinks the state will need to comprehensively reevaluate what it does and how it does it. Alabama could privatize its liquor stores, sell off golf courses it owns, centralize information technology functions and consolidate agencies — more than a dozen agencies, he notes, have officers with a badge and a gun. “At the end of the three-year period the goal is to have our revenues matching our expenditures,” Orr says. “The cliff was too high to jump from and survive, so we'll stairstep it down if the people approve this constitutional amendment and we'll have a softer landing.”