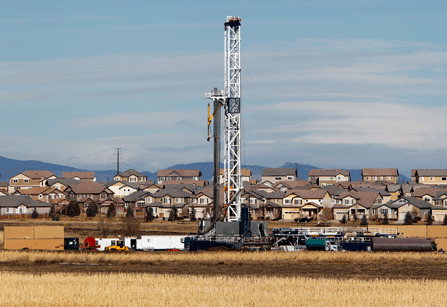 An oil drilling rig is set up on the outskirts of a neighborhood in Frederick, Colorado. No longer confined to remote lands, oil and gas companies are increasingly entering populated areas. In nearby Longmont, the city council has tried to ban drilling near residences.(AP)

Dennis Coombs doesn't oppose the oil and gas development spreading throughout Colorado. After all, he says, “I like to be warm in the winter.”

It's just that Coombs, mayor of Longmont, Colorado, would like to keep drilling — or other major industrial activities, for that matter — a healthy distance from where most of the 80,000 plus residents of his city live and work.

“We wouldn't want a heavy-duty industrial dairy farm in the middle of a heavily residential area,” he says. “We just want our citizens to be protected.”

Developers, however, would like to take advantage of the resources underneath Longmont, which sits atop the lucrative Niobrara oil and gas fields stretching across parts of Colorado, Nebraska and Wyoming. And state law allows them to drill as close as 350 feet from homes, schools or hospitals in developed areas.

A recent study by Western Resource Advocates, a Colorado-based environmental group, found that in three Northern Colorado counties, 26 schools lie within 1,000 feet of an active or proposed drilling site. In Longmont's case, one middle school fit that description.

Two weeks ago, the Longmont City Council passed a slate of drilling regulations, including blocking it in residential areas. The move didn't fully satisfy residents seeking an all-out ban, a proposal that will likely be put to a vote in November. Those residents say that relegating drilling to industrial zones won't prevent possible air or water pollution from effecting residents, since such resources don't conform to zoning laws.

“It's a lame ordinance,” says Michael Bellmont, a local insurance professional and member of the grassroots group petitioning for a drilling ban. “But they did the best it could, considering the circumstances.”

The council's decision rankled state officials, and last Tuesday (July 24), the Colorado Oil and Gas Conservation Commission, whose mission is to foster responsible oil and gas development in the state, told Longmont officials to prepare for a lawsuit challenging their authority to regulate the industry. It's uncharted territory for the agency, which is occasionally involved in suits, but not as the plaintiff.

In another scuffle over drilling some 1,600 miles to the east, officials in seven Pennsylvania towns in the Marcellus Shale region heard news two days later that their move to zone out drilling had survived legal scrutiny. The Pennsylvania Commonwealth Court, in a 4-3 decision, struck down a provision in Act 13, key legislation on hydraulic fracturing passed this year, which says energy companies can drill most anywhere, regardless of local ordinances.

The majority ruled that the legislation “violates substantive due process because it does not protect the interests of neighboring property owners from harm, alters the character of neighborhoods and makes irrational classifications.”

Judge Dan Pellegrini wrote for the majority: “It would allow the proverbial “pig in the parlor instead of the barnyard.””

Longmont and the Pennsylvania towns are among a growing number of local governments challenging state control over drilling. As oil and gas development spreads into residential areas, people who are unhappy with what they view as lax state regulations are increasingly turning to their city councils for solutions. The trend is worrying industry representatives and state regulators, who are seeking to broaden the industry's reach.

At least 246 municipalities in 15 states have passed laws restricting oil and gas development on local land, according to tracking by Food and Water Watch, a Washington, D.C.-based environmental advocacy group.

Some of the ordinances are merely symbolic, passed by towns that don't sit on oil and gas supplies. But advocates for stronger local rule view the measures as self-defense against state regulations too generous to energy producers.

In Colorado, Longmont was joined by Boulder, Colorado Springs, Erie and Loveland in efforts to regulate drilling. In Pennsylvania, 14 municipalities have passed their own regulations.

New York, where Governor Andrew Cuomo is considering lifting a moratorium on hydraulic fracturing, has seen the greatest local movement against the practice. More than 90 municipalities there have passed resolutions addressing it. Planning experts say that compared to constitutions in other states, New York's constitution contains some of the strongest provisions for local government home rule.

Most at issue is horizontal hydraulic fracturing — or fracking — the controversial method of oil and natural gas extraction that has dramatically boosted U.S. energy supplies while concerning health and environmental circles. The relatively new technique involves the high-pressure injection of millions of gallons of chemical-laced water deep underground to break apart rock and free the resources locked within.

Environmental groups say fracking leaves local water supplies vulnerable to contamination — a claim disputed by energy industry representatives, who insist the process is safe and hasn't been directly linked to the pollution of drinking water.

That controversy has sparked many studies of fracking's impact on state economies, air and water quality and public health. But those studies, many of which are narrowly focused or agenda-driven, combine to paint a confusing picture of the issue.

Coombs admits that's a problem. ”The real truth is probably somewhere in the middle – that there are some particularly good oil and natural gas drillers,” he says. But municipalities should be able to decide for themselves, he adds.

Other concerns are that drilling will drive down property values and that the surge of traffic that oil and gas development brings — including heavy machinery — will wear down roads and other infrastructure.

In Longmont, where the city owns few mineral rights, “We're not going to get a ton of money out of it, but we'll just be stuck with the bill,” says the mayor, who worries that the “impact fees” collected from drillers — the 50 percent of state severance taxes that go to local governments — may not cover the costs.

In Pennsylvania, the municipalities suing the state house nearly 150 fracked shale wells. They argue that Act 13 prevents them from protecting public natural resources and the health and safety of citizens, which are constitutional obligations. Those are the broadest of their objections.

State regulators and industry advocates say local pushback against drilling is misguided and a dangerous obstacle to economic growth.

“[Longmont] has taken a position we think jeopardizes efficient and orderly development of a resource all citizens depend upon,” Mike King, director of the Colorado Department of Natural Resources, said in a statement. “…We are concerned about a tangled patchwork of rules from jurisdiction to jurisdiction that create inconsistency, uncertainty and undermine the responsible development of our important oil and gas resources – resources we all consume.”

Advocates say that drillers merit exemptions to local zoning laws because energy extraction is dependent on where the resources lie, and sometimes that includes residential areas. Other industries are less dependent upon geography.

That's why Pennsylvania grants local zoning exemptions to timber companies, and why Michigan, as  Stateline has reported , recently did the same for mineral miners.

In Ohio, a law passed in 2004 exempted drillers from local zoning rules. This year, the Idaho Legislature passed a similar measure.

Following the Pennsylvania ruling, Kathryn Klaber, president of the Marcellus Shale Coalition, said in a statement that “lack of uniformity has long been an Achilles' heel for Pennsylvania and must be resolved if the Commonwealth is to remain a leader in responsible American natural gas development.”

“We're not saying that local governments shouldn't be at the table, and be heard,” says Travis Windle, a spokesperson for the coalition, who points out that Pennsylvania's law gives local governments some regulatory leeway over drilling, but not the authority to zone it out.

This weekend, Governor Tom Corbett announced that Pennsylvania would appeal the court's ruling, saying that “the provisions struck down by the Commonwealth Court are critically important for job creators who are employing more than 240,000 Pennsylvanians.”

Legal fights over local drilling regulations haven't been limited to Colorado and Pennsylvania. Last August, a West Virginia court ruled in favor of an energy company that challenged the Morgantown's ban on hydraulic fracturing, which conflicted with state law. And last February in New York, state courts upheld drilling bans in the small towns of Dryden and Middlefield after challenges by industry.

Longmont's mayor and some other advocates for increased local rule are encouraged by the Pennsylvania and New York rulings. But that's not the case for Ben Price, projects director for the Community Environmental Legal Defense Fund, a group that advocates for local government.

He says the Pennsylvania court ruling was narrow and “not very impressive,” because it supported just a fraction of the town's broad concerns without affirming the municipalities' constitutional duty to protect the well-being of its citizens.

“We don't have a fracking problem; we have a democracy problem,” Price says. “If communities were actually able to protect their land….we wouldn't have a lot of these environmental problems.”