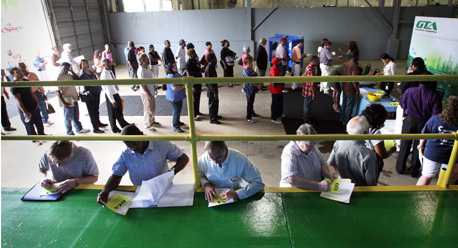 States are still paying off federal loans they needed to issue unemployment checks during the recession. Here, job seekers attend a career fair in Mississippi. (AP)

States are slowly paying off the billions of dollars they borrowed to keep their unemployment trust funds afloat during the recession, but those debts are challenging a system created more than 75 years ago and could be hampering some states' economic recovery.

Of the 34 states that borrowed to keep paying  unemployment insurance (UI) during the recession, 22 still owe more than $30 billion to the federal government, a debt that will take years for states to pay off.

The Urban Institute's Wayne Vroman, who has studied the unemployment insurance system, has said that the latest recession and its aftermath “pose the most serious challenge to UI financing since the state programs were founded in the mid-1930s.”

With the national unemployment rate stuck just above 8 percent, experts fear that the loans are thwarting job growth and recovery. The reason is primarily two-fold. First, businesses in some 20 states that still owe the federal government face higher tax rates to make up the difference, which could prevent some employers from hiring.

Secondly, the money that a state could use to beef up the safety net, fix roads or jumpstart local economies is instead being spent on paying interest charges for the loans to shore up their unemployment insurance systems.

Unemployment benefits for the program, run jointly by the federal government and the states, are distributed by states from a special fund. That fund gets its money largely from employers, who pay a state and federal payroll tax specifically for this program.

During the recession, most states' trust funds went broke, so they turned to the federal government for loans. The federal stimulus program gave states breathing room by extending the interest-free unemployment insurance loans, but only through the end of 2010.

As Stateline has reported, employers in some 20 states are shelling out more in taxes as a penalty for the states not paying back those federal loans in time. The higher taxes kicked in regardless of whether state lawmakers passed tax increases. That's because the federal law governing unemployment loans to states has an automatic repayment process for those that fail to pay back their loans within a certain time.

While some states also raised taxes on employers to help shore up their unemployment insurance, others also cut benefits, either by reducing the amount paid or the length of time that the jobless receive benefits.

Until the most recent recession, states typically provided up to 26 weeks of benefits; now, at least seven states provide less than that. Florida, for example, became the only state in the country that links the amount of time people can collect benefits to the state's unemployment rate. As the jobless rate falls, so does the duration of benefits.

Opponents to the cuts, however, say that reducing benefits likewise dampens recovery and runs counter to what the UI program is designed to do: put money in the local economy when unemployment is high by replacing wages to the unemployed.

“Cuts in benefits and eligibility reduce consumers' buying power,” says Steve Herzenberg, economist and executive director of the Keystone Research Center in Harrisburg. He says the state cuts, on top of losing extended benefits paid by the federal government, helped “put Pennsylvania back in neutral,” economically. He said he would have preferred Pennsylvania rely more on increasing business taxes and less on reducing benefits for the unemployed.

Pennsylvania also is getting some attention for the way it plans to pay off its loans to the federal government. It's the latest state to decide to sell bonds to raise money to pay off its loan needed when the state's unemployment trust fund went dry, joining Idaho, Michigan and Texas that likewise issued private-market debt.

These states figure they will get an interest rate lower than the 4 percent on the federal government loan paybacks, saving the state and businesses millions of dollars. Pennsylvania Governor Tom Corbett said the recent package of unemployment insurance changes “protects our workers while taking away a burden that has slowed job growth and investment.”

Critics say borrowing in the private market doesn't change the fact that the states still have to pay it back.

This kind of arrangement “is equal to paying off your credit card's high interest loan by drawing against your home equity line,” Michael Cullen, managing director of On Point Technology and a former director of Colorado's unemployment insurance program, told a congressional panel earlier this year.

Using bonds in this way is a relatively new phenomenon. Before the recent recession, only six states issued debt in the 75-year history of the UI program, says Mike Evangelist, a policy analyst with the National Employment Law Project, an advocacy group. West Virginia and Louisiana were the first states to issue bonds in the private capital market in 1987, he says.

Reserves could have prevented borrowing

One of the reasons states had to borrow during this recession is that they didn't have much in their reserves.  Paying off the loans—either to the federal government or to private securities market — could make it harder for states to build up reserves for a next recession.

Evangelist of NELP says that by one measure, only seven states went into the recession with enough money to pay benefits for one year.  In a new report, he figures states would have to accumulate an astounding $120 billion of reserves to pay back their loans and reach the solvency benchmark by 2016. The amount that employers would have to chip in for states to build up their reserves within the next five years would have to increase by well over 50 percent from 2010 levels, which is politically unrealistic.

Experts say changes are needed to break the long-term trend of not saving in good times and going bust in bad times, but those changes aren't occurring in many statehouses or coming from the federal government.

President Obama has pitched suspending for another two years the interest states owe for UI loans and delaying the penalty for not paying back loans, but the proposal has gone nowhere in Congress.

Henchman of the Tax Foundation says that Congress doesn't “seem to be in a rush to stop the rising state UI taxes on employers, even though it's hitting right at a time of too slow job growth.”

Meanwhile at the state level, Pennsylvania is trying something new. The state is one of the few that also collect unemployment compensation contributions from workers, not just employees. As part of its recent UI  package, the state will use 5 percent of employee taxes  to establish a” Re-employment Fund” to help jobless Pennsylvanians get training to return to work.

Herzenberg of the Keystone Research Center calls the new fund “a tiny step forward” to help update a system that  was created for a 1930s manufacturing economy in which unemployed workers expected to go back to a manufacturing job. Many of today's unemployed can't go back to their old jobs and need training to get new ones.

“We need a trampoline, not a safety net,” and such a training fund moves the unemployment insurance system that direction, he says.