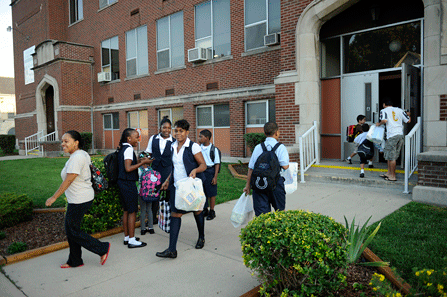 Students at Cincinnati's lowest-performing schools can use the state's EdChoice scholarship, worth up to $5,000, to attend any one of 53 private schools in the city.

Those 53 schools represent just over half of all the private schools in Cincinnati, but many of the city's top academic schools aren't on the list.

That isn't uncommon. In fact, Cincinnati students who receive the EdChoice scholarship have more options than students in other Ohio cities. Statewide, fewer than half of all private schools participate in EdChoice or the similar Cleveland Scholarship program, according to data from Ohio's Department of Education.

But a Stateline analysis found that many private schools choose not to participate in these “school choice” programs. Many are wary of government regulations, especially standardized test requirements. Others are concerned about the possible impact on their educational mission, among other things. “You want the elite schools to participate,” says Chester Finn, president of the Thomas B. Fordham Institute, an education-focused think tank which supports voucher programs and is working on a study looking at what factors affect private school participation. “To have a door slammed because the program's requirements are too onerous isn't in anybody's interest.”

For Elder High School, an all-male Catholic high school in Cincinnati that doesn't accept EdChoice students, it's a question of academic preparedness.

“The transition from the public schools in Cincinnati to a school like Elder High School is difficult to begin with,” says Principal Tom Otten. “These are students that are coming from what are labeled academically deficient schools, so they're going to struggle even worse than the ordinary student.”

Other Ohio private schools balk at the requirement that they administer state tests to participate.

“Most of our member schools, if not all of them, have strong feelings about the value of (Ohio's Achievement Assessments),” says Dan Dodd, executive director of Ohio's Association of Independent Schools, which represents many of the highest achieving private schools in Cincinnati and across the state. “We feel that there are much better ways to track accountability.”

“I don't know how to turn them over,” Murray says of the school's top private schools. “Higher quality choice is the absolute dream.”

In Louisiana, the participation rate is even lower: Only a third of private schools are participating in the state's new Louisiana Scholarship program.

In some states, such as Arizona, the participation rate is difficult to track. Scholarship organizations file annual reports with Arizona's Department of Revenue – the most recent one showed that students used individual or corporate tax credit scholarships at 353 schools – but the state's education department doesn't keep count of how many private schools are actually in the state. The most recent federal report on Arizona private schools, from the 2009-2010 school year, listed only 343 private schools, fewer than the number that accepted scholarships last year.

Similarly, Pennsylvania doesn't track how many schools enrolled students with scholarships funded by the state's Educational Improvement Tax Credit. The Department of Community and Economic Development, which administers the credit, doesn't ask scholarship organizations to report where their scholarships were used.

Advocates of these programs say that accountability is important, even if it means some private schools don't participate.

“More accountability is always a good thing,” says Malcom Glenn, spokesman for the American Federation for Children. “Accountability is what allows us to know that these programs are working.”

That's also the opinion of Damon Asbury, director of legislative services for the Ohio School Boards Association, which sees voucher and scholarship tax credit programs as a drain on public school financing. “If somebody wants to have the benefits of public support, they should be willing to accept the accountability,” Asbury says.

Earlier this week, Louisiana unveiled its accountability plan, which lays out enrollment and administrative criteria, along with a requirement that all students take the state's Louisiana Educational Assessment Program exams that are offered in fourth and eighth grade. Schools with heavy scholarship enrollment must publicly release the results.

But Bobby Welch, headmaster of the Dunham School in Baton Rouge, hopes that the four students his school is accepting into kindergarten this year never have to take that test. Welch supports the idea of accountability, but he thinks the exam his school already administers is better than the state test.

“We're not willing to drop our standards in order to qualify to participate in these programs,” he says.

Welch's school is the one Louisiana member of the National Association of Independent Schools, which represents some of the top private schools in the country, to accept students from the program, but that has as much to with admissions procedures as concerns about state testing, Welch says.

Currently, the Louisiana program doesn't allow schools to screen scholarship candidates before they're tested, which White has acknowledged presents a major hurdle for many private schools. Welch, executive director of Louisiana's Association of Independent Schools, says he thinks top private schools might be more inclined to participate in the program if they were treated more like public magnet schools, which screen candidates before admitting them.

“If they want us and schools like Dunham to participate,” he says, “then our state is going to have to accept us as we are.”