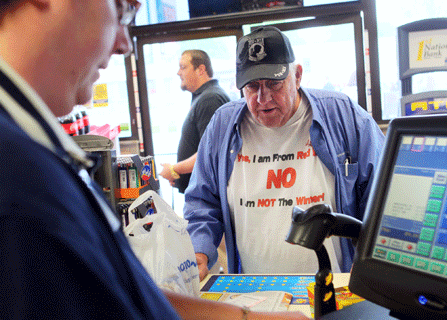 A customer plays the Illinois Lottery at a MotoMart that sold one of three tickets worth a combined $656 million in April of 2012. (AP)

Early this year, the Illinois Lottery trotted out a new commercial: A giant red ball rolled through the streets of Chicago, into small towns and then through the farmlands of downstate, while a sonorous voiceover intoned, “No one has small dreams, especially in Illinois. And this year, we'll have more winners, and more millionaires, across our beautiful state… The new, bigger, better Powerball.”

This is the revamped edition of the Illinois Lottery, under new management, promoted by new ad agencies, and, its managers hope, able to draw a new and much bigger stream of revenue. Last year, Illinois became the first state in the nation to semi-privatize its lottery operations, contracting with a management consortium, Northstar Lottery, to run things on a day-to-day basis. The state is hoping that this experiment will help it win the fiscal jackpot.

“What Illinois has done is a first for the U.S. lottery market,” says James Kilsby of GamblingCompliance, an online research service that tracks the gaming industry.

So far, things look relatively good. This week, the Illinois Lottery released its sales figures for fiscal year 2012: According to the lottery, its sales topped $2.67 billion and transferred a record $708.6 million to K-12 public schools, the capital projects fund for roads and bridges, and targeted causes such as breast cancer research and Illinois veterans' assistance.

This unaudited figure reflects a 17.9 percent sales increase from fiscal year 2011, according to the lottery, with a 27 percent rise in sales of instant tickets, to $1.62 billion. It's below the target that Northstar set when it took over in 2011, but Illinois officials seem satisfied.

Other states are looking on with interest. Faced with a persistently rocky economy, and budgets straining at the seams, a number of them may soon follow the Illinois example. Partial privatization of lottery services is attractive to states looking to quickly develop new games, leverage technology — and shift the risks to the private sector. “This is a way that lotteries are looking at boosting sales,” says Kilsby, “without having to expend state resources.”

“If you look at the amount of dollars that are returned to the various programs funded by Illinois, you have to say it's a resounding success,” says Rebecca Hargrove, president and CEO of the Tennessee Education Lottery Corporation.

Overall, lottery sales across the nation are growing. But so too are the states' demands for more revenue. The growth in revenues generated by lottery receipts is increasing at a much slower pace than state spending, says Lucy Dadayan of the Rockefeller School of Government. In recent years, lotteries have not been a reliable and sustainable source of revenue for funding K-12 education or other services. “Lotteries are not recession proof,” Dadayan says.

The Illinois Lottery managers became convinced that the way to remedy this was to start all over again with new products and in search of a different clientele. “If you're really hoping to create something new,” says Illinois Lottery Superintendent Michael Jones, “your interest is in… attracting a new group of people. That alchemy of creating games people want to play, with prizes people want to win, with advertising creating brands people want to participate in, that alchemy hasn't existed in a long time.''

What Illinois has created is known technically as an “integrative services contract.” The state continues to own the enterprise but contracts out day-to-day management. Pennsylvania, New Jersey, Michigan, Arizona, Ohio and Oklahoma have all explored going the semi-privatization route.

Pennsylvania is perhaps furthest along in the process. It has already set up a procurement process and requested qualifications from potential bidders. An undisclosed number of bidders was certified in May.

Several states, including Tennessee, Texas, Kentucky and Georgia, have turned their state lotteries into corporations. These corporate state lotteries are still subject to open records and open meetings, according to Tennessee's Hargrove, who once ran the Illinois State Lottery. “It's a states' rights issue,” Hargrove says, “and every state will take a different approach.”

None of the states are looking to fully privatize lottery operations because they are legally barred from doing so. A 2008 ruling from the Department of Justice prohibits states from turning their entire lottery program over to a private company.

One state, Indiana, actually did launch an early effort at full privatization.  In 2007, Indiana Governor Mitch Daniels tried to make a deal with a private gaming company that would have granted the state an upfront payment of $1 billion, according to gambling law expert Joseph Kelly, of the State University at Buffalo in New York. When the Justice Department ruling came down, Daniels dropped plans to privatize.

Illinois' partial privatization plan has cleared Justice, opening the door for similar experiments. But Kelly says that states should tread carefully with privatization.

“Here's the big problem I see,” Kelly says. “Are we only interested in maximizing profits? With the [state-run] system, you have a lot of procedures to protect the vulnerable and minimize people's vulnerability to greed. You'd be able to stop any kind of lottery ad... You have to have strict state supervision.”

Under Illinois' 10-year-agreement with Northstar, the state retains full ownership of lottery assets and control over all aspects of the operation, including approval of annual business plans. Northstar, meanwhile, is responsible for sales, marketing and game development, technology and the procurement of supporting services. “The state is making sure we have the right team in place to maximize revenue and hit its goals in an ethical, socially responsible manner,” lottery superintendent Jones says.

Northstar earns yearly management fees to cover overhead and supplier costs. It also gets an annual compensation incentive of up to 5 percent of the net income earned by the state and must make shortfall payments of up to 5 percent if it fails to meet projected guarantees it made to the state. For the 2012 fiscal year, it appears to be short of its target.

Despite this shortfall, Illinois officials see the climbing numbers as evidence that their scheme is going to succeed. “This is a work in progress,” Jones says. “They missed their targets. Can they make their targets? I think we can have confidence that they can.”