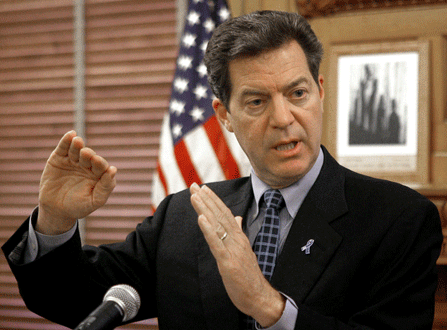 Kansas Governor Sam Brownback used to describe arts funding as a luxury his state couldn't afford. Now he is touting the potential of the arts to bolster the state's economy and attract new businesses. (AP)

A year ago, Governor Sam Brownback employed his line-item veto authority to shut down the Kansas Arts Commission, making Kansas the first state to eliminate arts funding from its budget. The Republican governor argued that art isn't a core function of government, and described it as a luxury the state could no longer afford.

This year Brownback quietly reversed course. He proposed the creation of a new “Creative Arts Industries Commission” that would focus on the potential of the arts and creative industries such as graphic design and architecture to help the state's economy.

In recent years, art for art's sake has been a tough sell in budget battles around the country: Overall, there has been a 37 percent drop in funding for state arts agencies since 2001.

Hoping to turn the tide, arts advocates have been focusing on art for the economy's sake, and that strategy is beginning to pay off. Even as state budgets remain tight, estimates from the National Assembly of State Arts Agencies show state arts funding increased by an average of 8.8 percent in the budget year that began in most states July 1.

“Some of the most powerful supporters of the arts don't participate in the arts themselves but believe in the merits of the economic arguments,” says Jonathan Katz, chief executive officer of the National Assembly of State Arts Agencies. “Everyone is really focused on maximizing the jobs benefits and the economic impacts.” A report released in June by Americans for the Arts found that the nonprofit arts and culture sector supports 4.13 million full-time jobs and generates $6.67 billion in state tax revenue nationally.

In Michigan, arts organizations will benefit from a 366.8 percent increase in state funding, the largest such increase in the country on a percentage basis. State Budget Director John Nixon says the state views this as an important investment in its future. “In order to have a robust economic climate you've got to have a robust quality of life, and the arts are a big part of that,” he says. “The money gets distributed and multiplied as it goes throughout the state.”

The National Assembly of State Arts Agencies urged this shift in strategy in a 2009 report for state arts advocates, Tough Times: Advocacy Strategies in an Economic Downturn. “The advocate's arsenal includes economic arguments that demonstrate how governmental support for the arts stimulates giving from the private sector, how the arts contribute to consumer spending, and how the arts fuel economic growth,” the report says.

Katz acknowledges that selling the arts community on this approach hasn't been easy. “It's frustrating for people who have seen their lives transformed by the arts to talk rather narrowly about one set of benefits, when they know there's so much more to argue about why supporting participation in the arts is a public good,” he says.

Sarah Fizell, executive director of Kansas Citizens for the Arts, said creating a new entity that everyone could be excited about was “a delicate dance” that required compromises along the way. Some arts advocates worry that the focus on the bottom line will detract from the focus on the arts, but Fizell believes the new commission's direction will help make the entire creative community in Kansas more effective and sustainable.

She also knows that emphasizing the economic benefit of the arts was critical to securing legislative support, since “you have to personally have been impacted deeply by the arts to be moved by the touchy-feely part of it." Kansas legislators were especially sympathetic to economic arguments this year because they had seen how their communities were affected by the elimination of arts funding last year.

In South Carolina, the arts community is emerging from a similar fight after Governor Nikki Haley used a line-item veto to eliminate all funding for that state's Arts Commission. Haley also vetoed an additional $500,000 in one-time funding for community arts programs that was supposed to compensate for cuts made over the past five years. Haley said citizens should be able to choose for themselves which charities and arts organizations they would like to support. “I think that we have an amazing arts community across this state,” she said. “I will you tell you, there is a difference between arts and the Arts Commission. The arts around this state are very good."

Because the fiscal year had already begun when Haley issued her vetoes, the South Carolina Arts Commission had to shut down abruptly for a few weeks until the legislature overrode the governor last week. In fact, Arts Commission employees had to wage a behind-the-scenes fight for the commission's life while they were shut out of their office. This is the second year in a row that Haley has vetoed all funding for the arts, and the second time the legislature has achieved the two-thirds majority necessary to override her veto.

Historically, South Carolina lawmakers of both parties have strongly supported the arts, and the legislature's Arts Caucus has grown substantially in recent years. “Most everyone in the general assembly is in the Arts Caucus,” says state Senator Wes Hayes, co-chair of the caucus. “It's not just about supporting the arts per se. When we debate arts funding, we're talking about art as it ties into tourism and quality of life. It's big business.”

The recent confrontations with the governor have only strengthened the sentiment. “I appreciate the favor that the governor has done us by really shoring up our support," says Ken May, executive director of the South Carolina Arts Commission.

In Kansas, the year without state arts funding took a toll. In addition to the loss of $700,000 in state money, the cut made the Kansas arts community ineligible for $1.2 million from the National Endowment from the Arts and a regional arts organization. It likely will be another year before the state becomes eligible for that funding again. "Most arts organizations and artists found a way to scrape by, but many did not,” says Henry Schwaller, former chair of the now-defunct Arts Commission. “They found themselves suddenly unemployed."

The Junction City Arts Council is one such casualty. As of August 3, the organization will no longer have a staff and will be forced to put a halt to most of the art classes and art exhibits it offers. The Council lost $10,000 from the state last year because of Brownback's veto and $100,000 from the city the year before. “Since 2010, we have pretty much survived on our reserves,” says Gail Parsons, the council's executive director. A volunteer-run board will try to continue offering some programming but has no funding for staff. They don't expect to see any state funding for at least a year.

Junction City, population 24,000, is the closest town to Fort Riley, a large military base, and the Arts Council classes have served as an important outlet for many who serve there and their families. “They can't call it art therapy but that's what they do,” says Fizell. “They do management of anxiety issues for kids who are dealing with frequent moves and having parents in unpredictable situations.”

Parsons supports the new Creative Arts Industries Commission, but she hopes it will strike a balance between economics and the creative process. “The arts industry is an economic driver,” Parsons says. “Here in Kansas, I don't think people realize that so much. On the other hand there's a lot more to the arts than just what makes money. When we give our kids a place to go and a way to express themselves in a safe and legal manner, how much is that worth?”