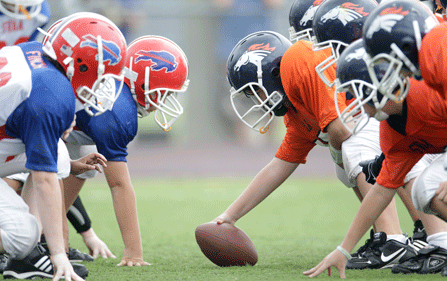 Youth in 38 states who show signs of concussion will no longer be returned to play without clearance from a health care professional. But which professionals are truly qualified to make that call? (AP)

Ohio State Representatives Michael Stinziano and Sean O'Brien thought they had a bill that would pass with no more than token opposition. It was a youth safety bill — a piece of legislation protecting young athletes who suffered head injuries on the playing field. Other states had taken similar action. The sponsors didn't expect a backlash. But a backlash is what they got.

It took multiple hearings and 10 rewrites to get the anti-concussion bill through the Ohio House. And it still faces an uncertain future in the state Senate. The reason has to do with the concerns of some doctors and the slippery problem of “return to play” decisions.

The bill aims to reduce the number of kids who suffer repeated concussions by requiring a coach to remove athletes from play if they show concussion symptoms and mandating that a health care professional sign off on their return to play. But which professionals are authorized to make that call? Some are bound to be excluded. Many legislators, says Stinziano, have an optometrist or a physical therapist in their district who is concerned about being cut out as an authorized concussion expert who could return a kid to play. Rural representatives argue that for their constituents, getting an athlete to a doctor or hospital for an evaluation can be too time-consuming to be practical.

The Ohio House reached a compromise and passed the bill by allowing each school district or governing authority of a chartered or private school to authorize which licensed health care providers can make return-to-play decisions. Stinziano acknowledges that while the doctors don't love it, it's what was needed to move the legislation. “This issue is not necessarily resolved,” Stinziano says, “and we have our work cut out for us in the Senate.”

The debate in Ohio follows a series of state youth concussion safety laws enacted since 2009, when Washington became the first state to create a law codifying the procedures for returning a young athlete to a game after sustaining a concussion. The Washington legislature was spurred to action by a serious injury to a middle school football player, Zackery Lystedt, who in 2006 was returned to a game after sustaining a concussion and suffered serious brain damage following a second hit.

Lystedt and his family lobbied the Washington legislature, and since then, the National Football League, which routinely sends its own players to testify in statehouses on concussion legislation, has been a key force behind the changes in 38 states. The urgency of the legislation has also been influenced by new research showing that repeated concussions can have life-altering repercussions, such as early-onset Alzheimer's disease, dementia, and increased risks of suicide. At least 2,000 former NFL players recently filed a lawsuit against the NFL claiming that the league deliberately misled them about the health risks of concussions. In an effort to make sure that youth stay safe from these dangers, at least eight states enacted concussion laws that went into effect this year.

Each state's law is slightly different. For instance, in New York and Minnesota, where, as in Ohio, debates surrounding access to care threatened the legislation's success, the laws do not specify which health care professionals can return a youth to play after sustaining a concussion. The NFL has not weighed in on the issue; it has specifically left it up to states to decide which doctors are qualified to make the decision.

There's a balance that must be struck, says Dawn Comstock, professor at Ohio State University's Center for Injury Research and Policy, between who really has the knowledge to evaluate a concussion and the level of access to those people. “Maybe a neurologist might be the best person to make the decision,” says Comstock, “but how many neurologists are out there? In reality, if the kid can't access whoever is allowed to make the return-to-play decision, they're going to be more likely to hide the fact that they have a concussion.”

Concussion reporting on the rise

According to data collected by the Centers for Disease Control, the number of emergency room visits by youth suffering from concussions or other traumatic brain injury sustained while playing sports increased by 62 percent from 2001-2009. While the rise is significant, says Julie Gilchrist, medical epidemiologist at the CDC, the increase is likely due to a heightened awareness of concussions, not to the fact that sports are more dangerous. “It's sad to see in one way,” Gilchrist says, “but it's good that people are seeking care.”

Boys' high school football had the highest rate of overall concussion at 6.94 per 10,000 athletes participating in school-sponsored practice or competition from 2008-2011, according to data from Ohio State University, followed by boys' ice hockey at 6.11, boys' lacrosse at 4.21 and girls' soccer at 3.83.

And while states are legislating protocols for what to do after a concussion is sustained, many sports associations are taking actions to prevent the injuries from happening in the first place. Minnesota Hockey, which governs more than 50,000 hockey players from ages 5 to adult, recently increased penalties for checking from behind, the practice of skating up from behind a player and pushing him before he has a chance to defend himself. After a Minnesota high school hockey player, Jack Jablonski, was paralyzed by getting checked from behind in January, the state's governing body for youth and amateur hockey decided to impose a minimum five minute major penalty for checking from behind, up from a two minute penalty.

Scott Gray, vice president for publicity and promotion for Minnesota Hockey, says that the change is aimed at preventing concussions and other serious injuries. “Most of the feedback that I've heard has been fairly positive,” says Gray, who is also a parent of a hockey player. “My son is a junior in high school and it's hard to sit in the stands as a parent and watch your kid get blasted.”

But so far, none of the legislative efforts has addressed prevention, and Comstock says prevention isn't much of a research focus either. “All of the research has been going into diagnosing concussion and managing it, but hardly anything has gone into primary prevention. Not a single piece of any of these laws is going to keep a kid from getting a concussion in the first place.”

That being said, any focus on concussion legislation is encouraging to many in the sports community. “People are fervent about their sport,” says Gray, the Minnesota Hockey dad, “and somewhere in there you have to pack in safety, development, costs… but safety has become job number one as far as we're concerned. It's going to be a better sport because of it.”