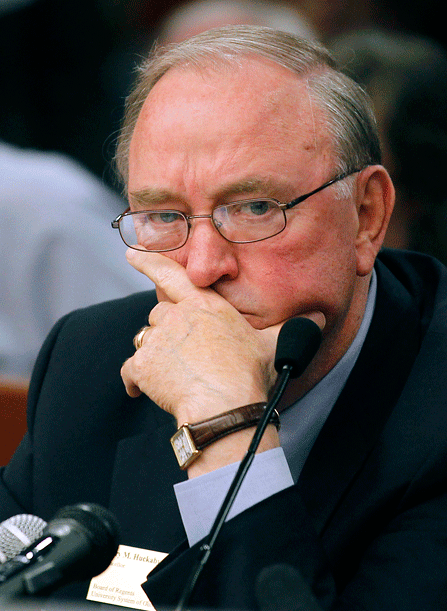 Soon after he took office last summer, the new chancellor of Georgia's university system warned that the state could no longer afford the status quo. Hank Huckaby talked about using Georgia's 35 public campuses more efficiently, and rigorously reviewing the designs for new facilities. But the suggestion that generated the most interest—and controversy—was his call to merge several Georgia colleges.

“We must ensure that our system has the appropriate number of campuses around the state,” Huckaby said. “We in the university system should be the first to ask questions of ourselves to make sure we are serving the state in the best way.”

Several months later, Huckaby announced that by the fall of 2013 the state would combine eight Georgia colleges into four new institutions, with new names and academic missions. One of the main reasons for the move, he said, was to save money at a time when Georgia's finances are tight.

Merging colleges is usually a last resort. And yet a few states, constrained by the lackluster economy and tight budgets, are reluctantly traveling down that road. “I don't think that any institutions that could afford to do otherwise would merge,” says Dennis Jones, president of the National Center for Higher Education Management Systems, a non-profit organization that seeks to improve higher education decision making.

The Georgia merger has brought scattered protests by community members who fear losing their jobs in the affected college towns. But that reaction pales in comparison to what happened when a similar merger was announced in New Jersey.

In that state, critics contended that the initially proposed plan for Rowan University to absorb much of Rutgers University's Camden campus was driven more by the self-interest of insurance executive George Norcross, a powerful Democratic fundraiser who helped launch a medical school at Rowan, than by what's best for students. New Jersey Senator Frank Lautenberg even called on the U.S. Education Department to investigate whether the plan would lead to higher tuition for students. A final proposal, which keeps Rutgers-Camden intact and separate from Rowan, awaits the approval of Governor Chris Christie.

The logic seems unassailable: Maintaining fewer schools should cost less money. But consolidation doesn't necessarily yield savings. “I don't know that there's ever a place where it's proven to be the case,” Jones says. “I do know and believe strongly that there are serious costs associated with trying to pull something like that off.”

In part, that's because campus mergers rarely result in closed campuses. A month ago the editorial board of the Harrisburg Patriot News called for Penn State University to consider closing some of its 24 branch campuses after a meeting with the university's president, Rodney Erickson. But that idea hasn't gained any currency with Penn State officials, according to university spokeswoman Jill Shockey. The university system, consumed by the Jerry Sandusky child sex abuse scandal, hasn't considered it.

Closing branch campuses isn't part of the plan in Georgia or New Jersey either, and the consolidations might even end up costing the states more money. Some of the merged institutions in Georgia are slated to become universities with more ambitious, and expensive, research missions. There aren't cost estimates yet in New Jersey, but it could cost Rutgers and Rowan University millions to absorb parts of the beleaguered University of Medicine and Dentistry of New Jersey. George Norcross's brother Donald, one of the sponsors of the legislation, said in a statement that he hopes the plan will lead to increased state funding for higher education.

Georgia officials deliberately have avoided citing a savings target. In 2009, when the state merged its technical colleges, the quest to reach a stated savings goal overshadowed the academic aspects of the move.

“That number became the whole reason and rationale for doing the consolidations,” says John Millsaps, a spokesman for the Georgia university system. “That's not the primary goal.”

Instead, Millsaps says the goal is to pump any administrative savings back into academics. The eight colleges and universities are supposed to identify areas in which they can become more efficient, in some cases by laying off redundant workers. But campus consolidation committees also are committed to rethinking the academic mission of their campuses, including rewriting admissions policies. And they will have to decide on new names and mascots for the merged institutions.

None of those changes will be easy, says Shelley Nickel, the associate vice chancellor for planning and implementation at the university system and one of the architects of the change. “These institutions are steeped in their own history and their own culture,” she says. “We're forcing people to do this in 18 months.”

The new institution comprised of Macon State and Middle Georgia College is expected to become a university after the first phase of the merger is complete, as is the new institution comprised of Augusta State University and Georgia Health Sciences University. While Georgia's plan has attracted broad support from politicians, including Republican Governor Nathan Deal, and local leaders in the affected college towns, some faculty are concerned about the changes.

“[Some of the consolidations] seem to make sense by combining the efforts and populations of geographically nearby institutions,” Chris Huff, co-chair of the university system's faculty council, said in an e-mail, “others seem to lack any clear rationale that would relate to improving student education.”  Some faculty are concerned that tougher academic standards at newly merged institutions could leave some students shut out. University officials also acknowledge that some of the new institutions will have new tenure requirements for professors. Huff says he and other faculty council members were miffed at not being consulted about the consolidation plan when it was conceived, but that he is optimistic that faculty will be more involved going forward after a meeting last month with the system's new chief academic officer, Houston Davis.

The initial plan to merge Rutgers-Camden and Rowan aroused the ire of faculty, students and alumni at all three Rutgers campuses. The university's two governing boards, one of which includes a majority of appointed officials, the other of which is comprised primarily of alumni, both fought to block the merger, citing a 1956 New Jersey law giving them final approval over changes in ownership of Rutgers.

The final plan, which establishes a partnership between Rutgers-Camden and Rowan but maintains each school's independence, won the approval of 9 of 11 members of the Board of Governors. The board members said in a statement that they hope incorporating components of UMDNJ “could elevate Rutgers' status to among the top 25 most elite research universities in America.” Under the changes, Rowan University, which will inherit UMDNJ's osteopathic medical school, will become the state's second comprehensive research university, according to New Jersey legislative staffers, which makes it eligible for additional state support.

“Only six had cracked into the top 50 in 30 years,” he says. “There's not a lot of research universities that have emerged and wandered into the top 40 and 50.”