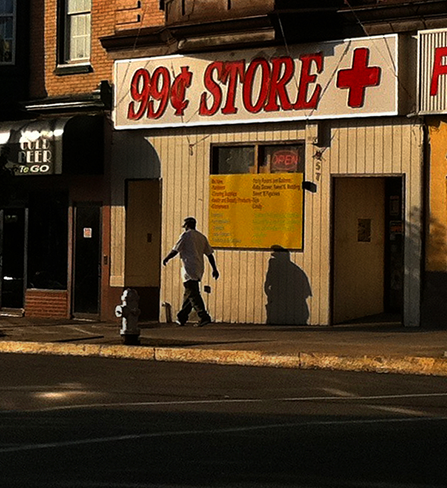 The city of Reading, with a massive poverty problem, is one of the communities signed up for state relief. (Michael Williamson/The Washington Post via Getty Images)

Brian Jensen, an economic development specialist, calls it “the measles map.” The drawing shows an outline of Pennsylvania with 27 red splotches marking financially distressed cities in every corner of the state. Four in 10 Pennsylvanians live in one of them.

The cities and towns qualify for a 25-year-old state program aimed at rescuing worst-case local governments that have chronic budget deficits, are in danger of failing to pay employees, or face default on their bond payments. Officials simply call the program “Act 47,” the title of the legislation.

Pittsburgh is the largest Act 47 city. Harrisburg, the state capital, is the best known recent addition because of its fight to avert bankruptcy. There's also Scranton, where the mayor this week cut city workers' pay to the minimum wage, $7.25 an hour. Reading, the poorest city of more than 65,000 people anywhere in America, is an obvious participant. Philadelphia would qualify but lawmakers created a separate oversight board to handle its problems. More aching cities may soon be added in the state that has the most local governments in the country after Illinois.

If Pennsylvania's goal is, as the law says, “to foster fiscal integrity” of its local governments, Act 47 has had modest results. Only six cities have successfully emerged from the program, and a dozen of those remaining have been distressed for more than 10 years. Johnstown has submitted five recovery plans since joining in 1992. Aliquippa and Farrell, the first to be designated as Act 47 cities, are still in the program 25 years later.

“We've had success with it and we've also had failure with it,” says Fred Reddig, head of the state department that runs Act 47. He spoke earlier this year at a conference on distressed local governments at the University of Pennsylvania.

Other states have similar programs to monitor, assist and oversee local government finances. Some, such as North Carolina, are better at preventing catastrophes because of tight state oversight of local budgets. However well intentioned, Pennsylvania demonstrates how a combination of forces beyond its control, anachronistic state policies and local governments' own mistakes can block progress at helping cities rise from a cycle of despair.

“The problems that Pennsylvania municipalities face run far deeper than Act 47 can or was intended to resolve,” says Jensen, executive director of the nonprofit Pennsylvania Economy League of Southwestern Pennsylvania.

For one thing, states do not manage the global economy. The drop in manufacturing jobs in Pennsylvania, especially in the steel and textile industries, hurt cities large and small. But it was caused by external events, including increased foreign competition, advances in worker productivity and a series of crippling recessions. Between 1990 and 2009, manufacturing jobs declined 40 percent in Pennsylvania. Aliquippa, northwest of Pittsburgh, was typical. Its main job provider was an LTV Corporation steel mill that employed 14,000 workers at its peak but fell to 3,500 by 1988, when the city entered the Act 47 program. The collapse of the plant, which closed altogether in 2000, drained so much tax revenue that Aliquippa had trouble delivering basic services.

Aliquippa and Pennsylvania did not start the recession of 1981-1982, when the steel and coal industries began their decline, or the Great Recession of 2007-2009, which added four cities and towns to Act 47 and prevented others from escaping it. One of the latter is Chester, a Delaware River city south of Philadelphia that was powerless to stop the realignment from manufacturing to service and technology. Companies and people, most of them affluent whites, started fleeing Chester in the 1960s for jobs, better housing and superior schools elsewhere in the area. Tax revenue fell so precipitously that the city failed to balance its budget for six straight years before state officials accepted Chester into the Act 47 program in 1995. On a larger scale, Pittsburgh went through a similar emptying out of its urban core, culminating in a 2003 financial crisis that led to 446 layoffs of city workers, including 100 police officers. Though still in Act 47, Pittsburgh has recently climbed back by replacing manufacturing with health care, education and technology jobs.

Local officials also cannot predict natural disasters or when a judge might rule against them. In Plymouth, outside of Philadelphia, extensive flooding from the remnants of Hurricane Ivan in 2004 heightened the township's financial crisis. Three months later, a fire swept through the Municipal Building, disrupting operations for months and delaying Plymouth's recovery.

Westfall Township in northeast Pennsylvania took the rare step of filing for bankruptcy protection in 2009 after a federal judge awarded $20 million to a developer whom township officials had refused permission to build houses and a hotel. The township only brings in about $1 million a year in revenue.

A state Supreme Court ruling throttled Scranton, an Act 47 city for 20 years. To check rising labor costs in its budget, the city tried to freeze wages and cut benefits for unionized city police and firefighters as part of its financial recovery plan in 2002. But arbitrators awarded workers bonuses and raises, saying city officials could not use Scranton's distressed status “to deny employees a fair living.” Following years of litigation, the high court sided with the workers, saying that a city's Act 47 recovery plan does not negate Pennsylvania's law providing binding arbitration to public safety workers in return for their agreement not to strike. The October, 2011, ruling knocked a $30 million hole in the city's budget, Mayor Chris Doherty says: “Scranton did everything we were asked to do and then we got bit by the state.”

Doherty and other city officials say the court ruling is more proof that state law has tipped in favor of organized labor in arbitration awards and public pension and retiree health care benefits. They say that until the Legislature, local officials and union leaders collaborate to change state law to allow municipalities cap personnel costs based on a government's ability to pay, Pennsylvania inevitably will confront more Act 47 cities.

York, just south of Harrisburg, is on the verge of joining the program because of runaway police and firefighter costs. Arbitrators have twice boosted public safety retirement benefits, triggering job cuts and steep sewer fee and property tax increases. Still, city officials are projecting a $51 million budget shortfall by 2016. “We try to write as many parking tickets as we can,” quips Michael O'Rourke, York's business administrator.

Local government officials also have urged state lawmakers to improve what they call Pennsylvania's antiquated, unfair tax structure. A common thread running through the distressed cities is that they are barred by state law from collecting property taxes from government buildings, churches, hospitals, colleges and social service agencies. This restriction removes a huge potential revenue source for many cities at a time when their costs are rising faster than revenue. Over half of the assessed value of property in Harrisburg and Johnstown is tax exempt. Lawmakers have considered but not approved legislation that would channel state money to local governments with large amounts of tax-exempt property.

In many places, the tax-exempt properties serve a majority of people who live outside the city but do not pay taxes to finance the city services they enjoy. Pennsylvania has an earned income tax but suburban commuters pay that to the communities where they live, not where they work. In York, 8,000 residents pay the tax on $345 million of income while 38,000 commuters earn $1.1 billion in the city but pay nothing to York for the cost of services.  Former governor Ed Rendell says the cities' inability to collect tax from nonprofit organizations is their “single biggest problem.”  Lawmakers from suburban jurisdictions tend to fight commuter wage tax proposals to protect their constituents. “There's no political will to address the underlying causes of distress,” says York's Michael O'Rourke.

Pennsylvania's cities are creatures of the state but they contribute to their own distress through mismanagement, political infighting and poor financial judgment. Reading has a history of sloppy recordkeeping, borrowing from its sewer fund for other operations without paying the money back and failing to make its annual public pension payments. Scranton and Harrisburg officials are harshly split between mayor and council over how to manage their fiscal crises. Scranton mayor Doherty cut city workers' pay without the council's consent. Harrisburg's collapse is due in large part to bad decisions by elected officials about a failed trash incinerator.

Harrisburg, Scranton and Allentown officials have engaged in a risky pattern of guaranteeing the obligations of financially shaky independent authorities that issued debt for Harrisburg's trash incinerator, Scranton's downtown parking garages and Allentown's never-built hockey arena. The authorities cannot pay their debt, sticking the cities with those costs on top of their other financial challenges. Taxpayers are left out of decisions because they do not vote on the bond guarantees.

The state, through Act 47, can do only so much. The coordinator whom the state appoints to prepare a recovery plan for a distressed city has no power to force the jurisdiction to carry out what he suggests. The act also allows local officials to raise taxes above what the state usually permits, but they are often reluctant to alienate voters by doing this. The state does offer emergency loans and grants to help pay bills but it is not as if Pennsylvania has plenty of spare cash. It advanced Harrisburg $3.6 million in 2010 to avert default, but that was an exception. “It's not a panacea,” state administrator Reddig says.

One way to strengthen the program, Reddig says, would be for the state to offer incentives to relatively healthy local governments to merge with weaker ones. In this way, governments would share the tax base; the Minneapolis-St. Paul region pioneered the tax-sharing concept. Combining governments, though, is difficult. In 2004, voters in five local jurisdictions in Pennsylvania's Mercer County rejected consolidation because they did not want to subsidize the two poorest cities.

“We're going to have to come to a point,” Jensen says, “where labor and taxpayers grapple with what it will take to operate a municipality and what sacrifices will have to be made. We're not yet set up to have that conversation.”