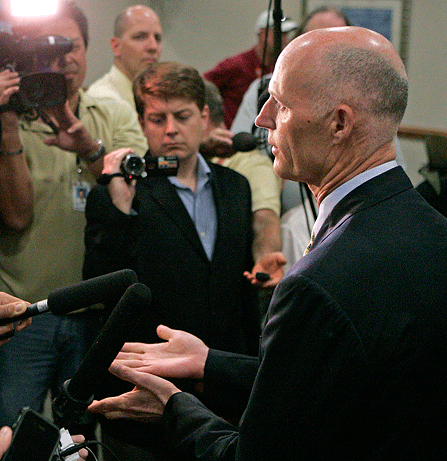 Florida Governor Rick Scott is one of roughly a dozen GOP governors who say they are likely to reject the Medicaid expansion – and federal money – in the Affordable Care Act. (AP Photo)

Skeptics say the Republican governors who have pledged not to take part in the health-care law's Medicaid expansion are just posturing, and that eventually they will succumb to the lure of federal dollars. They note that several GOP governors initially refused stimulus money on political principle, but eventually accepted it because their states were desperate for help.

“I am confident that, in the end, virtually every state will expand its Medicaid program,” said Ron Pollack, executive director of Families USA, a non-profit group that advocates for expanded health care coverage. “Millions of people will gain coverage, and states will never have to pay more than a dime on the dollar to make it happen. It is therefore fiscal malpractice for governors to turn down the Medicaid expansion.”

But even those governors who eventually accepted the stimulus money may be wary of participating in the expansion of Medicaid, the jointly funded federal-state health care program for low-income people.

The federal government currently pays 50 percent to 80 percent of the cost of Medicaid coverage in each state, with the poorest states getting the largest proportion of federal money. But many of the states that would qualify for the highest federal match already leave federal money on the table by maintaining Medicaid programs that are more restrictive than they have to be.

For the first three years of the Medicaid expansion under the Affordable Care Act, which takes effect in 2014, the federal government will pick up 100 percent of the new costs. But starting in 2017, the federal share will gradually decline until it reaches 90 percent in 2020, where it will remain. Even that 10 percent share may be too much for some states to bear.

In its June 28 decision upholding the Affordable Care Act, the Supreme Court ruled that if a state chooses not to participate in the law's Medicaid expansion, the federal government cannot take away its existing Medicaid money.

“States have made consistent choices over four decades to keep a modest Medicaid program, when they could have had a bigger one at an 80 percent federal match rate,” says Chris Whatley of the Council of State Governments. “Why not turn down the expansion now at 90 percent? It's not that big of a difference.”

Matt Salo, director of the National Association of Medicaid Directors, notes that states already are struggling to cover their share of Medicaid, which is the fastest-growing part of state budgets. “Ten percent of a very large number is a lot of money,” Salo says.

If history is a guide, it might be years before the recalcitrant states agree to participate—if they ever do.

The federal government launched Medicaid as an optional program in January 1966. Today every state participates, but that wasn't always the case: Only six states signed up initially. Eight states didn't join until 1970, and Arizona didn't participate until 1982.  And it took years for every state to join the Children's Health Insurance Program (CHIP) expansion Congress approved in 1997.

In addition to the new people who will be eligible for the program under the new guidelines, millions of people who qualify now but are not enrolled are expected to sign up through health insurance exchanges and automatic enrollment programs.

As many as 13 million low-income people, who are likely to be sicker than most of the population, are expected to enroll through the exchanges, says Salo. States will have to pay for those new members at their regular Medicaid matching rate.

When you combine that enrollment bump—which will happen whether or not a state opts to expand its Medicaid program—with the steady increase in health-care costs generally, some states may decline to participate in the expansion, even if they do have to forfeit federal dollars.

Although the lineup is shifting, more than a dozen Republican governors have suggested they might decline to participate in the Medicaid expansion. Governors in Florida, Iowa, Kansas, Louisiana, Nebraska, Texas, South Carolina and Wisconsin have said they will not participate. GOP governors in Alabama, Georgia, Indiana, Mississippi, Nevada and Virginia indicate they are leaning in that direction.

Meanwhile, about a dozen Democratic governors have said their states will opt in. The rest have not declared their intentions.

According to Kaiser, most states opting into the expansion likely would have to ramp up their Medicaid spending between 2014 and 2019, but four would spend less (Hawaii, Maine, Massachusetts and Vermont) and several others would have to boost state spending only slightly.

Mississippi's Medicaid program, for example, cost a total of $4 billion in 2011—the federal government paid $3 billion, and the state paid $1 billion. Expanding that program to everybody at or below 138 percent of the federal poverty line would cost the state as much as $581 million between 2014 and 2019, according to Kaiser's 2010 study.  That's a 6.4 percent increase in state spending compared to what Mississippi would spend without an expansion

The day after the Supreme Court ruled the Medicaid expansion was optional, Mississippi Governor Phil Bryant, a Republican, said: “Although I am continuing to review the ruling by the Supreme Court, I would resist any expansion of Medicaid that could result in significant tax increases or dramatic cuts to education, public safety and job creation.”

One question that has cropped up since the high court's decision is whether the federal government will set a hard deadline for states to declare their intentions. Since the law considered the Medicaid expansion a done deal, no decision process was outlined.

Within state capitols, some officials are also questioning whether governors alone can make the decision. According to the National Conference of State Legislatures, lawmakers will have to weigh in on the Medicaid expansion choice in most states since millions of dollars are at stake.

Another question is whether states can cover fewer people—those with incomes at or below the poverty level, for example. Those above the poverty level would be eligible for federal tax credits to purchase insurance on the exchanges. States also want to know whether they can offer expanded Medicaid coverage initially and opt out later if the cost becomes too burdensome.

In a July 3 letter to the U.S. Centers for Medicare and Medicaid Services, which administers the Medicaid program, the National Association of Medicaid Directors posed these and dozens of other questions.

Until they get definitive answers, many states will be busy weighing the costs of expansion against the potential benefits of a healthier population, more health care jobs, and higher revenues for hospitals and other health care providers.