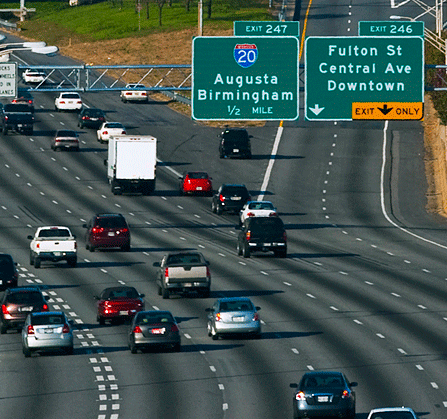 ATLANTA — Some 33,000 people work in the Atlanta neighborhood near Emory University. Besides the school, it is home to a children's hospital, a senior center, a veterans hospital and the U.S. Centers for Disease Control and Prevention. But the neighborhood has no direct access to the area's public rail system or to an interstate highway.

Driving in and out of the congested streets is a frustrating experience that is all too common for commuters. But on July 31, voters will decide whether the latest plan to “untie Atlanta” is worth billions of dollars in new sales taxes. A win for the tax increase would be one of the most significant developments in decades for a region where sprawl long ago outgrew the transportation network.

Every region of Georgia will make its own decision whether to impose a new penny sales tax on itself, and each of those regions has its own set of pre-determined projects. But most of the attention is on metropolitan Atlanta, where supporters of the ballot measure have produced a list of 157 projects chosen by regional leaders to show voters what they would get for their money.

On the Emory campus, the main focus is on the “Clifton Corridor” light-rail line that would connect Emory and the Centers for Disease Control to an existing rail station. Betty Willis, one of the leaders of the project for Emory University, says the area will not be able to reduce traffic congestion without transit. “We have employees who come from all over the metro region,” she says. “The hope is that a lot of these folks will have the option of not driving and being able to hop on the MARTA (rail system) and get right on the campus without having to drive.”

Emory University has done plenty already to discourage people from driving alone on campus. Staff get free transit passes. The bike-share program is free, too. Shuttle bus service is frequent, and on-campus parking is hard to find. The university is helping to build mixed-use developments near the CDC, and area residents are eager to move in.

Those efforts can only go so far, though. Many employees who do not live locally must travel through wooded residential areas on winding two-lane roads to get to their jobs. Backups at stoplights and congested thoroughfares create problems. It took four hours to evacuate the CDC after the September 11 terrorist attacks, when federal officials feared the laboratories could be a target. On an everyday basis, the traffic and isolation make it harder for children, seniors and veterans to get to the area's many medical facilities.

In the metro Atlanta region, about half of the new money from the sales tax increase would pay for roads; the other half would pay for alternatives such as public transportation, bike paths and sidewalks. All told, the Atlanta-area tax would devote $7.2 billion to transportation.

The rail line for the Clifton Corridor has been on the drawing board since at least 1996, when Willis says she started working on it. Engineers have drafted options for elevating the train along small stretches to avoid hills and for boring tunnels to keep neighborhoods intact. But the biggest obstacle has always been a lack of money. The 3.7-mile rail line is expected to cost $700 million.

With so much tax money at stake for projects around the Atlanta region like the Emory rail line, scrutiny over which projects were chosen for the regional list and which were not has been intense. The Sierra Club, NAACP and the Tea Party all oppose the measure, citing different objections to the final list.

But proponents have broad backing, too. Atlanta's Democratic mayor and Georgia's Republican governor are both on board. Major corporations back it, as do all of Atlanta's sports teams. Citizens for Transportation Mobility, a group promoting the idea, is prepared to spend at least $7 million to convince voters of the need to act.

Proponents see the issue as more than just a matter of making it easier to drive and ride around the Atlanta region. Saba Long, a spokeswoman for Citizens for Transportation Mobility, says shorter commutes could mean more jobs. The region's inability to solve its traffic woes scared off Chiquita and Time Warner from moving their headquarters to Atlanta, she says, and younger workers are attracted to places with better access to public transportation. “This,” she says, “is Metro Atlanta versus Charlotte or Dallas or Seattle.”

But many people in the region do not view the question that way. They worry that their tax dollars are going to distant projects that cost too much. Metro Atlanta is, after all, an area with deep divisions between the city and suburbs, blacks and whites, Republicans and Democrats.

John Evans, president of the DeKalb County NAACP, is upset that the list of projects does not include a long-sought rail extension to the predominantly black neighborhoods of south DeKalb County. The blueprint approved by regional officials set aside money to explore either a rail line or a bus route for the area, but that is well short of the guarantee Evans says is needed.

The NAACP also objects to what it sees as unfair taxation of residents in DeKalb and Fulton counties, the two that contain the city of Atlanta. If the referendum passes, residents in those two counties would have to pay twice as much sales tax for transportation as residents of neighboring counties. That is because Fulton and DeKalb already foot the entire bill for subsidizing Atlanta's rapid transit system with a separate penny sales tax, which they have paid for 40 years. “Eight counties never paid a penny, but two counties have paid it for more than 30 years,” Evans says. “We'll pay two cents and we'll still get less.”

The Sierra Club wants voters to defeat the proposal largely because it claims too much of the money would be spent on road projects. The group says the list is a “hodgepodge of conflicting priorities when what is needed is a bold and consistent vision” that emphasizes public transit.

Tom Maloy of the Georgia Tea Party, who lives in Atlanta's northern suburbs, also scrutinized the list and did not like what he found. “There are not enough road projects,” he says. “Along with that, the road projects that are in the project list, some of them are ill-conceived, some of them don't make any sense, some of them are put in places where there really isn't that much congestion.”

But Long, from the Citizens for Transportation Mobility, cautions against people looking only at how their home communities would fare under the plan. Three out of five commuters in the Atlanta region work in a different county than the one they live in. “As taxpayers, our money goes to Kansas and we're OK with that,” she says. “Why is it not OK when that money is spent in the county right next to me?”

Georgia has been trying to reduce traffic in the Atlanta area since Jimmy Carter was governor in the 1970s, but little has happened other than the creation of a two-county transit system four decades ago. The current effort started under Georgia's previous Republican governor, Sonny Perdue, but it stalled in the legislature until his final year in office.

Legislators put off the vote for two years, in part to wait until economic conditions improved. But Georgia's unemployment rate is still 8.9 percent, higher than the national average. “It is on the ballot on what is probably the worst possible time to be on the ballot,” says Republican political consultant Joel McElhannon. “We've kind of stumbled through all this.”

The dismal economy will discourage voters from supporting a new tax, says Maloy, the Tea Party member. “When a poor person or someone who is out of work or somebody on a fixed income goes to a grocery store… it's going to cost them a penny on the dollar more for their groceries,” he says. “Everything they buy is going to have this tax on it.”

When lawmakers first passed the bill creating the referendum, the Tea Party was still a new player on the political scene. But now its members are better organized in Georgia, and they are working to defeat the new tax. The electorate will also likely be heavily Republican, because there are more spirited primary contests on the GOP ticket following the historic Republican gains in Georgia in 2010.

“With the Democratic Party at its weakest since sometime before Andrew Jackson, the primary competition will be concentrated on the GOP side, which hurts the (transportation referendum's) prospects,” argues Charles Bullock, a University of Georgia political science professor. Heavy turnout by Republicans, Bullock says, “makes passage prospects dim.”

But McElhannon, the Republican consultant, says there might be hope for traffic relief, even if the measure is defeated. “The solution to this comes from a governor who is willing to make this his Number One issue,” McElhannon says. Perdue left office before he could see the plan through, but according to McElhannon, Governor Nathan Deal is in a good position to take on the issue. “He has great relationships with the General Assembly,” McElhannon says. “He's not afraid to take on big issues, and I would expect him in the aftermath of this to probably come up with a real solution.”