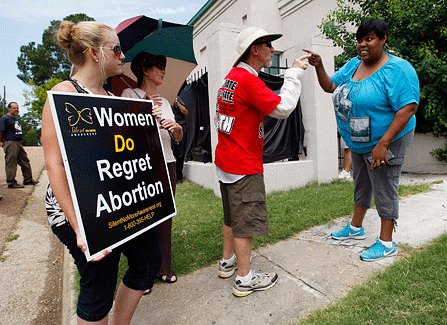 By the end of this week, Mississippi may be the only state in the nation to have no abortion clinic within its borders.

A federal judge will decide on Wednesday whether or not to continue blocking a new law that would effectively shut down the one such clinic remaining. The law, signed by Governor Phil Bryant in April, requires doctors performing abortions to be board-certified OB-GYNs and to have admitting privileges at local hospitals. That is a condition that the Jackson Women's Health Organization says it cannot meet.

The Center for Reproductive Rights has filed a federal suit claiming that the law would illegally ban abortion by “imposing medically unjustified requirements on physicians who perform abortions.” According to Diane Derzis, the clinic's owner, all three of the clinic's doctors are board-certified OB-GYNs, but two of them are from out of state and do not have local hospital privileges, despite their efforts to obtain them. U.S. District Judge Daniel Jordan granted an injunction against the law on July 1, but the injunction will expire Wednesday unless Jordan extends it.

“We have literally stopped abortion in the state of Mississippi,” State Representative Bubba Carpenter told the Acorn County Republican Party a few weeks ago.

Mississippi's battle over abortion may be the most extreme in the nation right now, but it is far from the only one. On the state level, 2012 has brought a near-record number of anti-abortion laws and provisions. Thirteen states have passed some type of legislation restricting abortion: Arizona, Georgia, Utah, Virginia, South Dakota, Oklahoma, Alabama, Maryland, Mississippi, Louisiana, Texas, Wisconsin and Kansas. Altogether, there have been 40 abortion restrictions enacted into law, according to Elizabeth Nash of the Guttmacher Institute, a DC-based advocacy group which supports abortion rights.

The number of anti-abortion provisions is likely to fall short of the number enacted last year, when there were 92 of them passed in 24 states, up from the previous all-time high of 34 abortion restrictions enacted in 2005. But the flurry of anti-abortion bills is unusual in an election year when legislative sessions are shorter and some legislatures do not meet at all.

“It is remarkable that we are seeing this many abortion restrictions becoming law,” Nash says. “States aren't banning abortion, but what they're doing is piling restrictions so a woman or provider will say, ‘You know what? I can't do this anymore.' They're trying to eliminate abortion in their state without going through the court process and overturning Roe.”

The uptick in anti-abortion legislation both this year and last year can be attributed in large part to the 2010 elections, in which Republicans won their largest majorities in state legislatures in more than 70 years, and elected 29 of the nation's 50 governors.

“We've had some victories this year,” says Mary Spaulding Balch, director of state legislation for the National Right to Life Committee (NRLC). Balch credits the victories to the NRLC's success in promoting its “Pain-Capable Unborn Child Protection Act” at the state level. The act, which asserts that fetuses 20 weeks after fertilization are capable of experiencing pain, has been used as a model for outlawing late-term abortions. (According to Nash, only a very small percentage of abortions—roughly 1.5 percent—occur after 20 weeks.)

The nationwide fetal pain legislative movement is “a well-coordinated effort, I have to give them that,” says Douglas Laube, board chairman of Physicians for Reproductive Choice and Health, which opposes it. But Laube insists that the Pain Capable Child Act “has no basis in any kind of accepted scientific fact.”

Nebraska was the first state to pass a fetal pain bill in 2010. Last year, Republican-controlled legislatures in Alabama, Idaho, Indiana, Kansas and Oklahoma passed similar laws. In March of this year, Georgia's Republican legislature passed a bill banning abortions after 20 weeks except to save the life of the mother or if the pregnancy is deemed “medically futile” due to severe fetal abnormalities. The bill was signed into law in May by Republican Governor Nathan Deal.

In April, Arizona Governor Jan Brewer signed into law the Women's Health and Safety Act, which bans abortion after 18 weeks gestation, or 20 weeks past the woman's last menstrual cycle. (The law does allow for late-term abortions in case of medical emergencies.)

Then, in June, Governor Bobby Jindal of Louisiana signed a similar bill into law after it was passed unanimously by the state House of Representatives. The Louisiana law provides that doctors violating the 20-week ban could serve up to two years in prison. It provides an exception for the life of the mother, but not for rape or incest.

Arizona State Representative Kimberly Yee says she modeled her state's fetal pain law after similar ones enacted in other states, but “customized” it to fit Arizona statutes.

Yee's law puts strict constraints on the conditions under which nonsurgical abortions can be prescribed by doctors; requires parental consent for minors; includes a mandate for the state to build a website depicting fetal development; and requires abortion clinics to post signs stating that it is illegal to coerce a woman into having an abortion. It also makes it a misdemeanor for a doctor to perform an abortion past 20 weeks except to save the life of the mother.

“A lot of states are looking at issues of the importance of life,” says Yee. “I believe there is a public sentiment that these issues are critical.”

State Representative Matt Heinz, a physician who voted against the Arizona bill, says that the law will discourage high-risk obstetricians from practicing in the state. “This is legislative malpractice,” Heinz says. “The legislature is not trained in medicine.”

The most dramatic abortion debate of the year has taken place in Michigan, where at one point, abortion legislation turned into literal theater.

At the height of the debate, playwright Eve Ensler flew in to give a reading of “The Vagina Monologues” on the steps of the state Capitol in Lansing. The reading, attended by thousands, was staged with a dual purpose: to protest both the abortion-restricting bill passed by the Michigan House and a one-day speaking ban imposed on two female Democratic lawmakers, one of whom used the word “vagina” on the House floor.

The Michigan bill is by far the most sweeping in scope of any in the country so far.

HB 5711, passed by the Michigan House on June 13, requires that the remains of an abortion or miscarriage be buried or cremated; requires medical personnel to counsel women against being coerced to have an abortion; prohibits physicians from prescribing medical abortions over webcam; requires abortion doctors to carry greater liability insurance than other physicians and requires that abortion clinics performing several outpatient procedures a month be licensed. The bill has yet to be voted on in the Michigan Senate.

Two other bills are pending in the Michigan House. HB 5713 would ban abortion after 20 weeks unless the mother's life is in danger; it states that a woman cannot be threatened into having an abortion, either physically or financially, and asserts that fetuses at 20 weeks are capable of feeling pain. The second bill, HB 5712, establishes sentencing guidelines on coercing abortions or performing an abortion after the 20-week cut-off.

“There are six other states that have passed similar legislation and it has been signed into law and hasn't been challenged constitutionally,” says Representative Deb Shaughnessy, who sponsored one of the bills. “We certainly want to take our time and be deliberative. I want to do this the right way. I believe in sound policy. I want us to have all our ducks in a row and we will certainly do that.” Shaughnessy says that while she's no fan of Roe v. Wade, she's not trying to circumvent the landmark ruling.

Diane Derzis, the owner of the Mississippi clinic, sees it differently. In her view, the spate of anti-abortion laws throughout the country has everything to do with circumventing Roe v. Wade and harassing the doctors who work under it. “If you look at the abortion issue,” Derzis says, “doctors are under attack.”