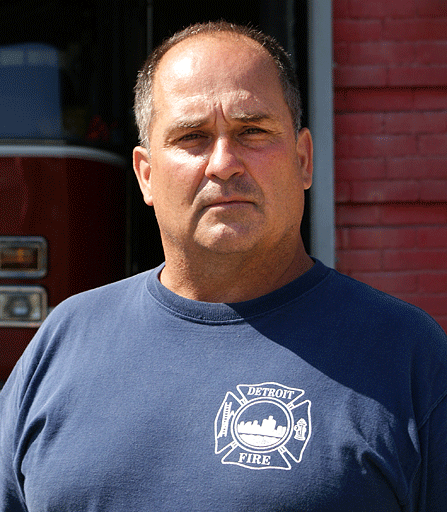 Fire Captain Steve Kirschner is willing to be cross-trained to help respond to medical emergencies, but he worries whether he would be given the proper equipment and training to do so.

DETROIT-- Labor  relations here haven't been rosy since the last time local finances were in good shape. That's been quite a while. But now the Motor City, whose history is more deeply entwined with the modern labor movement than any other city in the country, appears to be headed toward an all-out war with its unions.

At issue is whether the consent agreement Detroit entered into with the state of Michigan in April allows for the legal imposition of new contracts on city unions. Many existing contracts expired June 30, and the city faces a July 16 deadline under its agreement with the state to either negotiate or impose new agreements. The unions are now receiving the contracts the city plans to impose.

The city employee unions are livid and plan to challenge the agreements in court and with the Michigan Employment Relations Commission. “The (city has) a duty to bargain,” says Ed McNeil, negotiator for a coalition of 33 Detroit unions.

McNeil says the unions were betrayed by the mayor's office after it sought their help in fending off state involvement by negotiating deeper concessions. After the unions agreed to the cuts, the state said they didn't go far enough in reining in costs and the deal fell apart. In McNeil's view, the unions stepped up to compromise for the good of the city and were blindsided by a consent agreement that the city and state are now trying to use to privatize city services and strip unions of much of their power.

On June 29, after receiving the contract language the city plans to impose, McNeil sent a letter to Mayor Dave Bing that is full of raw emotion:

“It is unfortunate that there is no credibility in this administration. That is a shame, because people are supposed to have trust in your leadership. There is no faith or hope left for the citizens because this Administration had betrayed the citizens and the community as well. Betrayal of your own people is devastating. Living with yourself has got to be hard, when you look in the mirror every day to see what you have become.”

Most of the details of the new contracts are not yet public, but it is changes to union work rules rather than changes to compensation that are generating the most discussion. In interviews with city and state officials, work rules involving when and how employees can conduct the city's business were cited as a key obstacle to efficient, effective governance. “The work rules around here are absolutely bonkers,” says Naomi Patton, press secretary for Mayor Bing.

The challenge of providing city services with a shrinking workforce to a population that has been shrinking even faster—but is spread across a sprawling 143 square miles–has exacerbated longstanding tensions around these requirements. The budget that went into effect July 1 cut more than 2,500 positions.

City Council President Charles Pugh comes from a union background and considers himself a strong supporter of collective bargaining rights. Still, he faults union work rules for preventing reforms that could save money and improve services across the city. “We've got 30 departments and 42 collective bargaining units,” he says. “That's very difficult to manage through because you have so many people making sure that every work rule is adhered to or you'll be grieved.”

One of the areas where work rules are most troubling to Pugh is the Detroit Police Department, where he believes collective bargaining agreements allow too many trained police officers to focus on tasks like mopping floors and maintaining vehicles that lower-paid civilians should be doing. “You're a 32-year-old, badge-and-gun, sworn-to-protect police officer and you're answering phones and getting coffee for your boss?” he says. “Get out of here. That has to change.”

A 2010 report from the consulting firm McKinsey faulted the department for slow response times and found that less than a third of the city's 3,000 sworn police officers were on patrol. The report cited union resistance and current work rules as a key obstacle to moving more officers to the street.

The Detroit Water and Sewerage Department has to bargain with 23 different unions, sometimes leading to unwieldy processes and systems. When a water main breaks, currently crews of four people have to be sent out to operate the full suite of machinery. Someone from one union drives the truck and then waits around while someone from another union digs a hole and two other people then work on the repair. Then the hole-digger fills the hole in and the driver drives the crew back. A lot of unnecessary waiting around is involved.

Brad Kenoyer, one of the city's water commissioners, says the new contracts will allow the department to collapse job classifications and create a more flexible work environment. Each team will have three crew members instead of four, with a driver who is cross-trained to dig and fill in holes with a backhoe. Instead of using that reduction to lay people off, the department plans to use it to get more crews on the streets and improve service to customers.

Kenoyer says the traditional union atmosphere at the department hasn't encouraged employees to get training that will give them a broader scope. “That has been perceived as a threat to the union structure of preserving just the sheer number of jobs as opposed to high-quality jobs,” he says.

Similar situations confront Brad Dick, director of the General Services Department, as he struggles to manage a department that has gone from 676 employees to just under 300 during the past three years. He often gets complaints from citizens who drive by and see three employees working at a park and one just sitting in a truck. That person is a higher-paid driver with a commercial license and according to work rules, isn't supposed to be doing anything other than driving. “To me that is one of the things in work rules that I wish we did not have, but it's been there, enshrined, for how many years I don't know,” he says. “All my supervisors hate that rule because it's one less person that is physically working.” A recent compromise now allows the driver to clean 10 feet around the truck.

Another perennial subject of work rule discussions in Detroit is whether firefighters and emergency medical services personnel can be cross-trained, as is now common in many cities. Fire Captain Steve Kirschner, a former union vice president and a 35-year veteran of the department, says the reason the change hasn't taken hold has less to do with the idea itself than with related fears about having the resources employees need to do their jobs well.

Kirschner doesn't have a lot of faith in training to take on new responsibilities because of his firehouse's experience with current responsibilities. He says the city has failed to provide firefighters with basic necessities, so they've had to pitch in their own money and raise funds through a soda machine for equipment like flashlights, cleaning solvent and a first-aid kit.

Kirschner is worried about what would happen if they weren't properly trained or prepared but were thrown into the medical emergency fray just to help improve the department's response times. “You have to train us to first responder level so that we know what we're doing when we respond to a scene,” he says. “And you'll have to guarantee that we have the supplies and equipment to service the people when we get there.  If you don't, and our people get there without the proper supplies and equipment, our people are going to be getting in fights because we can't service some person's mother who is dying because we don't have the equipment or the training to help her.”

It the city were to guarantee proper and equipment and training, Kirschner says it wouldn't be a difficult sell. “You would see this fire department vote to do it,” he says. “I'd almost guarantee you that."