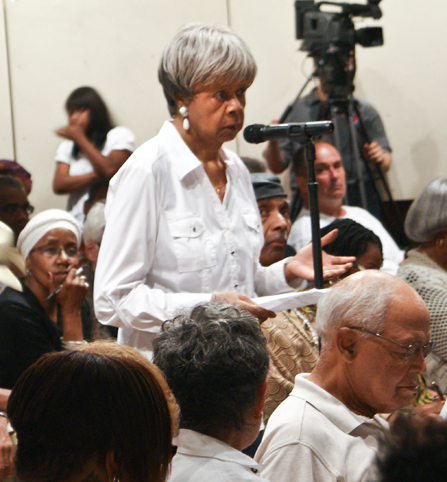 Detroit resident Zeline Richard, 85, voices opposition to the state's involvement in the city's affairs during a recent city council meeting.

DETROIT — The state of Michigan and the city of Detroit hammered out a consent agreement in April that was intended to function as a sort of grand bargain. The idea was that the agreement would allow the financially beleaguered city to keep making payroll in the short term and chart a mutually agreeable path forward in the long term that would involve a better quality of life for the city's residents. At a minimum, a world in which police come when called, garbage gets picked up and street lights work.

The April bargain between Governor Rick Snyder, Mayor Dave Bing and the city council allowed Detroit to stave off appointment of a state-appointed emergency manager, which neither side wanted. But the 2011 law on which the bargain was based still allows for more powerful state intervention into Detroit's affairs than any comparable law in any other state in the country. In some cases, it permits the imposition of labor contracts on unions that haven't agreed to them.

And the bargaining is just beginning. Merely getting the agreement signed and approved required bringing the city to the brink of fiscal disaster. But figuring out how the city and the state can work together under the complex framework for shared governance that the agreement laid out has presented a whole new set of challenges and questions, many that will require state legislative approval and funding.

Emergency funding from the state will be an issue for Detroit far into the future. “We've made it clear that we're interested in working with the city and addressing not only the financial crisis but stabilizing the services that city residents pay for and expect,” says Terry Stanton, a spokesman for the Michigan Department of Treasury, which oversees the state's program for distressed localities. “This is not a two- to three-month issue. This is something that is going to take some time. It's going to take everyone pulling in the same direction.”

None of the problems Detroit is facing will be solved easily. The city has $12 billion in combined debt and unfunded long term obligations and a dwindling population of only 713,000, having shrunk by 25 percent between 2000 and 2010. City services must be provided across a sprawling, 143 square mile landmass so sparsely populated in some neighborhoods that they cannot accurately be called neighborhoods. Some residents live on blocks where there are no neighbors to be found, only dilapidated structures and vacant lots.

City Council President Charles Pugh supported the April bargain, which passed by a 5-4 vote, because it allows the mayor to still be the mayor and the city council to still be the city council—preserving some semblance of democratic governance—while providing strong state-managed enforcement mechanisms to facilitate big changes. “I have no problem with that because as a citizen, I want that to get done, too,” he says.

The bargain was far more palatable to Pugh and other city council members who supported it than an emergency manager would have been. They believe bringing in a manager would have disenfranchised voters and sent the wrong message. Instead, says Pugh, the consent agreement “says that there are people in the city that are capable of handling the fiscal and operational business of the city, that it's just not a whole city full of incompetents who don't know the public's priorities and who aren't ethical.”

The first major bump in the road for the consent agreement had more to do with the past than with the future. In June, the city's lead attorney, Krystal Crittendon, filed a lawsuit questioning the legality of the consent agreement under a state law that prohibits municipalities from entering into agreements with debtors. Many in Detroit believe the state owes the city money and should not be trusted to keep future promises for that reason.

The state irked many city officials by threatening to withhold revenue sharing payments and prevent the city from making a bond payment unless the lawsuit was dropped. The standoff ended when the lawsuit was thrown out by the Ingham County Circuit Court, but not before the ratings agency Fitch further downgraded the city's credit rating. The issue continues to cloud the city's relationship with the state because Crittendon has not yet indicated whether she will appeal.

The old wounds the lawsuit reopened run deep and go to the core of why the consent agreement and the possibility of an emergency manager don't sit well with many Detroiters. At a city council meeting just after the standoff ended in which the community was invited to weigh in, Crittendon received support from many in attendance. “You all need to stick to your guns and ask why they got to hire somebody to do your jobs," one resident told the council. The state's involvement in overwhelmingly black Detroit was viewed as a setback to civil rights by some who spoke up, and was painted in bluntly antagonistic terms. “If Governor Snyder wants to be mayor of Detroit, he needs to resign his position and just try," another citizen said. “He hates the city of Detroit, no respect for us,” said still another.

The most significant debt that Crittendon alleges the state owes dates all the way back to the last grand bargain between the city and state, which was brokered in 1998 by former Governor John Engler and former Mayor Dennis Archer. Under that agreement, the city agreed to roll back income taxes until it had gone from a voter-approved level of 3 percent to 2 percent, in exchange for guaranteed levels of $333.9 million in revenue sharing payments, with a formula for deductions if there was a drop in state sales tax revenues. From 1999 to 2002, Detroit was locked in at a $333.9 while the rest of the state was enjoying robust increases.

But then in 2003, when the state's economy tanked, the legislature included Detroit in sweeping cuts to revenue sharing without allowing it to revert to its higher income tax rate. The total of previously agreed-upon revenue sharing denied to the city is $220 million. “Basically what the state told the city was this: In good times, you won't enjoy any of the state gain, but in bad times, you're going to be the first in line to take some of the pain,” says Ken Cole, the city's lobbyist in Lansing.

Cole says he understands that these decisions weren't made by the folks currently in office: It wasn't their handshake. Still, it colors the debate over the consent agreement and its racially charged undertones. “Sometimes the message, if you're not careful, is that ‘those people,' they don't have the acumen, the intellectual dexterity to manage their affairs,” he says. “But they won't give any deference to the fact that the state's reneging on some its financial commitments to the city of Detroit, it might have played a role in the city's finances getting to where they are at.”

“It becomes very disingenuous from a Detroiter's perspective when someone comes in and says, ‘you know what, I want to partner with you.'"

The current consent agreement includes a “city operational reform program” that the state and the city have agreed to partner together to tackle. The list includes topics like “public safety initiatives,” “Lighting Department changes,” “demolition of structures,” and “real estate management.”

While few would argue that the city couldn't benefit from better public safety or demolishing its thousands of vacant structures, some worry that the lack of detail included in the consent agreement and the lack of funding appropriated. “Because there were no real details, what often happens is I'm thinking one thing, you're thinking something else,” says Brad Dick, director of Detroit's General Services Department. “That's what I believe is happening with some of it, with some of the specific departments and some of the specific issues that we're going to work on."

Karla Henderson, the city's group executive for planning and evaluation, says the state and the city have begun hashing out some of the details required to tackle the list of projects. Demolishing structures is a priority because of the crime and safety hazards that accompany vacant buildings, but it is expensive and requires 36 steps, all of them necessary because of state and federal regulations. “It's not as simple as just coming in and saying ‘I'm going to tear this down,'" Henderson says. “We've had to explain some of that to some of our partners at the state."

The governor's office and the mayor's office have also begun working together on the “Lighting Department changes” but have hit an unexpected bump in the legislature, a sign of what they may be up against with other initiatives.

Some believe that the legislation is encountering roadblocks not because of the specifics but because it is about Detroit, period. “There are certain legislators who don't want to do anything targeted to Detroit, because they are in the camp that Detroit should just resolve it or, why even bother?” says Sean Mann, a Detroit resident who is a program coordinator at the Michigan Municipal League.

The three-bill package that would allow the city to create a new lighting authority with some financial and structural independence from city government has stalled in the state legislature. The package requires no new funding from the state but moves utility tax revenue from the police department to the new lighting authority and stalls a scheduled roll-back of the city income tax to replace the police funding.

With that money, the new authority is expected to oversee 46,000 street lights where 88,000 previously existed.  The lighting legislation is important to the city and its partnership with the state both practically and symbolically. “It's important just to help the city get illuminated,” says Cole, the city lobbyist. “From a symbolic standpoint I think the lighting piece is important because they don't want to strike out. They need a victory. They need something that is tangible evidence for the citizenry that you know  we can do this, we can partner, we can come together, work together and put out a good product, good services for the city of Detroit.”

Cole, who is pushing the legislation in Lansing, believes that the timing of the legislative debate amid the lawsuit brought by Crittendon didn't help. “The fact that she brought the lawsuit, period, I think it caused a number of Republican lawmakers to bristle, to posture that, 'Well, why am I going to move this package which has the potential to help the city?' if, in their mind-set, the city's not willing to help itself?”