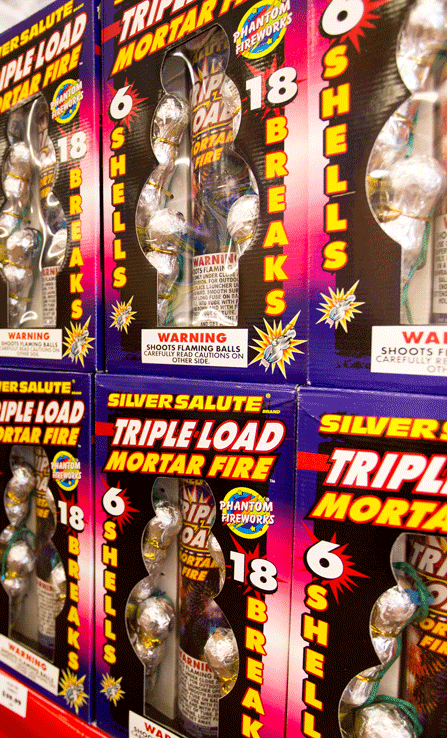 Fireworks in a store in Michigan, available to consumers legally for the first time this year. (AP Photo/The Flint Journal, Brett Carlsen)

Over the course of 14 years as Maine's state fire marshal, John Dean grew accustomed to legislative debates about whether the state should ditch its longstanding ban on consumer fireworks. Every time he was called to share his perspective as the state's chief firefighter, he strongly cautioned against making fireworks available for the general public to purchase and set off.

Dean doesn't have a problem with fireworks, but he does have a problem with the fires and injuries they can cause if proper safety precautions aren't taken. "There are more professional fireworks shows going on around the state than there ever were,” says Dean, a former president of the National Association of State Fire Marshals. “I am a big fan of fireworks. But they are much more impressive and they are much safer when handled by professionals."

This will be the first Fourth of July that consumers in Maine will be allowed to conduct their own fireworks displays, and Dean, now retired, worries that it will be chaos, a blitz of fireworks-related accidents.

Maine legalized consumer fireworks last year without calling Dean in for his usual lecture on the dangers. In fact, Governor Paul LePage, who supported the law, explicitly forbade him or anyone else in the fire marshal's office from weighing in on the issue in the legislature.  “People are just chasing the money,” says Dean, “There's something like 1,100 percent profit in these things. They tried to sell this as a jobs bill.”

States have been allowing more and bigger fireworks so that they don't have to worry about their citizens making their Fourth of July purchases elsewhere. Some 46 states now allow at least some types of consumer fireworks. According to the American Pyrotechnics Association, a trade organization, the consumer fireworks industry brought in $649 million last year, up from $284 million in 1998.

Michigan is celebrating its first Fourth of July with far more powerful fireworks available for purchase. Kentucky, Utah and New Hampshire loosened their restrictions in 2011 to allow stronger fireworks, while Rhode Island and Arizona allowed sparklers and small, ground-based fireworks for the first time in 2010.

Proponents of the changes argue that laws do little to protect their citizens from the dangers of fireworks and merely push them to make purchases in states with more liberal laws. In years past, fireworks superstores did good business in Indiana and New Hampshire by catering to would-be pyros from Michigan and Maine. “States are tired of seeing their tax revenues cross state lines,” says Julie Heckman, executive director of the American Pyrotechnics Association. Heckman argues that advances in technology have made fireworks far safer than they used to be and that education rather than prohibition is the best way to prevent injuries.

But the drought and fire conditions that many areas of the country are experiencing heighten the potential dangers, leading some jurisdictions to put temporary bans in place and cancel community fireworks shows. “The risk is huge,” says Jim Narva, executive director of the National Association of State Fire Marshals. “Out west it really is a tinderbox. We all need to make sacrifices to make sure that our safety is preserved.” Colorado Governor John Hickenlooper has issued a statewide ban on consumer fireworks, as have many counties in states affected by the droughts.

In Indiana, which is experiencing drought conditions in some parts of the state, the fireworks industry is pushing back against county emergency bans on fireworks because it believes they are in violation of state law. A 2006 Indiana law makes fireworks legal from June 29 to July 9 in all parts of the state, regardless of local bans. Similarly, Michigan's new law makes fireworks legal throughout the state on federal holidays and the days preceding and following them.

State Representative Harold Haugh, sponsor of the Michigan legislation, says the state's new law is expected to bring in $14-$18 million in revenue, utilize 100 previously vacant buildings and employ 200-300 people. Early indications are that the law is working as intended. "Many of the suppliers are indicating they are running short on stock because the demand was so overwhelming,” he says.

The state revenue will come from licensing fees, sales tax and a 6 percent safety fee to support firefighter training. Fireworks stores are required to carry $10 million in liability insurance.

In Minnesota, Governor Mark Dayton vetoed a similar bill in April that would have eased restrictions on fireworks. According to local news reports, he called the veto “probably the toughest decision I have had to make.” In his veto letter, Dayton cited an increase in fireworks-related injuries and property damage since Minnesota allowed sparklers and small fireworks in 2002. “Most Minnesotans are responsible enough to ignite and explode those inherently dangerous devices properly and safely,” he wrote. “Unfortunately, some are not.”

Minnesota state Representative John Kriesel, sponsor of the Minnesota bill, says the governor's rationale is short-sighted. “There are always going to be knuckleheads in whatever you do,” he says. "They act like no one is using fireworks now. They already have to deal with the calls and the danger but the state doesn't get any benefit or any tax revenue."

Kriesel says in the past he has travelled to Wisconsin with his kids to buy fireworks and been overwhelmed by all the Minnesota license plates at the stores set up near the border. “They go to Wisconsin,” he says, “and spend $4,000-$5,000 on fireworks and go about their merry way. It's one of our traditions in America that is so awesome. It's part of our fabric and it's annoying when people want to put out that tradition.”