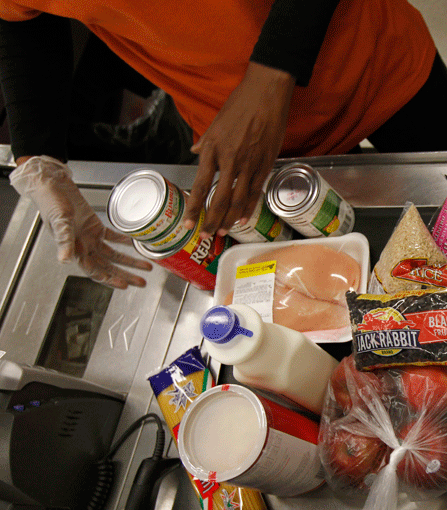 Purchases that symbolize the average weekly food stamp benefit of five dollars a day are scanned, in a 2012 file photo. (AP Photo/Matt Rourke)

The number of people receiving food stamps hit a record high during the recent recession and remains high. But that has not been the case for welfare. In some states, welfare participation rates have actually decreased over the past few years.

Equally surprising is the fact that less than one-third of the federal and state money currently spent on welfare is actually given to people as cash assistance. The rest is spent on specialized services such as child care, child welfare and teen pregnancy counseling, but the government really doesn't know how these funds are used and who benefits.

“We've been particularly concerned about a small, but possibly growing portion of families that were eligible for [welfare benefits] … and did not receive cash benefits,” Kay Brown, director of income security for the U.S. Government Accountability Office, the watchdog organization of Congress, told a U.S. Senate panel earlier this summer.

It's clear that the recession tested the nation's safety net in unprecedented ways, but states, researchers and policymakers in Washington, D.C., are still trying to figure out the true impact and what changes, if any, should be made to improve the patchwork of programs designed to help the poor and unemployed weather bad times.

Welfare caseloads actually have been going down in six states. The biggest drop was in Rhode Island, which saw a 29 percent decline, according to the Center on Budget and Policy Priorities (CBPP), a liberal think tank. That is striking, since Rhode Island's peak unemployment rate hit 12.7 percent, the third highest in the nation. The reason for the sharp drop in welfare in Rhode Island is that the state both shortened its time limit for receiving benefits  and began cutting off entire families, rather than just the parents, when the time limit was reached, the group says.

The other states that experienced decreases in their welfare rolls during the recession were Georgia, Indiana, Missouri, North Dakota and Texas, CBPP data show. These states all saw double-digit increases in food stamp participation during that time.

Advocates say that food stamps worked as they were supposed to during the recession: their use grew substantially. The fact that welfare caseloads dropped at all convinced some scholars that the welfare system is ill-designed for hard economic times. “[Welfare] is the outlier in its lack of responsiveness,” says LaDonna Pavetti, who specializes in poverty and welfare for CBPP.

The most important answer to the question of why national welfare rolls didn't increase with food stamps is that the program is a now a block grant to the states with a fixed amount of money set aside. When Congress overhauled welfare in 1996, it changed the system from an entitlement program guaranteeing coverage for everyone who was eligible to a Temporary Assistance for Needy Families (TANF) block grant. TANF hands out lump-sum payments for welfare that states can use as they wish. The amount has stayed level since 1996, at about $16.5 billion a year.

Food stamps, however, are open-ended. If individuals qualify for the program, they get the benefit, and as a result, costs have soared. The federal government, for example, spent nearly $76 billion on food stamps in 2011, more than double the $33 billion spent before the recession.

The issue of work is handled very differently among the safety net programs.  The welfare program requires that 50 percent of a state's families be involved in work activities. In recent years Congress tightened up those requirements by narrowing the kinds of activities that can count as work. Under the food stamp program, most adults have to register for work, accept suitable employment, and take part in an employment and training program to which they are referred by the food stamp office.

Jessica Bartholow, a legislative advocate with the Western Center on Law and Poverty in Sacramento, says the TANF work rules are too rigid. “A low-income parent was held to the same work rules during the worst economic downturn of our lifetimes as they were when unemployment was single digit,” she says.

She also worries about TANF's lifetime limits, which food stamps do not have. In most states, the lifetime limit for welfare is five years, but several states have shortened it. California and Michigan reduced their welfare time limits to four years. Arizona reduced its limit to two years.

Many Republicans don't see welfare as broken, but instead as a model, especially for the food stamp program.

During recent debate on a farm bill on Capitol Hill, the Senate rejected a measure from Republican Senator Rand Paul of Kentucky that would have capped food stamp funding at $45 billion a year and replaced the program with block grants to the states. “It's out of control. It's not about helping those in need,” Paul said. “It's about being wise with the taxpayer dollars and not giving people $20,000 a year in food stamps.”

The House Republican budget blueprint released earlier this year by Representative Paul Ryan of Wisconsin likewise would have turned the food stamp program into a block grant and required recipients to work or enroll in job training. Democrats and liberal groups say proposals like these would increase hunger, destroy jobs and slow the economic recovery in the interest of saving money.

Ron Haskins, co-director of the Brookings Institution's Center on Children and Families, estimates that between states and the federal government, an estimated $1 trillion was spent in 2011 on the 10 largest poverty programs, including welfare and food stamps.

“The idea that we're not spending enough money is probably incorrect,” Haskin told a congressional panel last month. “We could be spending it poorly. It might not be focused on the poor. Some of the programs might be unsuccessful, but we're spending a lot of money, about $13,000 per poor person,” says Haskins, who worked on Capitol Hill and was involved in rewriting the welfare rules in the 1990s.

Tad DeHaven, a budget analyst at the libertarian Cato Institute, says the focus should be more on food stamps and other programs and less on TANF, because that's where the money is spent and continues to be spent.

Welfare is not a big budget item for most states, taking up less than 2 percent of all state spending, according to the National Association of State Budget Officers (NASBO). But a growing concern is that no one really knows how the state and federal TANF money is being spent. GAO figures that 71 percent of the total spent in 2011 was for purposes other than cash assistance.