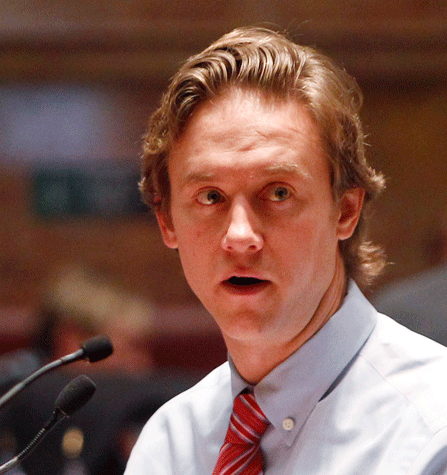 Ferguson upset Della in the Democratic primary and went on to win the general election, making him only the second Teach for America alumnus to secure a seat in a state legislature—following Mike Johnston, who joined the Colorado Senate in 2009.

Johnston and Ferguson aren't likely to be alone for long: At least six TFA alumni are running for state legislatures this year, and many others are running for boards of education. Like Ferguson and Johnston, most of these former teachers likely will have to overcome union opposition to win.

The recent college graduates who are accepted into Teach for America are placed in underperforming schools across the country. The organization says that 60 percent of the teachers stay in education beyond their initial two-year commitment. Nevertheless, many of them emerge from their experience frustrated by union-supported protections that restrict how teachers are hired, fired and evaluated. In Colorado, Johnston's signature legislative achievement was a measure making teachers and principals more accountable for their students' performance. The law, which also makes it easier to fire ineffective teachers, has been a model for similar legislation across the country.

Spokesmen for the country's two largest teachers' unions, the National Education Association and the American Federation of Teachers, say that TFA candidates aren't on the radar screen nationally, but state and local unions have been active in opposing them. Speaking before heated elections for control of the state's Board of Elementary and Secondary Education this fall, the president of the Louisiana Association of Educators, Joyce Haynes, said that TFA is part of what she described as the “charter agenda.”

“We're in a battle to save public education,” she said. “They've changed the face of New Orleans into the face of Teach for America.” The most hotly contested board race involved Kira Orange Jones, executive director of TFA's Greater New Orleans Region, who defeated an incumbent backed by teachers unions. Her victory helped secure a majority on the board in favor of Governor Bobby Jindal's pick for State Superintendent of Education, John White, himself a TFA alumnus.

The divide between TFA and teachers unions might already have cost one TFA candidate his race this year. Though he insists the race isn't over yet, Democrat Brian Johnson, a TFA alumnus who used to head the organization's Los Angeles region, currently sits 31 votes shy of second place with nearly all of the votes counted in his primary for the state Assembly. Under California's new primary system the top two vote-getters qualify for the November ballot. Johnson was backed by groups such as Democrats for Education Reform and StudentsFirst, which was founded by TFA alum and former Washington, D.C. schools chief Michelle Rhee, but faced opposition from the California Teachers Association.

The two sides spent more than $1.8 million during the primary, and the race set off an intra-party dispute: The director of the Los Angeles County Democratic Party sent a cease-and-desist letter to Democrats for Education Reform, demanding that it remove the word “Democrats” from its name.

Johnson says he was surprised by the letter but not by the fierce opposition he faced. He acknowledges that his current position as the head of a network of charter schools didn't help.

“Defenders of the status quo will do anything they can to prevent meaningful reform,” he says. Johnson says his top education priorities were introducing student performance and more feedback into the teacher evaluation system and improving the quality and diversity of traditional public schools. He raised more than $400,000 from donors including New York City Mayor Michael Bloomberg, Netflix Founder Reed Hastings and filmmaker Roland Emmerich.

Even after winning their seats, Johnston and Ferguson have faced union opposition. NEA president Dennis Van Roekel flew to Colorado to testify against Johnston's teacher evaluations bill and it was opposed by the Colorado Education Association, though it won support of the state branch of the AFT.

Ferguson hasn't had much success pushing legislation opposed by unions. Bills he introduced that would make it easier to fire less effective teachers and end the practice of automatically firing the newest teachers first failed, as did other measures to give charter schools more freedom and parents in failing schools more options. “State politics are hardball politics,” Ferguson says. “It has been a very, very eye-opening experience.”

Still, the teaching organization, which grew out of founder Wendy Kopp's 1989 senior thesis at Princeton University, has had a major impact in a number of other states, particularly on the policy side. In addition to Louisiana's White, the top education official in Tennessee, Kevin Huffman, also participated in the program. In other states, such as Indiana, alumni hold key policy positions in state departments of education.

“You just never know where TFA alums are going to turn up,” U.S. Secretary of Education Arne Duncan said recently, speaking at the gala for TFA's DC Region. He recounted a week in which he'd spoken with Louisiana's White, met with the head of the Internal Revenue Service, TFA co-founder Doug Shulman, and visited numerous teachers and principals who had been through or were currently in the program. “I keep trying to escape you,” he joked. “I can't seem to do it.”

Teach for America would like to encourage even more of its alumni to enter education policymaking. In 2008 it created a spin-off organization called Leadership for Educational Equity to develop leaders and get TFA alumni more civically engaged. It provides training and personalized coaching for candidates up to the legal limits for in-kind contributions, at no charge to the candidate.

The program is open to all interested Teach for America alumni or staff, regardless of their political persuasion or thoughts about how to improve education. “We don't have a litmus test,” says Mike Buman, the organization's executive director.

While improving education is a top priority for most current TFA candidates, their views differ widely on how best to solve the problem. Rob Bryan, a Republican running for the North Carolina House, says his time in the program convinced him that teacher tenure, and unions, are part of the problem. “Everything was about perpetuating the status quo,” he says. “I had a teacher come to tell me, it doesn't look good for you to stay late.” He'd like to see more flexibility for schools and parents and more alternatives to traditional public schools, such as charter schools or vouchers.

But Jeremy Ly, running for the Illinois House, says his experience teaching in a charter school with high teacher turnover underscored that more alternatives aren't necessarily the answer. He takes pride in having helped start the first union for charter school teachers in Chicago. Ly says his background would help him bring together teachers unions and those, like Bryan, who see unions as part of the problem. “I know the language of both and I can sit down with both.”

The organization has also created political and policy fellowships for current and former TFA alums. “In a lot of places, the only way to get a job is if you've had some experience,” Buman says. “We try to have a set of supports to help them get where they'd like to go.” Both Johnston and Ferguson have taken on fellows.

TFA provides some of the funding for some of the civic engagement activities, but the group does its own fundraising for political activities. While Buman didn't disclose who provides financial backing for their political activities, saying he hadn't yet asked donors whether they were comfortable disclosing their support, he says it's not “the usual suspects of education reform funding.”

Buman says the organization, which currently employs 15 people, will expand or contract according to demand from the TFA alumni community. But as the teaching program continues to expand in size – its incoming class will top 10,000 next year, thanks in part to a $50 million grant from the U.S. Department of Education – education experts expect its influence to increase dramatically.

“What we're seeing now is the front-edge of the TFA bubble,” says Rick Hess, education policy director at the free-market American Enterprise Institute. “Five, ten years out, we're going to be talking about hundreds of TFA candidates in all likelihood.”

Ferguson thinks that many of those candidates will experience the same “knee-jerk reaction to Teach for America” he faced if the organization doesn't work to improve its relationship with unions. “It's something that Teach for America has to address,” he says. “There are too many factions in public education right now.”