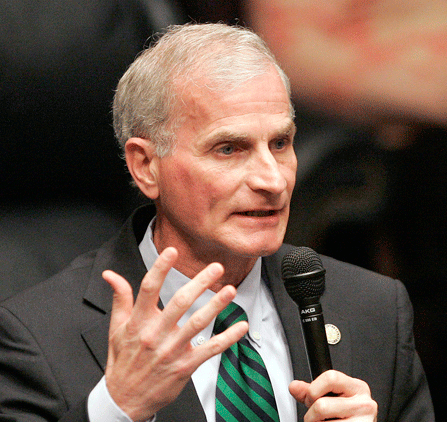 Mike Fasano is still haunted by a vote he cast in the Florida Senate more than five years ago — even though the measure he voted for was widely popular on both sides of the aisle.

In 2006, Fasano was part of a nearly unanimous majority that passed the Florida Energy Act, a comprehensive plan to increase fuel diversity and add more power to the state's overtaxed electric grid.

But for the past three years, the Republican legislator has fought an uphill battle to repeal part of that law. It's not the tax credits for renewable energy sources, such as solar power, that Fasano objects to. Nor is it the money the state put toward research on clean energy technology.

Fasano's regrets stem from a provision in the law that allows utility companies to charge ratepayers for the costs of planning and developing nuclear plants — before reactors go online, and even if they are never finished.

In 2006, Florida legislators thought incentivizing nuclear power made sense. After President George W. Bush signed the 2005 Energy Policy Act, guaranteeing federal loans for new nuclear plants, policymakers in and outside Florida  pushed for revival of an industry that had been dormant for decades.

But since then, a shift in economics has prompted more experts — including longtime proponents of the industry — to question the prudence of new large-scale nuclear power.

In Florida, cost estimates have soared and construction deadlines have been pushed back on a major nuclear project that the public is already paying for. Fasano and a small but growing group of legislators are hoping to change the 2006 law amid worry that the plant will never be built. First, those efforts came through legislation.  Now they are manifested in a legal challenge that is being heard by the Florida Supreme Court.

“We all realized what was in this bill,” Fasano told Stateline. “We did the wrong thing.”

As Fasano and his fellow legislators prepare for court proceedings this fall, they are advising lawmakers in other states not to follow Florida's example. In Iowa and Missouri, where nuclear incentive measures have been hotly debated in recent sessions, Fasano has submitted guest editorials to local newspapers stating his opposition to them.

In 2006, nearly all Florida legislators saw things differently. The state's growing populace needed a steady energy supply, and in a nation increasingly carbon-conscious, with questions about whether the federal government would put caps on power plant carbon emissions, nuclear power loomed as a no-emissions contributor to the grid. In Florida, a state largely dependent on just one energy source — price-volatile natural gas — fuel diversity was a popular buzz phrase.

But new nuclear power plants have been historically risky ventures, costing billions of dollars and often taking decades to build. So an amendment was added to the Florida Energy Act that incentivized construction by using cost recovery charges to reduce the financial risk for utilities and their shareholders to almost zero. The law allows utilities to raise rates, with the approval of the Florida Public Service Commission, to cover licensing and servicing costs before construction even starts.

In theory, this saves ratepayers money over the long haul — if the reactors make it online. With up-front financing, utilities cut down on interest costs that accumulate during the years-long scope of projects.  But if a project is abandoned part way through construction, ratepayers remain on the hook, and the power company gets repaid for millions of dollars in expenses.

That's what critics such as Fasano fear will happen in Florida. Progress Energy Florida, a major utility, quickly took advantage of the pay-as-you-go law after it passed. The company has slogged through its plans to build a nuclear complex in Levy County, plagued by difficulties in securing outside funding. The company originally set a 2016 deadline for completion, but since then has pushed back that estimate to 2024.

Meanwhile, its cost estimates have soared, from an initial $5 billion to more than $24 billion, and the average resident is paying an additional $3.45 extra each month to cover the expense, while energy-intensive businesses are paying more. Thus far, the utility has spent more than $1 billion, which customers must eventually pay back.

If Progress Energy were to immediately cancel the project, it would collect repayment of about $300 million for its efforts, according to an analysis published in May by the Tampa Bay Times. After taxes and payments to bondholders, the amount would be cut in half, the newspaper reported.

“The companies have no risk. It's just green-lighting everything they want,” says Stephen Smith, executive director of the Southern Alliance for Clean Energy. His group opposes the law in Florida and in states that have followed its lead, all of them in the South.

Nine other states have so-called “Construction Work In Progress” (CWIP) laws similar to Florida's, although none are quite as friendly to utilities as the one in Florida is. Two of those states — Georgia and South Carolina — are the sites of planned reactors recently approved by the federal government. A coalition of consumer and environmental groups has recently formed in North Carolina to oppose the cost recovery law there.

Meanwhile, the abundance of low-priced natural gas has further tilted the U.S. energy economy away from nuclear power. “I can't see how any regulatory commission in their right mind would approve a new large-scale nuclear power plant, when we've got this natural gas supply,” says Charles Ebinger, director of the Energy Security Initiative at the Brookings Institution and a longtime proponent of nuclear power. “There's just too much risk at stake to take on these multi-billion dollar plants.”

Richard Myers, vice president for policy development at the Nuclear Energy Institute, says political opposition to the nuclear laws doesn't much concern him. “We don't see a growing movement against state CWIP laws, we see a movement toward it,” he says, referencing the discussions in Iowa and Missouri. Meyers predicts new laws will pass in the coming years.

Proponents of nuclear incentive laws continue to insist that proposed plants will be built and that ratepayers will save in the long run. And though many experts predict that natural gas prices will stay relatively low in the coming decades, nuclear proponents argue that the energy is needed to protect against future price fluctuations.

Incentive laws still could be a tough sell in Iowa, however. Legislators appeared on the verge of enacting industry-friendly legislation in 2011, but the idea lost momentum after the nuclear catastrophe in Japan. The legislature did not pass an incentive law that year, or during the next session. A Des Moines Register poll in February 2012 concluded that 77 percent of Iowans opposed a new nuclear plant, partly because of safety concerns, and partly because of the cost.

In Georgia, ratepayers are each paying $4.26 each month to foot the bill for two new reactors at Georgia Power's Vogtle plant. Construction is about one-third of the way through, says Mark Williams, a Georgia Power spokesman. Williams says the company's projected costs have fallen below a $6.1 billion estimate (though the specifics of the cost are considered trade secrets), and that ratepayers will ultimately save $300 million by paying in advance.

Critics of the project have pointed to recent filings showing a possible $900 million cost overrun, but Georgia Power officials say that amount is being negotiated down with contractors. “This is still the best choice for our customers,” Williams says. “We're confident these units are going to be built.”

Though Fasano has spent three years pitching legislation that would undo the law in Florida, he's made little progress. His next hope is the Florida Supreme Court, where the Southern Alliance for Clean Energy has filed a suit against Progress Energy, Florida Power & Light — another company planning a nuclear expansion — and the state Public Service Commission. The suit claims the law gives the commission too little guidance in implementation, and too much power to approve rate increases.

Ronald Brisé, who chairs the commission, bristles at the thought that the commissioners are ill-equipped to make sound decisions on nuclear power. If prospects for completion of a plant truly appeared dead, he says, “I think there would be great pause by any commissioner to pass off those costs to consumers.”