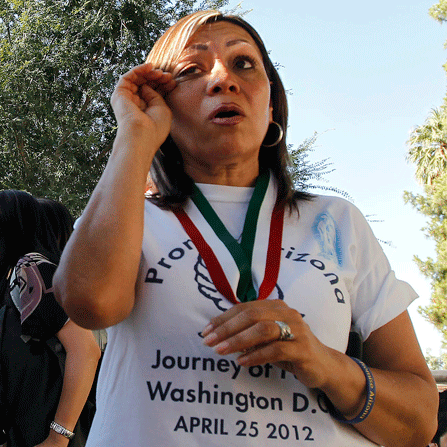 Ruling on Arizona's controversial immigrant crackdown law, SB 1070, the Supreme Court issued a 5-3 decision Monday that identified immigration policy as chiefly a federal responsibility and preempted three key provisions of the law. “Arizona may have understandable frustrations with the problems caused by illegal immigration…,” wrote Justice Anthony Kennedy, “but the State may not pursue policies that undermine federal law.”

While the decision was met with satisfaction by pro-immigrant groups, the court left in place one of the law's most controversial portions, section 2B, which allows law enforcement officers to check a person's immigration status with the federal government during a lawful police stop. During oral argument in April, attorneys for both sides gave drastically different representations of how long a status check could take — Arizona's lawyer Paul Clement argued a check could take as little as 10 minutes while U.S. Solicitor General Donald Verrilli said it could be upwards of an hour.

Because SB 1070 has not gone into effect, Justice Kennedy wrote, there is “a basic uncertainty about what the law means and how it will be enforced.” The majority opinion left the court open to more litigation on the constitutionality of section 2B. The National Immigration Law Center and the American Civil Liberties Union plan to file a new petition for an injunction against section 2B in the next few days.

Monday's ruling left all sides claiming victory. Arizona Governor Jan Brewer called the decision “a victory for the rule of law.” Alabama Governor Robert Bentley and Georgia Governor Nathan Deal, both of whom signed into law bills similar to Arizona's, issued statements saying that the court left the core of Arizona's law intact and affirmed that states can enforce immigration laws.

On the other side, U.S. Attorney General Eric Holder praised “the Supreme Court's decision to strike down major provisions of Arizona's S.B. 1070 on federal preemption grounds.” The Police Executive Research Forum, an organization representing law enforcement in the nation's largest cities, counties and states, was “encouraged” to see the Court “signal a cautious approach to any state legislation that requires local police to take on immigration enforcement roles.” Immigrant advocates such as the American Civil Liberties Union and the National Immigration Law Center, which have filed suits in Arizona and other states with immigration enforcement laws, said they were pleased with the outcome, but vowed to fight on against section 2B.

While the ruling is the most definitive statement yet on state immigration enforcement, not much will change in Arizona immediately. Governor Jan Brewer signed an executive order earlier this month directing law enforcement officers to undergo specific training in how to implement SB 1070 without racial profiling, and in understanding which types of identity documents are acceptable to prove lawful presence. That training will not be completed for at least 30 days. Arizona's peace officer standards and training board is currently reviewing the decision to determine if any new training needs to be implemented.

Currently, five other states have immigration enforcement laws in various stages of legal challenge. While all five laws share a similar intent, each law has different provisions.

For instance, Indiana and Georgia prohibit foreign nationals from using consular ID cards as valid forms of identification. Alabama criminalizes contracts or business transactions conducted with undocumented people and requires school officials to determine the immigration status of their students. Georgia and South Carolina prohibit knowingly doing anything to aid someone in the U.S. illegally.

These provisions and others are currently involved in multiple lawsuits in federal court, challenged by the U.S. Department of Justice and various civil rights groups. It is likely that the judges in those cases will call for new briefs in light of the Arizona ruling; they could also call for new oral arguments.

As states take note of the ruling and its effects on their policies, Sheri Steisel, senior federal affairs counsel at the National Conference of State Legislatures, notes that Arizona's legislation stems in part from the federal government's failure to act in the immigration policy arena. Regardless of their ideological stance, says Steisel, legislators' “shared frustration is with the federal government's failure to act on immigration reform. The federal government has left states with the costs and consequences of a lack of federal policymaking in this area…The reason why we have states acting in this area is because Congress has not.”

Section 3 of Arizona's law created a new state crime of failing to carry an alien registration document to prove legal status. The majority found that federal law preempts this provision because Congress has “left no room for states to regulate” this area, given that it has created a comprehensive federal registration scheme. Alabama and South Carolina have similar provisions in their immigration enforcement laws.

Section 5C of Arizona's law made it a separate state crime for an illegal immigrant to seek or perform work. Justice Kennedy ruled that this provision conflicts with federal regulatory law because in the Immigration Reform and Control Act of 1986, Congress decided it would be inappropriate to impose criminal penalties on immigrants seeking work and instead placed criminal responsibility on the employer. The new state crime, Kennedy wrote, “is an obstacle to the regulatory system Congress chose.” Alabama and South Carolina both have this provision in their immigration enforcement laws.

Section 6 of the law authorizes state and local officers to arrest, without a warrant, anyone they believe has committed a public offense that makes them removable from the United States. Kennedy wrote that this provision gives local officers greater arrest authority in enforcing immigration law than Congress intended, and creates another “obstacle to federal law.” Indiana has this provision in its law.

The justices in the majority voted to uphold Section 2B of the law. Referred to as the “show me your papers” provision, this allows local law enforcement officers to check the immigration status of a suspect they have probable cause to detain. The judges were concerned with the potential for illegal searches, but agreed that section 2B is not on its face preempted by federal law. However, Kennedy was careful to note that because the law has not yet been implemented, “this opinion does not foreclose other preemption and Constitutional challenges to the law as interpreted and applied after it goes into effect.” Alabama, Georgia, Utah and South Carolina all have provisions similar to section 2B in their immigration laws.

The justices in the minority, Scalia, Alito and Thomas, each wrote individual dissents. Justice Scalia wrote that the majority's opinion “deprives States of what most would consider the defining characteristic of sovereignty: the power to exclude from the sovereign's territory people who have no right to be there.” He said in announcing his dissent that he would have upheld all parts of Arizona's law. Thomas agreed that the entire law should be upheld, while Alito wrote that section 5C should have been upheld.

Justice Kagan recused herself from the case because she participated in deliberations on it while she was U.S. solicitor general.