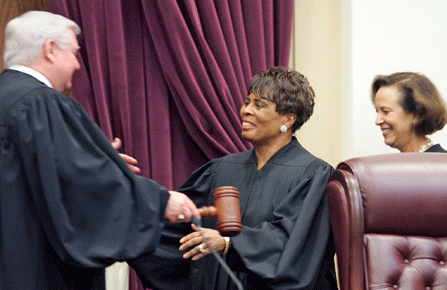 Fred Lewis hands over the gavel to Peggy Quince after being sworn in as Florida's fifty-third chief justice by Barbara Pariente in 2008. All three justices are facing challenges this fall. (AP Photo/Steve Cannon)

Robin Rorapaugh has managed two gubernatorial campaigns and two U.S. Senate races, and she was a senior advisor to Barack Obama in 2008. But she has never been in a campaign quite like the one she's involved in now.

The three candidates Rorapaugh represents this year won't be appearing at fundraisers or speaking at party events. They won't be explaining their policy views or what they plan to do if they win another term. They won't be debating their opponents. In fact, they don't have any opponents.

That's because Rorapaugh's candidates—Fred Lewis, Barbara Pariente and Peggy Quince—are Florida Supreme Court justices. The three judges are facing retention elections, in which voters will decide whether to keep them or replace them with yet-to-be-named appointees. Lewis, Pariente and Quince want to retain their posts, but ethics rules strictly limit how they can campaign. “These are judges,” Rorapaugh says. “They are not politicians.”

In many states, the difference between the two is increasingly blurry. In 2010, judicial retention elections across the country were more competitive and expensive than ever before. The most dramatic example was in Iowa, where voters removed three Supreme Court justices targeted by social conservatives for legalizing gay marriage.

Some worry that taking aim at judges to punish them for controversial rulings will politicize the judiciary—not least because it forces judges to step, however gingerly, into the foreign world of politics. But others welcome the shift as a way to keep otherwise unaccountable judges from ignoring the public will.

In most of the 20 states with judicial retention elections, governors fill judicial vacancies by picking from a list of candidates provided by a commission that is supposed to be insulated from politics. In Florida the Florida Bar, the state's professional lawyers' organization, helps choose the members of the commission. Once appointed, judges on Florida's highest court face a retention vote after their first year on the bench and every six years after that.

The merit-selection and retention system is supposed to be a middle ground between conventional elections and the federal judicial selection system, which lacks any election component. The idea is that legal experts play the primary role in selecting the judges, while the voters provide a measure of public accountability.

Florida adopted merit-selection and retention in 1976, replacing a system in which Supreme Court candidates ran in conventional elections. Scott Hawkins, president of the Florida Bar, says the old system was marred by politics, patronage and scandals. “There used to be a joke in Florida, ‘How do you become a judge? Become a friend of the governor,'” Hawkins says. “That used to be a joke. I don't find it very funny.”

Many supporters argue the system is working as it should, because retention votes only exist to remove judges who are unfit for the job. “You ought to have an opportunity to vote out a judge,” says Stephen Grimes, a former chief justice of the Florida Supreme Court who is defending Lewis, Pariente and Quince, “but not just on a basis that you disagree with one decision or a couple of decisions or you think the judge is a little too liberal or a little too conservative or something like that.”

Competitive retention votes are exceptionally rare—in fact, the vast majority of judges face no organized opposition at all. Before 2010, the most famous example of a hotly contested judicial retention election was in California in 1986, when Chief Justice Rose Bird and two of her colleagues were removed after overturning dozens of death penalty verdicts. “It's probably one of the least active areas of American democracy,” says Charlie Hall, deputy director for public education and communications for Justice at Stake, a group that advocates for impartial courts.

In 2010, however, conservatives organized opposition to Supreme Court justices in several states. In addition to Iowa, they targeted judges in Alaska, Colorado, Kansas and Illinois because of controversial rulings. Ultimately, only the Iowa justices were defeated.

Florida could be the next Iowa. While it hasn't explicitly called for their removal, a group called “Restore Justice” is leading the criticism of Lewis, Pariente and Quince. One of the group's videos, for example, asks, “What if we could shake the establishment to its core and take back the last liberal stronghold?”

The three justices have supported a series of misguided rulings, according to Jesse Phillips, president of Restore Justice. Phillips points to Bush v. Gore, when the recount the Florida Supreme Court ordered was overturned by the U.S. Supreme Court for violating the U.S. Constitution's equal protection clause. He criticizes the judges for their 2000 decision to strike down a death penalty ballot measure voters had overwhelmingly approved two years earlier. And he argues they were wrong to remove from the ballot a constitutional amendment challenging the individual mandate in President Obama's health law. The Florida legislature attempted to put the measure before voters in 2010.

To Phillips, the state's highest court has run roughshod over the voters and the legislative and executive branches of government. “There has been a long history,” Phillips says, “of the Supreme Court not respecting our right to vote.”

But defenders of Lewis, Pariente and Quince argue that all three have led distinguished careers and that the court has a moderate record. They also argue that by casting retention votes as referendums on specific court rulings, groups like Restore Justice are setting a dangerous precedent. Says Barry Richard, a lawyer who helped win approval for Florida's current judicial selection process as a state legislator in the 1970s: “You don't want judges holding their finger in the wind to determine the public sentiment before they make decisions in a case.”

The Perils of Politics

Judges who face contested retention elections have to answer a difficult question: How can they make the case to voters that their opponents are politicizing the courts without becoming immersed in politics themselves?

In 2010, the justices that faced retention votes answered that question in different ways and with different results. The Iowa justices preferred purity, refusing to form campaign committees to raise money and work on their behalf. They lost. In contrast, Thomas Kilbride, the chief justice of the Illinois Supreme Court, raised $2.8 million for his 2010 retention vote, with much of it coming from the Illinois Democratic Party. According to a report by Justice at Stake and the Brennan Center for Justice, that was more than the combined money that every judge in every state raised for every retention elections from 2000 to 2009. Kilbride won.

Some observers see a lesson in those disparate results, including David Wiggins, an Iowa Supreme Court Justice who faces a retention vote this fall and who was also part of the court's unanimous decision legalizing gay marriage. “If someone wants to attack me, I'm not going to let them bully me,” Wiggins told the Des Moines Register in May. “If asked to, I'll speak up for myself. The others didn't do that last time. I will.”

In Florida, judicial ethics rules mean that the justices can't appear at partisan events, personally solicit campaign dollars or speak about their views on prospective cases. Still, it's clear the justices are making the same choice as Wiggins. Despite a $500 individual contribution limit, their campaigns have together raised hundreds of thousands of dollars. The campaigns have mobilized support from some of the heavyweights of Florida politics.

To Phillips, that's hypocrisy. The justices' campaigns have raised far more money so far than their critics, yet his group is the one that's accused of bringing politics into the process.

To the defenders, though, it's a necessary evil. Their view is that much more is on the line in the November retention votes than the careers of Fred Lewis, Barbara Pariente and Peggy Quince and that, as a result, the justices would be remiss if they didn't do everything they possibly could to beat back the challenge. “The stakes are the independence of the judiciary,” Rorapaugh says. “Those are the stakes.”