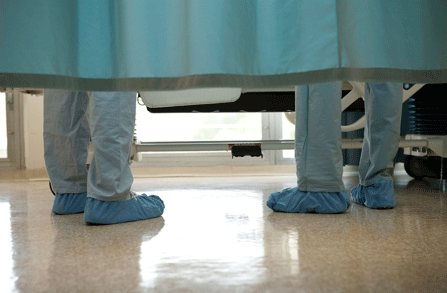 Glenn Prager used to be a Medicare fraud fighter for the federal government. Early this year he switched to Medicaid, taking a job as Arizona's inspector general. His primary task is to keep crooked health care providers out of the state's $9 billion Medicaid system. If they slip in under the wire, he says, the goal is to catch them before any claims are paid.

But six months into his new role, Prager is frustrated that he can't get his hands on the Medicare data he used when he was a federal investigator. “The basic problem,” he says, “is a lack of coordination and communication between the two programs. There's no other way to explain it.”

Prager is not alone in his complaints. The National Association of Medicaid Directors released a report last month calling on the federal government to share Medicare data and improve collaboration with states in their mutual battle to reduce Medicaid fraud and abuse. Congress and the federal Government Accountability Office are also pushing the U.S. Department of Health and Human Services to provide better support for state fraud-busting efforts.

The federal government says it has ambitious projects underway to make Medicare data more useful to states, and to help states share information about their respective Medicaid programs.  The problem, federal officials say, is that Medicare, which provides health coverage for seniors, is organized very differently from Medicaid. And each state organizes its Medicaid program in a different way, making data matches difficult.

While only a small number of the health care providers who participate in either program break the rules for financial gain, the result of the fraud that does take place is a substantial drain on the money available to provide legitimate health care services.  A majority of providers serve both Medicaid and Medicare, and the dishonest ones often steal from both programs at the same time.

The federal government alone lost $22 billion to what it calls “improper payments” in the Medicaid program last year. Although no uniform method of calculating state losses exists, a similar amount was likely lost by states since they pay for about half of the program. Medicare lost $43 billion, according to federal data.

Fraud can take a variety of forms, among them billing for services that were never provided, double-billing Medicaid and Medicare for the same services, and falsifying credentials and diagnoses.

As fraudsters' schemes grow bigger and more elaborate, state Medicaid agencies are forced to create equally elaborate schemes to thwart them. What's missing from their arsenal is the ability to cross-check Medicaid provider and claims data with Medicare data.

Since most doctors, pharmacists, dentists, medical suppliers and other providers who participate in Medicaid also serve Medicare patients, it makes sense that background checks and other information on the providers should be shared. At a minimum, Prager says, states should have access to current information on providers who are under investigation or who have already been kicked out of Medicare.  It doesn't make sense, he says, for both states and the federal government to run background checks on the same providers.

In fact, new federal health law rules rely on the ability of states to cross- check their lists of Medicaid providers with Medicare's provider rolls. In mandating states to crack down on potential scofflaws, the Affordable Care Act requires them to terminate any health care provider who has been terminated by Medicare or another state Medicaid program.

But that's hard to do if Medicare data available to states is incomplete, out of date and difficult, if not impossible, to marry with Medicaid data. In addition, use of federal data is governed by a variety of data usage agreements that bar states from using the information for certain purposes.

For example, state Medicaid officials can check Medicare claims data to determine whether patients eligible for both programs are receiving adequate care. But if the data reveals potentially fraudulent claims, it may not be allowed as evidence.

At a congressional hearing on the issue last week, Senator Tom Carper, a Delaware Democrat, noted that the federal government — under pressure from Congress — had recently updated a list of 800,000 Medicare doctors by eliminating more than 20,000 who were deceased, were out of business, or had lost their licenses. Federal officials must “revalidate” the entire list of 1.5 million Medicare providers by 2015 under the federal health law.

Although long overdue, Carper said, the recent data purge should alleviate “the glaring problem of dead doctors who still manage to charge us for care they provide to patients alive and dead.”  He was referring to a growing form of fraud involving physician identity theft in which fraudsters file fictitious Medicare and Medicaid claims under the names of deceased physicians.

But the problem goes beyond keeping known lawbreakers off the payroll. States say they need Medicare data to get a full picture of the care received by elders and adults with disabilities who are enrolled in both programs, the so-called “dual eligibles.” Claims involving dual eligibles, which represent a majority of Medicaid spending, are highly vulnerable to fraud, in part because their care is financed by two separate programs.

For example, ambulance companies charge the Medicaid program millions of dollars every month to take elders and adults with disabilities to local emergency rooms. Once they arrive at the hospital, Medicare pays for their bills. Without access to Medicare claims and payment data, states have no way of confirming that those ambulance rides actually ended up at an emergency room. Texas officials recently pieced together enough evidence to find that their Medicaid program had been repeatedly defrauded by ambulance operators who were reimbursed for rides that never occurred.

Likewise, real-time access to Medicare claims data would help state Medicaid programs determine whether a home health worker actually cared for a patient on a given day, by checking to see whether Medicare received a bill for hospitalization of the patient on the same day.

Prager and others emphasize that timing is of the essence. To be useful to Medicaid investigators, Medicare data must be available within the 90-day window states have for paying claims. Cross-checking Medicare data after claims are paid means chasing down fraudulent providers who often take the money and relocate.

Washington State Medicaid Director Douglas Porter argues that the federal government should create a national provider enrollment system that would screen out questionable providers on the front end. A new law in his state requires all health care providers who want to enroll in the Medicaid program to first become certified by Medicare whenever possible. Certain providers, such as obstetricians and pediatricians, who do not serve elders, are exempt from the requirement.

Porter says the federal government should take responsibility for screening all health care providers, even if they only serve the Medicaid program. Most states, he says, don't have the capacity to do the kind of thorough checks needed to keep thieves out of the system.

Carper is sponsoring a bill in the Senate that would require Medicare data sharing, along with other initiatives to improve state and federal fraud prevention. Senator Charles Grassley, a Republican from Iowa, has a similar bill to beef up enforcement of Medicaid, in part by improving access to Medicare claims and provider data. Although neither bill is expected to move through Congress anytime soon, the recent hearings on Medicaid fraud prevention have applied pressure on the federal government to make the relevant changes sooner rather than later.