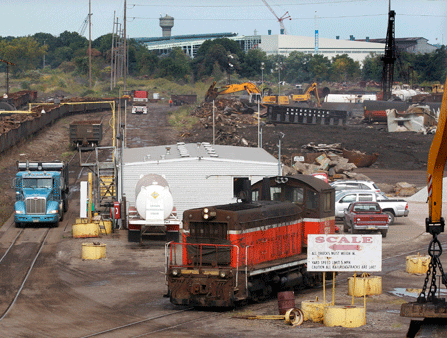 The surging natural gas industry has sparked a hiring frenzy in Ohio.

Energy companies are adding workers to tap the lucrative Utica shale deposit that stretches across the state's eastern half. In rusty cities such as Youngstown, the demand for drilling equipment has swelled the ranks of steelmakers.

Even the cash-strapped state government is hiring because of the gas boom: The Ohio Department of Natural Resources says it plans to add many as 70 new field inspectors to its oil and gas team by the end of the year, more than tripling its inspection force.

The agency had more than a quarter of its budget cut between 2011 and 2012, but it will be able to add the new workers thanks to a huge increase in fees collected from drilling applications. Natural gas companies drilled just 25 new wells in Ohio in 2011. But state regulators predict that number will soar to 250 by the end of this year and double by the end of 2013. Meanwhile, oil well drilling is expected to stay steady.

“No one is minding the store,” Lachelt says. “The states are simply not enforcing what regulations they do have on the books…They don't have enough inspectors, and wells are going uninspected.”

Increasingly, energy companies are using horizontal hydraulic fracturing — or fracking — to extract natural gas trapped within underground shale formations. By blasting millions of gallons of chemical-laced water into the ground, companies are able to extract gas that used to be impossible to reach. But critics of fracking argue that the method can easily contaminate local water supplies.

Ohio isn't the first state to respond to the shale gas revolution by hiring more inspectors. In Pennsylvania, where natural gas drillers have flocked for several years, the state has added more than 100 inspectors since 2009.

Even before it began adding workers en masse, Ohio ratcheted up its inspections. Last year, Ohio's team of about 30 inspectors performed a total of 11,842 inspections, up from 1,300 in 2010.

But Ohio inspectors visited fewer than half of the state's 55,749 oil and gas wells. In Ohio, as in many other states, inspectors simply don't have enough time to visit the hundreds—or thousands—of wells they are assigned to oversee.

In Ohio, the shale plates are mostly confined to the eastern and northwestern parts of the state. Still, each inspector might log up to 2,500 miles in a month, says Gene Chini, who supervises inspectors in the northern part of the state.

A well inspection can take hours or just minutes, depending on the circumstances. Most inspections take place during new drilling, when environmental problems are most likely to occur. In Ohio and Colorado, regulators might visit a new drilling site a handful of times in a single week, state officials say.

Once the drilling process is complete, inspectors spend most of their time responding to complaints — from landowners or others — about local wells. When there is time, inspectors make random visits. They check for cracks in cement well casings, or damage to other equipment that may cause spills, or leakage of poisonous gas into the air or water supply.

But because of a lack of manpower, most wells across the U.S. are not inspected in a given year. Many of them are small wells, where any problems would be small, too.

Ohio's inspectors have an easier job than their counterparts in some other states. New Mexico has roughly the same number of oil and gas wells as Ohio, but it employs only 12 inspectors to oversee them. That small crew made between 25,000 and 30,000 inspections last year — more than 2,000 per inspector, according to data gathered by Earthworks.

Oklahoma has a much bigger staff. It employs 58 inspectors this year, 6 more than it had in 2011, according to figures the state provided to Stateline. But Oklahoma's oil and natural gas reserves are bigger than those in most other states. Its inspectors oversee a total of 180,000 oil, gas and injection wells. Last year, the team made more than 52,000 inspections.

In Colorado, home to 47,651 wells, a team of 15 performed 12,000 inspections in 2011, according to the state Oil and Gas Conservation Commission. Since some wells were inspected more than once, particularly during drilling, the stage where the bulk of accidents occur, that means that inspectors examined far fewer than one quarter of them during the year. The agency has since added two inspectors.

“It's a long distance between wells,” says Thom Kerr, director of the Colorado Oil and Gas Conservation Commission. “(Inspectors) easily drive over 400 miles a day.”

In some states, those same inspectors must also handle problems with abandoned wells, many of which often go undocumented and can be hard to find. That's the case in Oklahoma, says Matt Skinner, spokesperson for the state's Corporation Commission, which recently spent at least a week finding and plugging a long-forgotten well that was gushing underwater.

Neal Woods, a University of South Carolina professor who specializes in enforcement of environmental policy, says it's not surprising that some states pay little attention to enforcement, a topic that's seldom discussed in legislatures, or covered by the media.

“It's an easy target for cutting,” he says. “There's a lot of attention paid to the development of initial standards, but the enforcement tends to be kind of behind the curtain.”

In West Virginia, which permits between 400 and 500 new wells each year, a team of 15 is charged with monitoring more than 55,000 active wells. The state's Oil and Gas Conservation Commission is trying to hire more inspectors, but doing so has proved difficult. The starting annual salary for an inspector is just $35,000, an amount that's nonnegotiable because it's set by statute.

“We are in a very challenging position,” James Martin, chief of the office of Oil and Gas for the West Virginia Department of Environmental Protection, said in a statement earlier this month. “We have jobs that need to be done, but we don't have enough candidates for them because of the requirements and we are limited in the salary we can offer.”

Kerr, the Colorado commission head, admits he'd like to see more resources for inspections. “We certainly could use more manpower,” he says. “But I wouldn't say we're staffed in such a way that it's a disaster.”

Kerr and other state officials say it is misleading for groups such as Earthworks to extrapolate such doom and gloom pictures from raw inspection numbers, which don't tell the whole story, considering that types of inspections vary broadly, as does geography and other on-the-ground factors between the states.

“It becomes very frustrating because we're the ones doing [the work] and knowing what's going on,” says Chini, the regional supervisor in Ohio.

“What is enough inspected?” asks Kerr. “Who's to say how many wells we should inspect?”

That's a tough question to answer, because there are no federal guidelines on the issue. It's up to each state to decide.

In the meantime, both men know their agencies will be scrutinized by private environmental watchdogs. Though zealous environmentalists may sometimes add a level of stress to the job, they can also be helpful in identifying problems not yet on the radar, the officials say.

“There's a lot of eyes out there,” says Kerr, “and that's an asset to inspectors.”