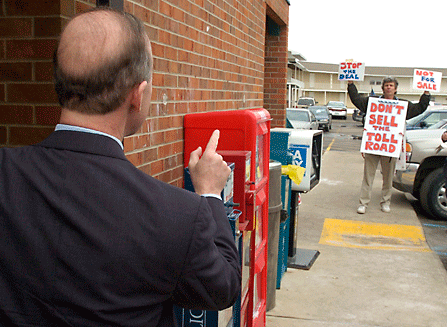 Leasing the Indiana Toll Road, even for a blockbuster price, remains one of the most divisive things Governor Mitch Daniels has done during his two terms in office. Daniels, who leaves office next year, is certainly no stranger to controversy. He tackled the notoriously difficult project of putting daylight saving time into effect. He championed tax increases to build a pro football stadium in Indianapolis, reworked local property taxes, and, just this year, backed an anti-union measure to make Indiana a “right-to-work” state.

But the Toll Road deal is different, if only because it will last for generations. Almost certainly, it will also define Daniels' legacy. The lease is a central component of Major Moves, Daniels' 10-year, $11.8 billion highway construction plan.

“Major Moves will be the first thing, if not one of the top things, that people think of when they think back to Mitch Daniels as governor,” says Evansville University political science professor Robert Dion. “The average person, across the board, will put that at the top. That is his crowning achievement.”

Private investors from Australia and Spain put up $3.8 billion six years ago to lease the 157-mile strip that runs from the Chicago suburbs to northern Ohio. The winning bid came in $1 billion higher than the next-closest offer, and the sum far exceeded even the administration's own expectations.

That money is now at work, mostly building highways and other road improvements throughout the state under Major Moves. Indiana will use the money to finish its portion of the largely unbuilt Interstate 69, which one day is supposed to run from Detroit to Mexico. The Indiana portion of the project will finally connect Indianapolis to the state's southeastern tip, which is the only region of the state without a direct route to the capital city.

Indiana is also spending the Toll Road lease proceeds to help build bridges over the Ohio River to Louisville, to speed the trip from Indianapolis to South Bend by upgrading a thoroughfare with stoplights to a divided highway and to complete a project with Ohio connecting Fort Wayne to the deep harbor of Toledo.

By the end of 2015, the administration estimates, Major Moves will pay for the repaving of 4,000 miles of roads, the rehabilitation of one out of every five bridges in the state and the creation of 413 miles of new highways. The construction will continue long after Daniels leaves office, but the project list has already been decided.

But decades after those ribbons are cut, Indiana will be living with private operators running one of its most crucial pieces of infrastructure. The Indiana Toll Road was 50 years old when Daniels signed the lease. The lease lasts for 75 years. “Certainly,” says Indiana Department of Transportation spokesman Will Wingfield, “we think that the investments that are being made under Major Moves are going to reap returns through the life of the lease.”

But Patrick Bauer, the Democratic leader in the Indiana House, whose South Bend district lies just south of the Toll Road, worries how Hoosiers will fare under the next seven decades of the lease. He argues that the deal was crafted to protect the private investors over the public, even while the public has to pay more tolls to use the road.

One thing that is clear is Indiana hardly could have timed its deal any better to bring in the most money possible for the Toll Road.

The idea for the lease, Wingfield says, came after the Daniels administration discovered in its first year that there was a $2 billion gap between the cost for transportation projects the state had promised and the revenue the state had to pay for those improvements. The governor saw the Toll Road as an underutilized asset that brought little money to the state. Some toll booths cost more to operate than they collected in tolls.

But when Daniels sent the idea of leasing the road to the legislature, it met fierce resistance and passed the narrowly divided House without a single Democratic vote.

The Indiana lease hit the market after the City of Chicago leased the Skyway, a short highway between the Indiana Toll Road and the city's South Side. Investors were eager for more deals of that kind, because they could provide a stable — and perhaps lucrative — source of income over a long period of time.

The 2006 deal may have set the high water mark for public-private partnerships. Little more than a year after the deal closed, the Great Recession started.

In some ways, the recession's onset boosted the effects of the Toll Road deal. Normal highway funding suffered in Indiana, as it did in most states, as motorists traveled less, bought less gas and paid fewer fuel taxes. But the price of construction materials fell too, meaning the state could get more bang for its buck on road projects. The federal stimulus package also rewarded Indiana for having so many “shovel-ready” projects ready to go.

“It's fair to say,” Wingfield says, “that this is something that would be hard to duplicate.”

Before the lease was signed, the Daniels administration approved fare hikes for the toll road, the first increases since 1985. The administration held off on charging the new rates until the new operators installed electronic tolling, but the jump, when it came, was substantial. A typical passenger car that paid $4.65 to travel the length of the toll road before the lease paid $8 to make the same trip afterward. Since then, it has risen even higher to $9.

The new operators, which are monitored by a state oversight board, can raise tolls every year for the duration of the lease, although they are limited to 2 percent or to key inflationary measures. Because of the large amount of interest on their loans, though, the operators have been operating in the red.

The Daniels administration says the operators spent $334 million improving the Toll Road in the first five years of the lease. Most of that money went to widen a section near Chicago. But the money also went toward repairing bridges and repaving the road, putting in new electronic toll booths, replacing snow plows and building a new state police post.

Bauer, the House Democratic leader, says the new operators are not demonstrating “good citizenship.” He says the private consortium also does not pay property tax on facilities such as gas stations and restaurants that it owns along the highway, because it is a public thoroughfare.

On the other hand, the operators did not allow state troopers to close the road during a snowstorm, claiming it was a private road. During another storm that brought flooding in 2008, Daniels declared an emergency and waived the tolls for motorists. The state had to later reimburse the operators $447,000 for the missed tolls.

Drivers in the area have little choice but to use the toll road, despite the problems and higher costs, Bauer says, because it is the only highway around with a high speed limit and no stoplights. “I would have to say that means that a win for (the operators) is a loss for us,” Bauer says.

The initial furor over the Toll Road deal swept Democrats into power in the Indiana House following the 2006 elections, and Bauer became House speaker for four years before Republicans regained control of the chamber. Bauer says the state could have accomplished much of the same goals as the Toll Road lease by using bonds instead.

In fact, he claims, the state could have made four or five times as much money using a series of 20-year bonds rather than the lease. “If (other states) are going to do something like this,” he says, “they ought to do it through bonding, because you get the same benefit and the state and the people control their own road.”

But Daniels' supporters say the lease — along with all the projects it has funded — will leave Indiana in a stronger position. Kevin Brinegar, president and CEO of the Indiana Chamber of Commerce, says that even if other states cannot replicate the Toll Road deal, they should learn from Indiana's inventiveness. That is especially important, he says, as all states grapple with the problem of diminishing revenues from fuel taxes, which normally pay for transportation projects.

“Non-traditional solutions,” Brinegar says, “are the kinds of the things other states need to look for at the state level and (which) are going to have to be explored at the national level as well.”