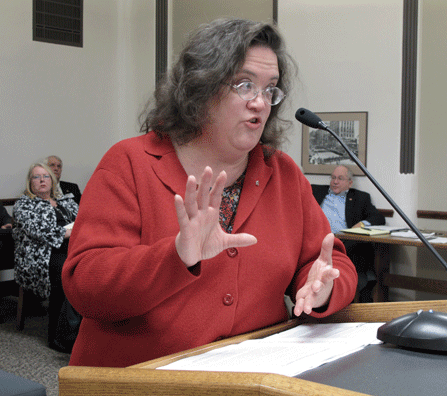 North Dakota voters on Tuesday will decide the fate of a ballot initiative that would make the state the first in the country to end property taxes.

If any state is going to take such a dramatic step, North Dakota would seem to be a likely candidate. North Dakota is generally a conservative state, and fiscal conservatives generally support lower taxes. The state is also experiencing a surge in tax revenue unrivaled elsewhere. The property tax is often described as the least popular of the taxes that fund state and local government.

Yet even those ingredients don't appear as though they will be enough. The reason why is that, regardless of what interest or what party they represent, the powers-that-be in North Dakota have a preference for caution.  That same preference exists in other states, which is why the most sweeping ballot measures to change or limit government have tended to fail lately.

Supporting the end of the property tax are a small group of amateur activists led by Charlene Nelson, a stay-at-home mom from Harmony Township in Casselton, North Dakota who homeschools her three boys. Nelson says she's put 13,000 miles on her car since February traveling the state in support of Measure 2. Her husband just changed the oil for the fourth time.

The almost total lack of institutional support is a key reason Measure 2 is expected to fail on Tuesday. A May poll for the Forum, the state's largest newspaper, found 26 percent of likely voters in favor and 74 percent opposed. Andy Peterson, the Chamber's president, says his group's internal polling also shows opposition running ahead 3 to 1. If that result holds, the North Dakota vote will be the latest where the radical designs of some ballot initiatives have turned the traditional friends of smaller government into foes—and turned appealing-sounding ideas into political losers.

When Colorado voted in 2010 on a constitutional amendment to ban state and local governments from issuing debt, business groups and most Republican legislators joined in the opposition. It received only 27 percent of the vote. Likewise, in Massachusetts business groups united against a 2008 measure to eliminate the personal income tax, which accounts for the majority of the tax revenue the state collects. It only received 30 percent of the vote. In North Dakota itself, a 2008 measure that would have cut the state's personal income in half lost 70 percent to 30 percent, after it was opposed by many of the same groups that are against Measure 2.

Even if the same thing happens on Tuesday, though, the debate on property taxes won't be over.

North Dakota lawmakers are already debating various new ways to reduce property taxes when the legislature reconvenes in 2013. For example, one proposal that's gained some traction would exempt the first $75,000 in value of every primary residence from property taxes. That exemption would go a long way in North Dakota: median home prices are $144,000 in the Fargo metro area and $179,000 in metro Bismarck.

The extent to which Measure 2 is helping drive these discussions isn't clear. What is clear is that as long as North Dakota has rapid revenue growth and large budget surpluses, lawmakers will face pressure to lower taxes generally and to lower the property tax in particular. “It is one of our major issues,” says David Drovdal, North Dakota's Republican House speaker, “and will continue to be one of our major issues.”

Cutting property taxes is difficult in North Dakota and virtually every other state because it is the dominant tax assessed by cities, counties and school districts. In most states, almost no one has even contemplated eliminating property taxes entirely. Most states, though, have probably never seen an economic boom like the one going on right now in North Dakota, thanks to the thriving oil industry in the Western part of the state.

North Dakota, the nation's 48th most populous state, now ranks second in crude oil production, trailing only Texas. The state's oil production has roughly quintupled over the last five years, which has been a windfall for the state government. North Dakota's general fund appropriations have gone from $2.5 billion in the 2007-2009 biennium to $3.3 billion in the 2009-2011 biennium to $4.1 billion in the current 2011-2013 biennium. Even with that rapid spending growth, North Dakota isn't spending nearly all that it brings in: The state is expected to have $1.5 billion in reserve when the current biennium ends 13 months from now.

The North Dakota Legislature has responded by moving to lower property taxes. In both 2009 and 2011, lawmakers directed additional state money to school districts, then required the districts to levy lower property taxes. To Nelson, who chairs a group called Empower the Taxpayer, though, these actions didn't go nearly far enough. When it became clear last year that legislators weren't going to act on their own to end the property tax, they began gathering signatures to place a constitutional amendment on the ballot. The end result is Tuesday's vote on Measure 2.

Part of Nelson's case is that the property tax has been applied inequitably in North Dakota. Through a variety of exemptions, local governments offer property tax breaks to some businesses and individuals, but not others. Nelson also echoes the most common criticism of the property tax: That the amount a homeowner owes isn't necessarily tied to their ability to pay. “They can say my home is worth $200,000,” she says, “but it doesn't do me any good until I go to sell it.”

Even some critics of Measure 2, such as David Hogue, a Republican who chairs the North Dakota Senate's taxation committee, are sympathetic to that point. Hogue points out that home values — and therefore property tax assessments — have surged in the West as a result of the oil boom. “If you ask me,” Hogue says, “the crux of the problem is that a large segment of homeowners on fixed incomes are being priced out of their home because their property taxes are going up faster than any of their other living expenses.”

What concerns Hogue and other Measure 2 foes is that the amendment would do much more than offer homeowners a big tax cut. It would reshape the roles of the state and of local governments in ways they see as unpredictable and dangerous.

Once the property tax is eliminated, the measure requires the legislature to “fully and properly fund the legally imposed obligations of the counties, cities, townships, and other political subdivisions.” What exactly that means is hotly contested. Nelson thinks it would be relatively simple for the state to offer local governments block grants to replace their property tax revenue and, in doing so, offer localities flexibility. Others expect chaos.

Local governments worry that they'd be totally at the mercy of state lawmakers for funding. State lawmakers worry about that, too. Drovdal says Measure 2 offers no definitions of what it means to “fully and properly fund” local governments or what their “legally imposed obligations” are. He doubts whether the legislature could even continue function as a part-time body — it meets only every other year, for 80 days — because it would spend so much time devising and revising local funding plans. “To totally abolish it,” Drovdal says, “it's just too big of a game-changer.”

Opponents also have other concerns. Would the state have enough money to pay for education and to pay for infrastructure upgrades in the West, which is being strained by the influx of people and businesses? Would the state need to raise other taxes to make up the difference? Is a system without a property tax sustainable if oil revenue should slow? Would out-of-state land speculators buy up North Dakota property if they knew it would go untaxed?

Many of those questions don't have clear answers. For that reason, many of North Dakota's political leaders hope voters will opt for caution over the dramatic change Measure 2 would entail. “This is like giving a blind barber a butcher knife and telling him to give someone a haircut,” says Peterson, of the state Chamber. “You'll get the job done, but you might be missing an eye or an ear.”

Even some supporters of Measure 2 such as Brett Narloch, executive director of the North Dakota Policy Council, say it's likely the opponents will win the day. Still, Narloch says he'll be watching the margin closely. “What I really want to see is that it's close enough that it gets the debate started,” he says. “If nothing else this has really got us debating about the role of the state, the role of local government and how they interact.”