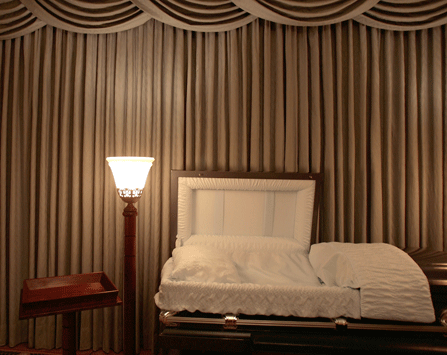 Big changes could be in store funeral directors now that a federal judge in Pennsylvania has ordered the state to rewrite its funeral regulations. (Photo Chris Hondros, Getty Images)

In 1993, when Harry Neel decided to build a funeral home on the grounds of the cemetery he had purchased outside Pittsburgh, he faced two challenges. The first problem was that under Pennsylvania law, he could not own and operate the business himself because he was not a licensed funeral director. The second problem was his name.

Neel wanted to use the name of the cemetery, Jefferson Memorial Park, for the funeral home. But Pennsylvania requires funeral homes to be named for their owners. First Neel looked for a licensed funeral director named Jefferson who was willing to be his partner. When he couldn't find one, he did the next best thing: He partnered with a licensed funeral director who was willing to change her name to Jefferson.

Neel then sold Jan Beichner—now Jan Jefferson—one share of stock in the new funeral home, and the State Board of Funeral Directors promptly granted the Jefferson Memorial Funeral Home a license to operate.

Pennsylvania's naming restriction was one of 14 rules that a group of 30 funeral directors described as unreasonable and anti-competitive in a federal lawsuit they filed against the state in 2008. Last month, Judge John Jones III of the Middle District Court of Pennsylvania ruled in favor of the plaintiffs, concluding that the funeral regulations were antiquated and potentially unconstitutional.

The defendants had argued that the naming rule was designed to protect consumers by keeping owners accountable. But Jones described that regulation and the other 13 rules as “thinly veiled attempts to maintain the status quo for established funeral directors and their families.” Jones didn't eliminate the rules outright, but he gave the board 90 days to rewrite them.

The Pennsylvania ruling, and a similar ruling in Louisiana, may introduce the most significant changes to the American funeral industry since the since the Federal Trade Commission began regulating funeral services in 1984, says Todd Van Beck, a longtime funeral director and industry expert. “I think it has the potential,” Van Beck says, “of waking up other state funeral regulatory boards to examine their own rules.”

Some Pennsylvania funeral directors defend the old rules. “The judge has now made things muddier than they were before,” says John Eirksen, who heads the Pennsylvania Funeral Directors Association, which represents 1,100 funeral directors. Eirksen admits that some of the regulations, like a ban on serving food in funeral homes, are antiquated. Nevertheless, “for the vast majority of people, it's worked.”

Eirksen calls the charge that the rules stifle competition “ridiculous” in a state with more than 1,600 funeral homes, second only to New York, according to data compiled by the Funeral Consumers Alliance, a group that advocates for more consumer-friendly funeral regulations and lower-cost funerals.

“The regulations for ownership have been ridiculous and kept that way by family businesses that didn't want to compete,” Heffner says. The restriction on food service, Heffner explains, has also limited competition among funeral homes. “If nobody can serve any kind of hospitality,” Heffner says, “then when the widow asks, ‘couldn't we have some cookies and some coffee,' they can say no,” and be certain that no one else will say yes.

“When my dad died 10 years ago,” says Heffner, “I knew that I could get a $1,000 fine (for serving food in the funeral parlor), but I did it anyway. One thousand dollars for eating a Twinkie in a funeral parlor? That's ridiculous…the state has no basis for that (regulation).”

Pennsylvania is one of five states (New York, New Jersey, Pennsylvania, Massachusetts and Connecticut) with a ban on serving food in funeral homes, but they are not the only states with complicated funeral regulations. “The state-based (funeral) regulatory system is an utter mess,” says Joshua Slocum, executive director of Funeral Consumers Alliance, “and more often than not, works to the detriment of consumers and works to the advantage of old family funeral homes.”

For instance, the state of Louisiana prohibits anyone but a licensed funeral director from selling “funeral merchandise,” such as caskets, vaults or urns, even though federal regulations say that large retailers like Wal-Mart and Amazon.com can sell caskets and state funeral directors must accept them. This contradiction has put the state in conflict with Louisiana's St. Joseph Abbey, home to Benedictine monks who were selling handmade caskets to get the Abbey back on good financial footing after their profitable pine timberlands were washed away by Hurricane Katrina.

The monks successfully defended their casket sales in the federal district court of Eastern Louisiana. The judge in that case ruled that the regulations prohibiting casket sales unfairly shielded the funeral industry from competition, to the detriment of consumers. But the state has appealed the district ruling to the 5th circuit court of appeals in New Orleans.

Slocum says these cases are “the last gasps of the funeral industry trying to hold on” to the complicated group of rules that protected them from market competition and shifting consumer preferences. “Caring for the dead,” Slocum says, “doesn't have to be as complicated as we've made it.”

While the rulings in the Pennsylvania and Louisiana cases only apply to those states, the courts' rationale in both cases could be a “persuasive precedent,” says Jim Kutz, the lawyer representing the 30 funeral directors in Pennsylvania.

But funeral regulations are complicated, says Van Beck, largely because of the public's discomfort with death. “The public has shown a pretty consistent, at-arms-length attitude to our line of work,” Van Beck says, “and reforming the regulations sometimes really falls on deaf ears. It's hard to get legislators to act when their constituents don't really hound them (to make changes to the field).”