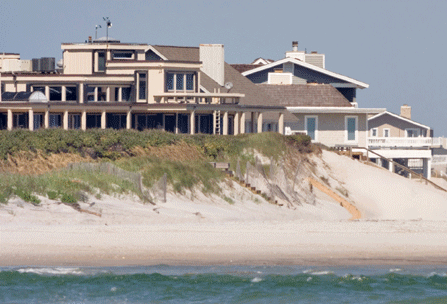 The North Carolina Local Government Commission helps communities deal with the fiscal impact of problems such as beach erosion. (iStockphoto)

The four states with the nation's highest unemployment rate are Nevada, Rhode Island, California and North Carolina. All except North Carolina are replete with financially stressed local governments, some near insolvency.

North Carolina's success at dodging similar crises is due in large part to a little-known state agency called the Local Government Commission. Other states have formal and informal tools to assist local governments, but none has the same reach as North Carolina's commission, which imposes budget controls and advises troubled communities.

The three national agencies that evaluate municipal bonds think so highly of the commission that they have rewarded North Carolina communities with bond ratings higher than those in most of the United States. The higher the rating of bonds sold by local governments, the more money taxpayers save on borrowing costs.

“The influence and oversight of the Local Government Commission is a major reason why North Carolina local government issuers have been able to weather this recession to this point,” says Andrew Teras, an associate director of the Standard & Poor's rating agency. “North Carolina's oversight model is one of the strongest of any state.”

It is also one of the oldest, created by the North Carolina Legislature in 1931 after a wave of municipal bond defaults in the first years of the Depression. The idea was to fuse the state government's conservative fiscal management philosophy onto local governments.

The approach has largely worked. Since 1942, when most of the 414 Depression-era defaults had been refinanced, no North Carolina city, county or special district has failed to meet a bond obligation. The local government commission has had to take over financial control of only three cities and one water and sewer district during that 70-year period, a remarkable run considering the frequency of hurricanes that strike the state and the vulnerabilities of the recent Great Recession.

“A lot of the credit [for avoiding financial troubles] goes to the presence of the commission,” says North Carolina Treasurer Janet Cowell, whose office includes the local government agency.

The North Carolina commission does not back up its financial management of local governments with actual state dollars if a city, county or special district is nearing a default. Some states give cash to troubled governments; Pennsylvania advanced its capital city of Harrisburg $4.2 million in loans, grants and state funds in 2010 to avoid a default on its municipal bonds. California offers emergency loans to school districts, which reduces their borrowing costs because the rating agencies rate the bonds more favorably. North Carolina's Local Government Commission does nothing like that.

Still, North Carolina's program is running relatively trouble-free, part of the reason the state is one of only eight in the country with the top bond grade from all three credit rating agencies. Says Rob Shepherd of the state's municipal league: “I've got to believe we'd have more local governments in distress, perhaps even in default, if we didn't have an authority like this.”

What North Carolina's commission does in lieu of providing cash is keep local debt in check by reviewing, approving and selling all general obligation bonds issued by cities, counties and special districts for such projects as fire stations, water plants, parks and libraries. This year, the commission rejected the town of Navassa's request for a loan to finish a sewer project, insisting that the town plug a budget gap first. The commission approved a request by the beachfront town of Nags Head to sell tax-financed bonds to pay for the replacement of eroding sand.

The commission, which has a professional staff and a nine-member board, also examines local governments' financial reports to spot problems and recommend fixes. Governments in the worst fiscal shape go on a watch list; if they cannot correct their difficulties, the commission can step in and run their day-to-day operations, including raising taxes, until local officials resolve the crisis. The state's emphasis is on being proactive so local officials can work out their problems before the commission is forced to assume control. Other states are more reactive. Instead of detecting distressed localities, for example, Pennsylvania aids cities only after state officials declare a financial emergency.

Adding to the centralized financial oversight of state and local governments, North Carolina lawmakers set up a single, consolidated public sector pension system. The system, also run out of the treasurer's office, is one of the best-funded in the nation, so strong that local government contributions are scheduled to decrease 2 percent in fiscal 2013, something almost unheard of nationally.

There is nothing complicated about the commission's oversight.  The key indicator is a local government's fund balance, or the difference between its assets and liabilities. A healthy level of reserves — the Government Finance Officers Association suggests between 5 percent and 15 percent of operating expenses — protects against downturns and natural disasters and ensures stable services, says Charles K. Coe, a public administration professor at North Carolina State University.

The commission suggests a minimum fund balance of 8 percent and will not approve a bond issue if the level slips below that. Many local governments in North Carolina require reserves higher than 8 percent, another reason the credit rating agencies say the state has weathered a prolonged downturn despite the decline of its tobacco, textile and furniture manufacturing base.

“It's typically a telltale sign if the local government keeps dipping into their fund balance,” says Shepherd of the North Carolina League of Municipalities. “Once below that 8 percent, the warning letters start to come. If they don't right the ship the commission will sound the warning horn a little louder.”

Bob Davis, chair of the Scotland County Commission, received such a warning letter in January. “The county has serious financial problems which the county's governing board must address immediately,” the commission's letter said, noting that the fund balance had fallen from 9 percent to 6 percent in a year, and ordering county officials to submit a plan detailing how they would resolve the problem.

Like many local governments, the one in Scotland County overestimated the amount of tax revenue it would receive. In addition to revising those estimates, the local government responded to the state commission's warning by raising taxes, cutting 25 jobs, ordering furloughs and reducing its 401(k) contributions for county employees. “They're on the right track now,” says T. Vance Holloman, the deputy state treasurer who supervises the Local Government Commission.

Chowan County erred in its revenue estimates for several years, prompting the commission to bar officials there from borrowing money until the county worked out its finances through tax hikes and spending cuts, a cycle that ended in 2010. The town of East Spencer was not so fortunate. The commission took control over the town's finances in 2001 after officials failed to go along with commission directives to erase a budget deficit, improve property tax collections and correct internal accounting methods. Eventually the town regained management of its affairs, though the price was steep. Residents were slapped with a 23 percent increase in water and sewer rates, among other actions.

Sometimes the problem is mismanagement, especially in small jurisdictions that lack financial expertise. A former town manager in the town of Maxton overestimated revenues for several years but did not cut expenditures when the mistakes were revealed. He spent down the town's reserves, contending that the local government commission's 8 percent target was excessive. After commission officials warned the Maxton town board that it would run out of money this summer, town officials laid off two of 11 police officers and are considering other actions.

“I'm so grateful the local government commission is working with us so we can resume our stance as a town,” says Maxton Mayor Sallie McLean, who was elected in November. “I think they're doing what they got to do.”

There is undeniable tension at times between the state agency and local governments, forcing the commission to navigate tricky political circumstances. Though McLean welcomes the commission, her predecessor and others in Maxton did not.

“We've always tried to serve an advisory rather than regulatory role even though we have that authority,” says Holloman. Cowell adds that the nine-member agency board includes members who have served as elected officials and understand the political sensitivity of asking a local government to raise taxes and cut services to balance a budget. “We don't ask them to do anything that we aren't doing ourselves at the state level,” she says.