DOSWELL, Va. – On a rainy Monday afternoon in mid-May,  Jeff Carpenter gazed out on the grounds of the State Fair of Virginia, of which he was the sole remaining caretaker. After a life of more than 150 years, the fair had closed. The grounds were about to be auctioned off to the highest bidder. Carpenter was philosophical — and historical. “The Virginia state fair went quiet during the Civil War and during World War II,” he said, “but it always came back.” Carpenter is hopeful that even under new ownership, the fair will come back this time too.

But this time is different. The non-profit agency running the fair defaulted on more than $70 million in loans and was forced into Chapter 7 liquidation after the fair was moved from its original Richmond location to The Meadow Event Park grounds just outside Fredericksburg in 2009.  The Meadow Event Park and the State Fair of Virginia, Inc., the non-profit organization responsible for bringing together the annual livestock, entertainment and fried food festival for the state, were sold at auction last week to the for-profit, Tennessee-based Universal Fairs, LLC, for $5.67 million.

The sale is the latest example of a cash-strapped state fair turning to a for-profit company in an effort to continue a remnant of the fair tradition, but also to make money.

Universal Fairs has quickly risen to the top of the for-profit fair market, now operating five fairs and festivals across the country. The company just finished running the Georgia State Fair, which it purchased last year, and will later this year operate festivals in Tennessee, Mississippi and Washington. The Virginia State Fair is the first fairground they've owned.

“I saw a bargain so I went for it,” said Universal Fairs owner Mark Lovell after last week's auction. “We have a lot of experience running fairs and we're good at it,” Lovell told the Fredericksburg Free-Lance Star. “We're excited with this beautiful piece of property and we're going to put on a fabulous 10-day event in September.”

But the fair's new ownership has not come without controversy. Universal Fairs isn't very much interested in the animal exhibits, crop displays and crafts projects that have marked the fair since its inception.  In transitioning to a for-profit model, the Virginia agricultural community is concerned that the new owners will abandon the scholarship offerings for youth in agriculture education programs like 4-H and Future Farmers of America. The already-promised scholarships will be given out this year; beyond that, nothing is guaranteed. The youth livestock competitions have been relocated from the state fair to the Rockingham County Fair in Harrisonburg, in north central Virginia.

“It's sad that agriculture is being put on back burner at some of these events,” says Jeff Ishee, general manager of the Rockingham County Fair in Harrisonburg. "At this point, the State Fair of Virginia is not going to be anywhere near what it used to be,” Ishee told WHSV News.

It doesn't all have to disappear. In Georgia, where managers of the Georgia State Fair also sold out to Universal Fairs, competition exists in the form of the state-run Georgia National Fair in Perry, which hosts youth livestock competitions and arts and culture shows. Traditionalists believe this alternative event, the larger of the two, is necessary to give Georgia residents a meaningful link with the past. Without the agricultural programs, says Jim Tucker, president and CEO of the International Association of Fairs and Expositions, the Georgia State Fair is not fulfilling its historical mission.

“(The private fairs) don't run the same way,” Tucker says.  “The existing state fairs have an agricultural element and return their positive bottom line to investments in their infrastructure and improvements in the grounds. The entertainment aspect, the mobile amusements and concessions, are the carrot to attract people to the agriculture and education.” With privately owned fairs, on the other hand, the amusements and concessions are the primary reason for the event's existence. A for-profit fair, Tucker says, is “not a state fair anymore.”

This is all happening because of budget problems. The majority of state fairs are still government-operated. But in the last few years as state budgets have shrunk, so have the fortunes of the historically revered state fair. The fairs have lost much of their government subsidy, while still having to cope with a significant amount of state regulation.

For example, in 2008, when New Mexico Governor Bill Richardson wanted to encourage attendance at the state's struggling fair, he ordered managers to drop admission prices by $1 after the fair was already 5 days into its 17-day run. “That killed their media buy,” says Stephen Chambers, executive director of the California-based Western Fairs Association, “but he's the governor and this is a state fair. They had to scramble to react and change everything.”

New Mexico's state fair is still operating, even though a 2011 legislative finance report called it “operationally insolvent.” But for other states, funding the state fair in the midst of budget crises was too much to ask. The Michigan and Nevada state fairs shut down in 2009 and 2011, respectively. The state of Nevada needed at least $280,000 to keep its fair afloat, but collected only $20,000 in donations.

Free-market think tanks in a number of states, such as the Mackinac Center in Michigan and the Illinois Policy Institute, have called for privatization of their states' fairs, arguing that the fair is “not an essential function of government” and should be left to the private sector. The State Fair of Texas has been private since its founding in 1886.

Taking their advice, the non-profit Great Lakes Agricultural Fair Board and the for-profit Suburban Collection Showplace in the Detroit suburb of Novi have teamed up to revive the state fair as a private-sector event called the Great Lakes State Fair.  The fair will be less robust than the state fair in its first year, says Blair Bowman, president of the showplace, but they aim to host livestock and arts competitions and feature local products just like a traditional state fair. Any excess money collected from the fair, says Bowman, will be the seed money for next year's fair. 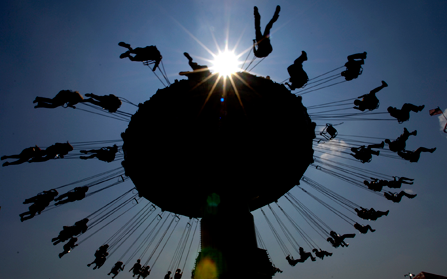 Interest in restarting the Michigan fair has been high, and Chambers says that the Michigan and Nevada closures are part of an ironic trend: on the one hand states are struggling to fund their fairs, but on the other hand, fair attendance and interest have never been higher.

“We're entering year three of what has overall been extremely strong fair attendance nationally,” says Chambers. “We benefit from high gas prices and the bad economy. We're not the trip to Disney World.”

And though there's been a shake-up in the management of state fairs, Tucker at the International Association of Fairs and Expositions says that wherever the agricultural community meets to identify the best livestock genetics or swap tips about how to make the best jams will be the home of the true “state fair.”

“It's not the (supervising) entity's name that's important,” Tucker says. “It's where the agricultural community is engaged.”