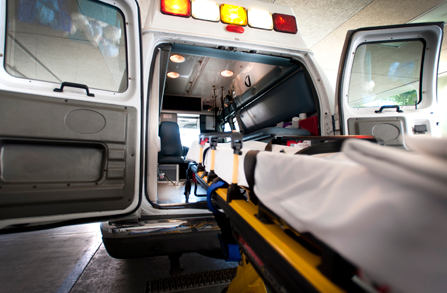 A running joke about public safety communication is that first responders are only trying to catch up to the average teenager with a smartphone. But the issue really isn't funny at all: The  performance of the nation's aging web of public safety networks, which often can't communicate with each other, is a matter of life and death.

According to The 9/11 Commission Report, many of the first responders on September 11, 2001, lacked the ability to communicate with one another at the site in a situation where time was extremely limited. “One of the most critical things in a major operation like this is to have information,” one of the first fire chiefs on the scene told the Commission. “We didn't receive any reports of what was seen from the [NYPD] helicopters. It was impossible to know how much damage was done on the upper floors, whether stairwells were intact or not.”

More than a decade after that disaster, Congress has approved $7 billion and the reallocation of 20 megahertz of spectrum airwave capacity to try to deal with the inter-communication problem. Those resources will help in the effort to create a national public safety network capable of transmitting both voice and data, including videos and photos. But many implementation challenges lie ahead, even with generous funding and broad bipartisan agreement that the network is a national priority.

“There are significant opportunities with going to this network,” Delaware Governor Jack Markell said in an interview with Stateline. "Think about an ambulance that had picked up a patient and they can send a video directly to the doctor."

Markell serves as vice chair of the National Governors Association, and testified before a congressional committee on that organization's behalf about the need for a nationwide network and the accompanying airwaves. The National Governors Association will hold a meeting in late June designed to help states understand the federal legislation and the options it lays out for them, including whether to build their own portion of the network or allow a new federal entity to do so on their behalf.

Markell says Delaware has achieved interoperability within its borders and will have to figure out how recent investments will fit into the nationwide network. “We [in Delaware] have made a really big investment over 10 or 15 years but those investments need to continue,” he says. “This is an opportunity to look not just five years down the road but 25 years down the road. Having this much spectrum available is a very big deal.”

Ed Cruz, chief information officer of Guam, says interoperability will allow public safety agencies to communicate with the large population of military personnel on the island in the event of typhoons and other natural disasters. During past typhoons, the current system hasn't proven to be very reliable, sometimes delaying response times. “We have a public safety network, but it's ailing and aging,” he says.

The legislation sets out a complex structure and timeframe for implementation. In the near term, it tasks the Department of Commerce's National Telecommunications and Information Administration with launching a new independent authority, FirstNet, by August 20.

FirstNet will be in charge of designing, building and operating a single nationwide network in collaboration with a private sector operator that will be chosen through a competitive bidding process. The network must eventually operate on a break-even basis by charging public safety agencies enough money to cover ongoing expenses.

States will face difficult, time-sensitive questions in the months ahead about whether to allow FirstNet to build and operate the network on their behalf or instead use a provision that allows them to opt out and build and operate their own portion of the national network while adhering to the federal standards set by FirstNet.

The national network moves away from the longstanding “network of networks” approach to communications and gives FirstNet broad powers as the sole licensee of the network. Assistant Commerce Secretary Anna Gomez told a recent gathering of the National Association of State Chief Information Officers that this centralized approach was necessary to ensure interoperability. "We did not want to repeat the same circumstances of the past in which voice networks were built on individual bases and therefore were not interoperable so that police and fire couldn't communicate during an emergency or EMS couldn't communicate with the National Guard, or whoever the responders are in the particular incidents,” she said.

After FirstNet chooses a private sector operator, it will develop a blueprint and determine funding levels necessary to complete the segment of the national network to be housed within each state.

After receiving this information, the governor of each state will have 90 days to decide whether to allow FirstNet to build the network using promised funding levels or to opt out and take responsibility for building the network itself. States that opt out will have to demonstrate their ability to comply with a host of technical requirements and will receive less funding for constructing the network—and no funding for operating and maintaining it. They will also have to demonstrate technical and operational know-how and adequate funding capacity in order to secure a lease of the allocated spectrum.

Richard Boes, Vermont's chief information officer, says his state has already made a lot of progress on its own and in collaboration with nearby public safety agencies. “We already share information and have an ability to interoperate with some of our neighbors,” he says. Still, Boes says Vermont is a long way from knowing whether it would seriously consider opting out because of a lack of clarity about logistics and costs.

Many are worried about the ultimate price tag of building, operating and maintaining the network, and who will bear any excess costs. The plan relies upon the assumption that the national network will be able to lean heavily on existing public and commercial infrastructure. Private providers will be incentivized through an agreement that allows FirstNet to lease excess network capacity to companies that partner with it to deploy the network.

Carlos Ramos, secretary of the California Transportation Agency, says that the available public infrastructure in California will likely require upgrading and reengineering to meet the national network's needs.

“It's a very worthwhile goal but it's also pretty expensive,” he says. Then again, he adds: “When you really look at it, $7 billion is not that much.”