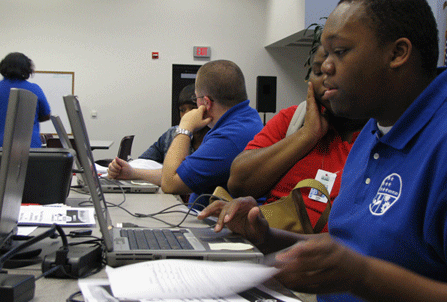 Unemployed workers receive training under Georgia Works, which served as a model for new federal efforts. (U.S. Department of Energy)

An unprecedented bid to let states experiment with the unemployment insurance system has gotten off to a bumpy start.

As part of a deal reached in Washington earlier this year, Congress approved a plan to let up to 10 states develop demonstration projects in which businesses could hire unemployed workers and essentially pay their salaries with money from the unemployment insurance fund (UI).

Typically states can't use UI funds to pay for wages, but only unemployment benefits. The 10 states picked for the program would be allowed to use UI funds to subsidize employer-provided training or to pay employers that hire UI beneficiaries.

Republican governors were among those pushing for such flexibility.  But now some Republican lawmakers on Capitol Hill and state officials say red tape from the U.S. Labor Department (DOL) is threatening the program. As of mid-May, no state had a pending application to be in it.

“States are already telling us of a number of roadblocks they see in the guidance and expressing a decreasing interest in applying for a waiver, which is unfortunate for the unemployed who could be greatly helped by some of these innovative strategies,” says U.S. Representative Geoff Davis, a Republican from Kentucky who chairs the House Ways and Means Subcommittee on Human Resources. Davis held a hearing on the topic last month.

The Labor Department says it is merely exercising diligence, being careful to make sure states use UI funds in the approved way. “The ability for states to request waivers to use UI trust fund dollars to finance the demonstrations is historic,” Jane Oates, Assistant Secretary of Labor for Employment and Training, tells Stateline. “The opportunity to do these demonstrations is something the department takes very seriously.”

While Congress has given states more flexibility in using UI funds, it also requires that the demonstration projects have “no net impact” on states' UI trust fund accounts, which Oates says requires “a thorough analysis of the potential impact of the demonstration related to the trust fund.”

Still, states are upset. Texas is particularly annoyed because it filed an application with the Labor Department back in February, hoping to use unemployment funds to create a variation of its already existing Texas Back to Work program. DOL rejected the application in March, telling the state it had to wait until the federal guidance came out. That didn't happen until mid-April.

“The legislation set out a simple process in about four pages of bill language, yet DOL released 19 pages of guidance that we believe to be overly bureaucratic and administratively burdensome,” Larry Temple, executive director of the Texas Workforce Commission, told the House panel.

Texas figures an additional 2,400 unemployed people could have been placed into jobs this spring as part of its Back to Work program had federal rules not gotten in the way.  The state is still deciding whether it will submit another proposal.

New Hampshire probably won't bother applying. “While New Hampshire has an excellent return-to-work program, it decided against applying for the demonstration project because USDOL imposed too many conditions,” Darrell L. Gates, deputy commissioner of the New Hampshire Employment Security Department, said at the same hearing. He said the state would have to hire additional staff just to complete the application.

Not even Georgia, whose widely hailed Georgia Works job training program was by many accounts an inspiration for the federal experiment, has made an effort to join it.

The state is currently in the process of modifying the Georgia Works program, says Tom Krause, a spokesman for the Georgia Department of Labor, and is not ready to announce any specifics.  “We are also in a bit of a holding pattern as we wait to see what the federal government and what other states may do.”

As Stateline has reported, the state dramatically expanded the Georgia Works program in 2010, training nearly 4,700 workers, but has struggled to contain the costs.  Over the past 12 months, the state has had about 1,400 people participate in the program.

For all the initial frustrations, the Labor Department's approach has its defenders. George Wentworth, of the National Employment Law Project, an advocacy group, calls the Labor Department guidance “completely appropriate and well-structured,” since the demonstration project is using UI funds in a totally different way.  The intent, he says, is to make sure those involved in the program “get good jobs with good wages and that there is a good chance they can retain the job permanently. You don't want employers laying off one person so that the employer can hire someone else paid by the wage subsidy.” He expects states will eventually apply.