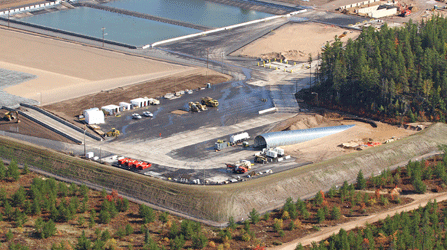 A new nickel and copper mine being built at Marquette, Michigan, on the Upper Peninsula, will be a major addition to the state's mineral extraction industry. (AP)

MARQUETTE, Michigan – It's a long drive from Marquette to Lansing: more than 400 miles in all, including a five-mile trip across the Straits of Mackinac, divider of Michigan's peninsulas. So it's easy to see why local officials here might not feel connected to lawmakers in the state capital.

“There's a huge disconnect between us and them,” says Debbie Pellow, chair of Marquette County's board of commissioners, from her office at the local wastewater treatment plant. The distance, she says, “gives you a feeling of disenfranchisement.”

Those are common feelings across Michigan's Upper Peninsula (UP), which has nearly one-third of the state's land mass but is down to just 3 percent of its population. Residents here (who call themselves Yoopers) have relatively little sway in the state legislature, with just a handful of representatives.

But now, thanks to a booming mineral market, the Upper Peninsula is back on the state's political agenda. Mining companies' growing interest in the Upper Peninsula's mineral wealth — mostly nickel and copper — has state policy makers pondering how best to capitalize. First, it was through a controversial zoning law. Now, lawmakers are discussing an overhaul of the tax code as it relates to minerals.

“We've always done mining, and they left us alone,” says Pellow, of the iron mines that put her community on the map. “And now, all of a sudden this new type of mining comes in, and there's billions of dollars involved….It feels like Lansing is saying ‘ta-dah,' there's some money up there.”

Last session, the Michigan Legislature passed a bill preventing local governments from zoning out unwanted mining activity. It was a state-local gravel mining dispute that brought up the issue. But the bill's broad language seems to give companies the right to mine any resource wherever they see fit. “An ordinance,” the law now states, “shall not prevent the extraction, by mining, of valuable natural resources from any property unless very serious consequences would result from the extraction of those natural resources.”

The bill, which moved to enactment in just two weeks and received little discussion, included an emergency provision allowing it to take immediate effect upon passage, a practice that some followers of the Michigan legislature decry as unconstitutional. Backers of the law, including two Upper Peninsula lawmakers who proposed it, say it would protect companies against municipalities that might shun large-scale development and the revenue that comes with it, largely because of minor local complaints — such as too much noise.

When a local government zones out businesses not tied to the land, it's less of a problem, says Representative Matt Huuki, one of the UP legislators who pushed the bill, because those businesses can move. That's not the case with mining. “Minerals only happen to be where God placed them,” he says. “It all comes down to giving investors security.”

But many here, even some who welcome the mining boom, wonder whether the measure goes too far in eroding local authority.

Richard Norton, an urban and regional planning expert at the University of Michigan, says it's common for states to carve out exemptions to local zoning ordinances, as municipalities can overzealously exclude development before fully researching its impact. But Norton says Michigan's latest exemption is “a sledgehammer solution to a problem, and it probably goes too far.”

The legislature isn't finished with mining, however. It is looking to create a new taxation system, on the grounds that the current setup is outmoded and bad for investors. The governor and several legislators are pitching a flat-rate severance tax on minerals that would replace sales taxes, corporate income taxes and the local ad valorem taxes applied to property.

At least 38 states place a severance tax on certain natural resources, according to a study prepared last year for the Center for Michigan, a nonpartisan think tank. Taxing commodities such as oil, natural gas or minerals as they are “severed” from the ground is the most common way states generate revenue from such resources. It's meant to capture the current value of the resources, unlike taxes tied to property value, which may decline as companies use up resources in the ground.

In 2010, Michigan collected more than $57 million in severance taxes on oil, natural gas, timber and iron ore. But most mining operations have long been exempted from those fees. The state wants to change that for the $2 billion industry that's looking to grow.

Perhaps surprisingly, Michigan mining companies are welcoming the prospect of a severance tax. They see it as replacing taxation based upon estimated, and sometimes disputed, value. “The problem with existing taxes,” says Matt Johnson, a spokesman for Kennecott Minerals, which is nearing completion of a nickel-copper mine in Marquette, “is they aren't based upon profitability.”

Under a severance tax, mining companies would have fewer costs upfront. They would pay more once the minerals are out of the ground and the mine is earning revenue. “It brings fairness and stability to investors,” says Representative Huuki, who is working on a severance tax bill.

But the proposed changes would not only alter the form of mining taxation — they would move most of it to the state level. The prospect of ceding control to Lansing has sparked anger among elected officials in mining communities, who worry that their ability to finance government services would suffer.

“The legislature would basically be in control of any changes by a majority vote and signature by the governor, versus leaving the tax as ad valorem, where it is collected and distributed to the local communities and school districts,” says Mike Quayle, a Marquette County commissioner. “The folks downstate are looking at it as another revenue source to help with their woes, and they won't give it up.”

The latest iteration of Governor Rick Snyder's tax proposal shows he's seeking to assuage those concerns. Under that plan, the state would impose a mineral severance tax of 3 percent, and 45 percent of that would benefit impacted communities. The remaining tax collections would go to a statewide rural development fund, which the governor's office says would support long-term investments in rural Michigan. That would include mining communities, which have historically suffered after their minerals are gone.

“This proposal was really crafted with local communities in mind,” says Sara Wurfel, Snyder's press secretary. “The bottom line is to move away from the booms and busts of the past.” The development fund's projects might relate to broadband, energy, rail, or job training, she says.

“What we're really trying to leave behind when the mines close is development,” says Keith Creagh, director of the Michigan Department of Agriculture and Development.

The Snyder administration insists that under the governor's plan, communities like Marquette would take in at least as much in taxes as under the old system. And localities would be charged with collecting the taxes, reducing the risk that Lansing would keep more than its share.

That isn't good enough for Quayle. “They dressed up this proposed bill rather nicely to try to calm any local opposition,” he admits, but he says the 3 percent rate may not provide as much money as expected. At that point, he fears, Lansing will change the rules on the Yoopers yet again.