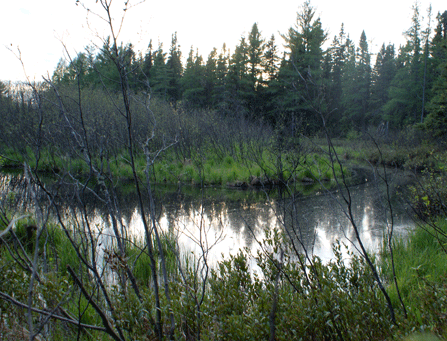 Beneath the placid waters of the Salmon Trout River on Michigan's Upper Peninsula lie vast stores of nickel and copper. (Jim Malewitz, Stateline)

BIG BAY, Michigan  – For thousands of years, the Salmon Trout River held fast to a deep secret, as its pristine waters flowed into Lake Superior. Below the river's headwaters, and hidden underneath 1,000 feet of sand, clay and rock, lie 4.1 million metric tons of ore speckled with valuable metals — primarily nickel and copper — a deposit that's valued at as much as $5 billion.

The treasure is no longer a secret here on the Yellow Dog Plains, a region of Michigan's Western Upper Peninsula marked by large swaths of untouched lands. The staccato of the hydraulic drill now overpowers the sound made by birds flying overhead, and trucks kick up dust where trees once stood. “I see something new every time I come here,” says Catherine Parker, noting a yellow electrical cord stretching across the ground, seemingly without end. The winding dirt road she drives is now bordered by a path of utility lines recently installed. It's an addition that Parker, who doesn't own a cell phone, says ruins the aesthetic.

Kennecott Minerals, a local subsidiary of the London-based mining giant, Rio Tinto, discovered the deposit about a decade ago. The company, which owns at least 400,000 of acres of mineral rights on the peninsula, is nearing completion of the nearly $500 million Eagle Mine, set to become the first primary nickel mine in the United States.

Parker frequently makes the hour drive northwest from her home in Marquette to monitor Kennecott's progress, reporting back to a coalition of local groups worried about the mine's impact on the river, surrounding plains and Eagle Rock, a spot that local Ojibwa people hold sacred. Parker is not the only one staying vigilant. “We can't sacrifice the UP for the Michigan economy, says Kristi Mills, director of Save the Wild UP, a nonprofit group that advocates for the Upper Peninsula's environment.

Michigan state regulators say that fears about the Eagle Mine are overblown, and that they give careful consideration to such projects, which take years to plan.  “I think our state statute and rules are more than adequate to address [the environmental impact],” says Hal Fitch, the director of the state Department of Environmental Quality, who calls Michigan's mining law “one of the best in the nation.”

Alongside local apprehension, there is considerable excitement among elected officials over the benefits the boom may bring. The return of mining is “huge in helping us provide services that we're mandated to provide,”  says Debbie Pellow, chair of the board of commissioners in Marquette County, where unemployment has fallen over the past two years but still hovers around the U.S. average of 8 percent.

That excitement isn't limited to the area around surrounding the Eagle Mine. To the west, in Gogebic County, which struggles under the weight of double digit unemployment, Michigan's state regulators have given tentative approval to a copper and silver mine planned by Toronto-based Orvana Minerals. And near the peninsula's southwest border with Wisconsin, two other Canadian companies have plans to mine a deposit of zinc, copper, gold and silver.

Mineral exploration has taken place here over the past few decades, but at a modest pace. Now steadily rising prices, driven, in nickel's case, by demand for clean technology manufacturing, have brought a surge in activity. Aided by new techniques, more companies are able to make money bringing out the deposits under the land.

“This is a boom, and this is as good as it's going to get,” says Ted Bornhorst, a professor of economic and engineering geology at Michigan Tech University, and a consultant for mining companies.

But many locals, like Parker, are worried about long-term environmental impacts that the boom-and-bust industry might leave behind — especially in a region that prides itself on its natural beauty.

Particularly worrisome about today's mining, environmentalists say, is that much of it involves ore that produces sulfuric acid, which they fear will contaminate local water supplies, as has happened in cases throughout the country, particularly in western states, where most major sulfide mining takes place. “It's no mystery that sulfide mining pollutes rivers and streams,” says Michelle Halley, an attorney for the National Wildlife Federation, who has been involved in legal challenges to mining permits in Michigan.

Recognizing the potential problem, Michigan and other states have crafted policies that deal specifically with sulfide mining. But as the boom has gathered momentum, those policies have received increased scrutiny from health and environmental advocates.

A legacy of mining

The discovery of rich mineral deposits on Michigan's Upper Peninsula is reviving an industry that began shaping communities more than 150 years ago, at a time when the land mass was completely desolate.

“Historically, this whole area is about mining, says Pellow, sitting behind her desk at a wastewater treatment plant in Ishpeming. “We wouldn't be here in the Upper Peninsula without iron ore mining.”

Reminders of that history are hard to miss. On a two-hour trip between Marquette and Houghton, a driver will pass businesses named for the industry and signs advertising at least two mining museums. Even the newspapers in Marquette (The Mining Journal) and Houghton (The Mining Gazette) reflect that heritage.

But part of the legacy is the toxic waste that mining companies left behind. Houghton County's Torch Lake remains on the U.S. Environmental Protection Agency's superfund list, as officials finish cleaning up more than 70 years worth of dumped copper mining waste that once filled 20 percent of the lake with sediments poisonous to marine life.

“A lot of folks focus on those issues with mines,” says Joe Maki, who coordinates mining regulation for the Michigan Department of Environmental Quality (DEQ). “But our grandfathers didn't know what we know now.” State regulations have shifted — in Michigan and elsewhere — from a focus on cleaning up mines after the ore is gone to reducing environmental impacts while mining is underway.

Still, the metal mining industry remains one of the most toxic industries in the United States. In 2010, mines disposed of or released 41 percent of all chemicals tracked by the EPA's Toxic Release Inventory, far more than any other industry, according to the agency. And mining's share of toxic waste had increased over the previous year.

“Mining disrupts geological processes probably more than most anything mankind does,” says Chuck Brumleve, a geologist and engineer, who has spent years in the mining industry. Now he works for the Keweenaw Bay Indian Community, studying the Eagle Mine's potential impacts.

The large scale of the mines makes it difficult for companies, even using the best technology, to contain toxic materials, Brumleve says. Sulfide mines like the Eagle project are a particular concern to him because the mining will take place below the Salmon Trout River.

Brumleve and local environmentalists fear that water from the river will flow into voids left by the mined-out deposit, creating acid drainage. Kennecott and Michigan regulators have repeatedly said that won't happen. The company says it will treat any tainted water onsite, and will use acid-neutralizing limestone and other rock to fill the void as it mines the ore. “Safety is part of our culture,” says Matt Johnson, a Kennecott spokesperson.

But Brumleve, along with Jack Parker, a mining consultant with more than 60 years of experience, worries that state regulators don't properly scrutinize mining applications, and, in the case of the Eagle project, have rubber-stamped a design that may be unsafe.

“I like mining,” says Parker, who was originally hired by the National Wildlife Federation to examine the Eagle mine application, but has now worked for several years without pay. “And I do want my mine to be done in a responsible manner, which is not happening now.”

Michigan created a new mine regulation law, enacted in 2006, in anticipation of a sulfide mining boom. It was crafted by a group of regulators, environmentalists and industry officials who recognized that sulfide mining could conceivably harm the environment in more ways than iron mining operations did in the past. According to the law, “the economic benefits of nonferrous metallic mineral mining shall occur only under conditions that assure that the environment, natural resources, and public health and welfare are adequately protected.”

Though many environmentalists describe the law as a positive step toward addressing sulfide mining's impacts, they say it still falls short. A report released this month by the National Wildlife Federation gave Michigan's mining law poor marks compared to laws in neighboring Minnesota and Wisconsin.

In Wisconsin and Minnesota, state officials conduct environmental impact assessments. In Michigan, the mining companies do it themselves. It's that issue that has sparked the biggest disagreements between the state and critics who don't trust mining company data. The critics say the cash-strapped DEQ lacks the expertise and the resources to check it. “We're always dependent on the company's data,” says Brumleve. “It's just fraught with the potential for misuse.”

Wisconsin as a model

Environmental groups have praised Wisconsin's permitting model, particularly its “prove it” provision, which requires companies seeking a permit to identify a similar mine in the United States that's operated for 10 years without polluting, and one that's been closed for 10 years without testing positive for additional pollution. “Over the years, Wisconsin has developed a very good policy,” says Calvin DeWitt, a professor of environmental studies at the University of Wisconsin in Madison.

That law was nearly changed last session, as some legislators, eager to attract iron mining activity — particularly from Gogebic Taconite — pushed hard to loosen up on the state's strict rules, sparking one of the most heated debates of the session. The move was narrowly defeated in the Senate, and Gogebic Taconite announced it would not be setting up shop in Northern Wisconsin.

Despite Wisconsin's wealth of deposits, no other mining companies have pitched plans for the state that go beyond exploration. Bornhorst, the Michigan Tech professor, sees that as an economic loss, placing blame on the strict policy. “Nobody's going there, because there's no certainty in regulation,” he says.

Bornhorst laments the protests of the environmentalists who are challenging mining projects in Michigan and elsewhere. “I think we as a society have lost touch with where things come from,” he says. “We really need these metals. We realize that there's environmental cost to all those things.”