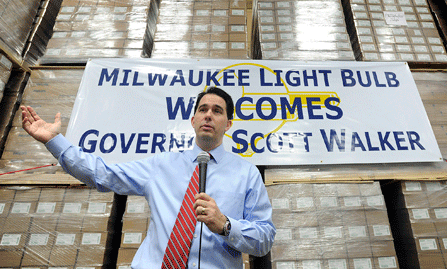 There are a lot of politicians claiming credit these days for creating jobs in Wisconsin, but there is also a lot of confusion over whether Wisconsin is actually gaining or losing jobs.

Republican Governor Scott Walker, who faces a recall election June 5, promised two years ago that he would create 250,000 new jobs during his initial four-year term. Walker has a long way to go to meet that mark, but he says the state is headed in the right direction. The governor says Wisconsin added 23,231 jobs during his first year in office.

Milwaukee Mayor Tom Barrett, the Democrat who lost to Walker two years ago and faces him again next month, also touts his record of bringing jobs to the state. He talks about his work revitalizing Milwaukee's Menomonee Valley neighborhood by attracting a variety of companies to open facilities there.

Even President Obama, who faces Wisconsin voters in November, has highlighted the jobs coming to the state. He visited a Master Lock factory in Milwaukee in February. There, he mentioned several companies adding more Wisconsin employees. Obama noted that the Master Lock factory was running at full capacity for the first time in 15 years.

For all the upbeat rhetoric, though, there is a basic question over whether Wisconsin is adding jobs at all. It may be the single biggest question in the rapidly approaching election for governor.

Much of the debate over job creation started when the federal Bureau of Labor Statistics released numbers that showed Wisconsin lost 23,900 jobs from March 2011 to March 2012, the worst performance of any state in the country. Barrett seized on the news, attacking the governor in a press conference and in an ad claiming that, under Walker, Wisconsin lost a job every hour.

But Walker's team insisted that the numbers were wrong. By the time the April figures came out last week, showing a gain of 4,500 jobs for the month, his administration had tried to build a case that the monthly estimates were unreliable.

“The information is inaccurate, imprecise and volatile,” Reggie Newson, Wisconsin's secretary of workforce development, told reporters Thursday. The report was an “outlier,” he said, arguing that the widely cited numbers contradict other evidence gathered by the state, including the results of other unemployment surveys, a decrease in claims for unemployment insurance and an uptick in revenue from the personal income tax. “That's why,” Newson said, “we can't depend on this inaccurate information.”

The Walker administration focused its criticism on the federal government's Current Employment Statistics survey, the most-cited set of job numbers for everyday use.

As surveys go, it is more like a poll than a census. Every month, the federal government asks a national sample of 141,000 businesses to share information about the number of workers they employ. From there, economists develop an estimate of how many jobs there are in given states, regions and industries.

Using a representative sample allows the public to get a quick snapshot of how the economy is performing, explains Jason Chute, a BLS economist. The surveys have proven to be largely accurate, but a variety of factors can introduce errors. Those range from picking the wrong companies for the survey to businesses making mistakes in answering the questions.

“People are looking at our data and saying ‘This is the actual over-the-month change in employment.' Well, it's the estimate of the over-the-month employment change,” says Chute. “For people who aren't as familiar with statistics, that can be difficult.”

The agency also takes a more exhaustive and time-consuming look at job numbers. For the Quarterly Census of Employment and Wages, BLS asks states to record the amount of unemployment insurance tax businesses are paying. Using that and other data, the survey covers about 98 percent of all employers in the country. But the most recently released official information from that survey goes only through September. 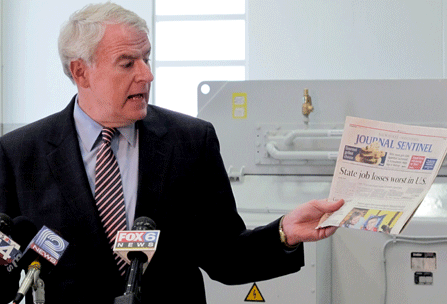 Last week, the Walker administration took the unusual step of releasing Wisconsin's Quarterly Census data for the last three months of 2011 a month and a half early. It showed that, last year, Wisconsin gained 23,321 jobs. That data is quite a bit older than the spring numbers, but it tells a different story.

“I've got some bad news for Tom Barrett but good news for Wisconsin,” Walker said in a TV ad touting the new numbers after they were released. “Mayor Barrett, you said this election is about jobs. I couldn't agree more.”

Newson, the secretary of workforce development, insisted there was no “collusion” with the Walker campaign in releasing the data so early. He said it is important that Wisconsin workers and employees know that the economic outlook is bright. That information could influence, for example, whether recent college graduates stay in the state.

“We want them to have the best information, because they need to know that Wisconsin's economy is growing,” he said. “There are job opportunities here. We want them to stay here.”

The exchange may appear academic, but both candidates see an opening on the issue of job creation.

Walker holds a 50-44 percent lead over Barrett, according to a recent poll by Marquette University Law School, and on many issues voters fall along party lines.

But the jobs picture is a little more murky. Only one fifth of respondents said they thought the state had gained jobs in the last year, while 37 percent said the state lost jobs and roughly the same number said there was no change.

It may be a weak point for Walker even among Republicans, only a third of whom said there were more jobs now than a year ago. Nearly half (46 percent) said the number of jobs stayed the same. (The poll was conducted before the latest Walker ad ran.)

Independents reported even less improvement. Thirty-six percent said there were fewer jobs now, and a similar-size share said the amount of jobs had stayed the same.

Still, Walker did better than the Milwaukee mayor when voters considered who would be better at creating jobs. Forty-eight percent said Walker would bring more jobs to Wisconsin, compared to 41 percent for Barrett.