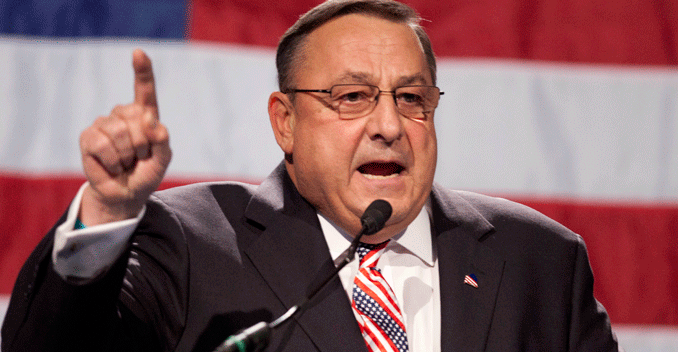 Governor Paul LePage of Maine doesn't shy away from controversy, nor has he been known to apologize when his shoot-from-the-hip style makes enemies. He did, however, recently feel the need to send a letter to the state's workforce explaining why, in an April 26 town hall meeting, he called the middle tier of state employees “about as corrupt as you can be.”

After acknowledging that many state workers are doing “great things for the people of Maine,” the governor wrote that other employees, for whatever reason, “have not come on board. Roadblocks have been put up, hurdles have been thrown in the way, and information has not been passed along to senior management … In my opinion it shows that they have been corrupted by the bureaucracy.” He said that union bosses are telling employees they should not participate in the administration's initiatives and should instead just “ride it out.”

These statements are the culmination of a string of conflicts LePage has had with state employees and the unions that represent them. They began even before LePage took office and have been steadily escalating ever since. Interviews with administration and labor officials and a review of complaints filed with the Maine Labor Relations Board indicate that the situation is even more volatile below the surface than is clear from the governor's public statements.

During the Republican governor's transition, on December 18, 2010, then-Communications Director Dan Demeritt sent an email to legislative leaders claiming that “once we take office, Paul will put 11,000 bureaucrats to work getting Republicans re-elected.” The email, which was later leaked, led to a flurry of panic in state agencies. Then, in March 2011, just a few months after taking office, the governor made national headlines by ordering the removal of a mural depicting the history of the labor movement from the state Department of Labor building. LePage said the mural painted the labor movement in too favorable a light.

This April, the state agreed to pay $65,000 to Andrea Lani, an employee of the Maine Department of Environmental Protection, who says she was demoted after testifying to a legislative committee as a private citizen about environmental hazards related to the chemical bisphenol-A (BPA). The state did not admit to wrongdoing in the settlement, but, as a condition, agreed to train to state managers about a law that prohibits retaliation against employees who testify before the legislature. “We're hearing similar types of complaints,” says Tim Belcher, general counsel for the Maine State Employees Association (MSEA), the largest union representing state employees.

The administration still hasn't been able to reach a contract agreement with MSEA following the expiration of its previous contract in July 2011. Three complaints from MSEA are pending before the Maine state labor board; the most significant, which has been granted a hearing, alleges that the state failed to negotiate in good faith and interfered with the rights of MSEA workers.

The administration points out that most of the charges were dismissed and says those that will be considered in the hearing grossly misrepresent what happened during the bargaining. “We have gone to the table,” says Joyce Oreskovich, director of the Maine Bureau of Human Resources. “We strongly object to their claims. We're disappointed by it.”

Belcher counters that the most important of the complaints was upheld by the board as worthy of a hearing. “What is left is the core,” he says. “This was the aircraft carrier, and the battleships were still left floating, but maybe we lost a destroyer or two. The most important thing is that we get to go to a hearing on the fact the state is just bargaining in bad faith and going through the motions.”

Still, both sides agree that the collective bargaining negotiations, while slow, have recently begun improving somewhat. The MSEA is the only union involved; other public employee unions in Maine have status quo contracts in place that extend conditions agreed to by the previous administration.

One of the sticking points at the bargaining table, according to a complaint filed by the MSEA, is an administration proposal that would eliminate the requirement that non-union workers pay a service fee, thus transitioning state government to a “right-to-work” system. MSEA says this change would cripple its ability to function because it is obligated under law to provide representation whether employees choose to join or not.  Legislation that would accomplish the same goal has been proposed in the past two legislative sessions, but has not passed.

The administration's central complaint is that state employees are obstructing administration objectives because union bosses are telling them to “ride it out” until a new administration comes in. “From talking to communications directors in all of our departments, they've seen this happen,” says Adrienne Bennett, press secretary for LePage. “We're not an administration that's settling for the status quo. What we're simply asking for is for state employees to change their attitude and change their mentality.” The administration has made improving customer service and streamlining regulation central goals, says Bennett, and some state employees have made that difficult.  “We have over 11,000 employees,” she says. “There are a variety of them. I can't speak to every single one.”

Union officials say that state employees have been cooperating with the administration and doing good work despite having to operate in a tense environment. “The pulse on the ground is that a lot of state employees have felt uneasy,” says Matt Schlobohm, executive director of the Maine AFL-CIO. “The tone and attitude has been one of disrespect.”

Some union officials contend that the administration hasn't been willing to listen to input and feedback from employees who are working on the ground. MSEA President Ginette Rivard says the union has been frustrated by a lack of access to the governor when it has concerns about how state agencies are operating. “We have a long history of being able to sit down and have a conversation with governors of both parties,” Rivard says. “Not necessarily always agree, but sit down and talk. We were able to sit down once over a year ago. There was nothing terribly memorable about it other than that it happened.”

Jim Mackie, staff representative for AFSCME Council 93, says an unwillingness to listen to frontline employees has led to dangerous working conditions in the Department of Corrections. Mackie says that the commissioner, Joseph Ponte, is so determined to minimize the use of overtime pay that staffing levels in the state's prisons are unsafe. “He instills such fear in the people who work from him that they know the very next day they'll get a visit from him if they authorize any overtime,” he says. “At some point soon, something dangerous is going happen. It's terrible to have to think that way, but that's the daily concern for folks that are working inside the prisons.”

Mackie is concerned about high levels of turnover and the state's ability to recruit a talented workforce. “The governor always says ‘Get on board or get out of the way,''' he argues. “That's not much of a way to entice people into state government or to retain creative thinkers.”

The administration recognizes that it is experiencing low levels of morale among its workers, but doesn't believe the challenges to be out of the ordinary. “If employees' morale can be tied to having a contract that has pay raises, then I share the same problem with the people in the private sector,” says Oreskovich, of the Maine Bureau of Human Resources. “Everyone is feeling overworked and underpaid across the public and private sectors.”

Oreskovich says she recognizes the state should do more to boost morale and hired a human resources manager in February to develop programs that will accomplish that goal. The programs are unlikely to involve monetary rewards but will acknowledge good work. “This is a steady drumbeat of appreciations,” she says. “Everyone always says that money isn't the only thing that matters, and I believe that too. I've seen that just a small thank you and genuine—not bogus—appreciation can make someone's day.”