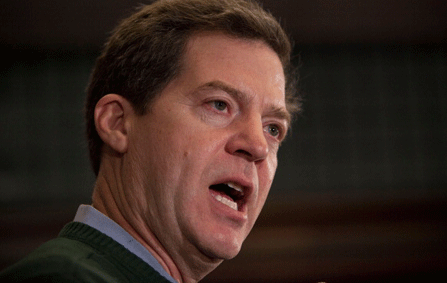 Heading into this year's legislative sessions, conservative lawmakers in Kansas and Oklahoma hoped to enact big income tax cuts. Some even aspired to make Kansas or Oklahoma the first state to eliminate personal income taxes since Alaska did it in 1980.

As the sessions wind down in both Topeka and Oklahoma City, it's clear that neither state will go that far. But by aiming so high, income tax foes in Kansas likely will be able to claim a significant victory. In Oklahoma, lawmakers are expected to approve a notable income cut as well, though one that falls short of Governor Mary Fallin's initial hopes.

As their budget situations have improved in recent months, more states—especially those with Republicans in charge—have started to consider tax cuts again. Tax cut supporters aimed highest in Kansas and Oklahoma. The fact that they achieved only partial success illustrates the difficulty of making wholesale changes to the tax code. Such changes require trade-offs that give pause to even some of the most dedicated supporters of lower taxes and smaller government.

In both Kansas and Oklahoma, lawmakers feared that eliminating state income taxes would jeopardize funding for schools and other vital services, and might throw budgets out of balance for years to come. Both states considered paying for the lower rates by ending various tax breaks, but found it politically difficult to do so.  Even in conservative states such as Kansas and Oklahoma, a change as bold as eliminating the state income tax entirely now seems possible only over many years.

Last year, the Kansas Senate failed to act on a House measure to gradually eliminate the state's income tax. The idea seemed to gain new life when Governor Sam Brownback teamed up with iconic conservative economist Art Laffer late last year. But when Brownback introduced his plan in January, he declined to call for the complete elimination of the tax, instead proposing a cut that would drop the top rate to 4.9 percent.

To pay for his cuts, Brownback proposed ending certain tax breaks. But some of his biggest targets, such as the mortgage interest deduction and the charitable deduction, proved politically sacrosanct. Despite the Kansas Senate's Republican majority, many senators were lukewarm on the concept of income tax cuts at all, arguing that Kansans would prefer lower property taxes or more money for education and transportation. Nonetheless, the anti-tax forces in Kansas were able to win huge cuts by outmaneuvering their opponents.

On May 9, a coalition of Democrats and moderate Republicans in the Kansas Senate was expected to vote against a compromise deal for large tax cuts worked out between Senate and House negotiators. But, while the Senate debated the bill, the more conservative House moved into action. It brought up an earlier, more sweeping version of the legislation, approved by the Senate in March. The Senate had voted on that version of the bill as a way to keep negotiations going, believing that its effects on the state budget would be so great that it had no chance of ever becoming law without major modifications. In fact, the plan would cut state revenue by even more than the original proposal from Brownback. “I think a lot of people believed no one would every act on it because the price tag is so large,” says Paul Davis, the Democratic leader in the Kansas House.

The two chambers raced against each other. Under legislative rules, if the Senate voted on the new compromise tax plan first, its March vote would be moot. If the House voted to concur on the old plan before the Senate acted, it would go straight to the governor's desk because the Senate already had approved it. Both chambers moved to cut off debate, but the House acted first. The plan passed 64-59.

Brownback says he'll sign the bill unless the legislature comes up with a different plan. While the plan would not eliminate the income tax, it would have dramatic effects.

It would end income taxes for certain types of businesses — 191,000 in all. It would establish two personal income tax rates at 4.9 percent and 3 percent, down from the state's three rates of 6.45 percent, 6.25 percent and 3.5 percent today. It would end a temporary sales tax increase next year, cutting the rate from 6.3 percent to 5.7 percent. Though the measure would eliminate some tax credits and deductions, it would leave many others intact. It also would increase the size of the standard deduction, costing the state yet more revenue.

Even Brownback says he would prefer that state lawmakers send him a bill that costs less. A new compromise reached by House and Senate negotiators on Wednesday would do that by delaying implementation of the cuts and by leaving the standard deduction alone. However, it would still eventually cut the top income tax rate to 4.9 percent, cut the sales tax rate to 5.7 percent and end income taxes for the same group of businesses.

As of yesterday afternoon, the Senate was balking at this new deal. If the legislature doesn't approve the latest compromise, Brownback says he will sign the bill on his desk. “The governor's confident that this bill would create tens of thousands of new jobs,” says Sherriene Jones-Sontag, a Brownback spokesperson. “After a decade of lost jobs and people, Kansas is now on the path of economic growth.”

Critics warn of a different outcome. “This notion that we're going to grow ourselves out of this income tax cut is phony. It's never been proven. It's not going to happen.” says Joan Wagnon, the chair of the Kansas Democratic Party and a former state revenue director. “These people are going to have to see the effects of their theories on the Kansas economy and it grieves me because it's going to be disastrous.”

Unlike Brownback, Mary Fallin, Oklahoma's Republican governor, did begin the year advocating a plan to eventually end the income tax. Fallin would have cut Oklahoma's top income tax rate to 3.5 percent from the current 5.25 percent, then gradually cut it further whenever the state had strong revenue gains, to the point that one day it would be eliminated.

But Fallin conceded at the end of April that cuts as large as she imagined were unlikely to pass this year. Yesterday evening, Fallin and legislative leaders reached a deal that will cut the top income tax rate to 4.8 percent, then cut it again to 4.5 percent in 2015 if state revenue grows by at least 5 percent. “If we end up getting the rate down to 4.95 percent or 4.75 percent clearly that's not as low as the governor wanted to go,” Alex Weintz, a spokesman for Fallin, said earlier in the week, “but it's a step in the right direction.” Those cuts would build on income tax reductions the state has made over the last decade.

Oklahoma lawmakers scaled back their ambitions after struggling to compensate for the lost revenue from the lower rates by making other changes to the tax code. Fallin's plan called for $1 billion in tax cuts, balanced by $700 million in additional revenue from eliminating dozens of tax credits, exemptions and deductions.

But coming anywhere close to that $700 million target has proved politically difficult. Lawmakers were reluctant to repeal provisions with broad, popular benefits such as exemptions for seniors' income. They faced fierce resistance when they considered removing narrower tax breaks, such as economic development credits.

Meanwhile, Oklahoma lawmakers worried that the state's financial position wasn't strong enough to commit to large tax cuts. The state's revenue collections are meeting expectations right now, but lower natural gas prices add an element of uncertainty. Lawmakers face pressure to reverse budget cuts made over the last few years. Polling shows Oklahomans like the idea of lower income taxes, but prioritize funding for education and other services ahead of them. While in Kansas the state chamber of commerce was leading the effort for income tax cuts, business groups in Oklahoma emphasized that education and transportation funding matter to the economy too.

The theory behind the income tax cuts is that lower taxes will create economic growth that will eventually help compensate for the lost revenue. Even in Oklahoma, though, where conservative Republicans run both houses of the legislature, lawmakers are reluctant to stake the future of the state budget on the hope of future gains. “I think we should pay for the tax cut on the front end, not on assumed revenue growth in the future,” says Oklahoma State Treasurer Ken Miller. “We need to have a structurally balanced budget.”

Still, it is possible the state will cut taxes more dramatically in future years. Even lawmakers who wanted to eliminate the income tax entirely always expected that it would take time to do so. “There's not a question in my mind,” says Oklahoma State Representative Earl Sears, who chairs the House Appropriations and Budget Committee, “that no matter what we do, we will continue the discussion on income tax reduction.”

Editor's note: This story has been updated to reflect the tax cut deal reached by Oklahoma lawmakers last night.