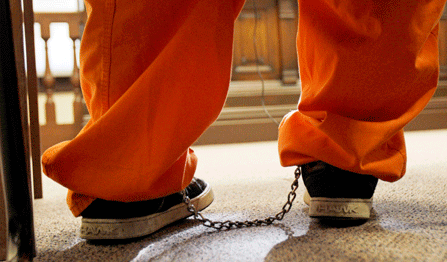 Colorado legislators have placed limits on transferring juveniles to adult court, mirroring a national trend of focusing more on rehabilitation and less on retribution when dealing with youthful offenders. (AP)

In 1993, in what was called Denver's “summer of violence,” high-profile gang warfare attributed to youth “super-predators” seemed to overtake the city. Drive-by shootings were a common occurrence. Then-Governor Roy Romer called a special session of the Colorado legislature and rolled out his “iron fist” plan to address the violence, which included giving prosecutors the full authority to transfer youths under 18 directly into adult court.

Now, nearly 20 years later, the tide is turning against the transfer, or direct-file, system, in response to national trends away from mass incarceration and criticism over the lack of judicial involvement in juvenile prosecution decisions. Last month, Colorado Governor John Hickenlooper signed a bipartisan measure to require judicial hearings before any juvenile case can be moved to adult court.

“I respect the work that the district attorneys do to try to keep communities safe,” says Representative B.J. Nikkel, who co-sponsored the recent legislation, “but this [direct-transfer authority] is just too much power for any one entity to have. There need to be checks and balances so that youth are not caught in the middle of the system.”

The prosecutor's sole authority to transfer a case from juvenile to adult court was supposed to be used only for the most egregious crimes — murder, rape or assault with a deadly weapon. But over time, youth arrested for lesser crimes were also sent to the adult system. Of the 1,800 youth cases directly moved to adult court from 1999-2010, only 15 percent were homicide cases, according to an analysis conducted by the Colorado Juvenile Defender Coalition.

Changing the rules won support this year from Tea Party conservatives and liberals alike, concerned both with the rising costs of incarceration and the lack of judicial oversight. But district attorneys, prosecutors and Colorado Attorney General John Suthers strongly opposed the changes and heavily lobbied Hickenlooper not to sign the bill. “These reforms have worked extremely well,” Suthers wrote of the direct file system in a Denver Post op-ed. He noted the drop in juvenile crime in Colorado over the last 15 years.

Tom Raines, executive director of the Colorado District Attorneys' Council, worries that because crime rates have fallen and public safety is no longer the top-tier policy issue that it was in the 1990s, changes to the system could “swing the pendulum too far” away from policies that keep the community safe.

The Colorado legislature's attention to the direct-file system reflects a national trend in states reconsidering the tough-on-crime policies that dominated policymaking in the late 1980s and early 1990s.

Based on public concern and media attention to the rise in youth violence that peaked in 1994, every state created youth transfer policies to send more teen-agers to adult court and extend sentences for most crimes. Before 1970, only two states, Florida and Georgia, had laws giving prosecutors discretion about where to file a case, according to a 2011 analysis conducted by the federal Office of Juvenile Justice and Delinquency Prevention. But by the year 2000, 15 states had prosecutorial discretion laws. Now a number of them are being reconsidered.

In New Jersey, the state Supreme Court is deciding whether to give power to judges or prosecutors when it comes to transferring youth from family court to adult court. While New Jersey does give judges the right to review a prosecutor's decision about where to charge a juvenile, judges can overturn the prosecutor's decision only if the request to charge the juvenile in adult court represents a “patent abuse of discretion.”

Attorney Patrick O'Hara, who is representing a juvenile in one of two cases before the New Jersey court, told The Record of Bergen County that the waiver law has led to prosecutors transferring cases to adult court just because they can. And the rates of transfer vary from region to region and by race and gender, according to a recent report from the New Jersey Institute for Social Justice.

Based on scholarly research, it is not clear that transferring youths to adult court has had any effect on rates of youth violence. Six large-scale studies have found that youth charged as adults are more likely to reoffend than those charged with similar crimes in the juvenile justice system. A Centers for Disease Control task force determined that transferring youth from juvenile to adult court “is counterproductive to reducing juvenile violence and enhancing public safety.”

Despite research casting doubt on the public safety benefits of transferring youth to adult court, turning away from the practice has proved difficult. That is especially true in Colorado, where legislators passed a change to the state's direct file system once before, in 2008. That bill was vetoed by then-Governor Bill Ritter.

Representative Nikkel says that even this year, many Colorado Republicans did not sign onto the bill because they feared being labeled “soft on crime” in an election year. Governor Hickenlooper also had a hard time deciding whether or not to veto the bill.

"This is about as close as I've come to a veto without vetoing," he told the Denver Post.  "At the end, I feel very comfortable with the decision…I think especially in a split legislature that if a bill works its way through both sides, that's a powerful statement."

New Jersey's Supreme Court has not announced when it will issue its opinion regarding the state's juvenile waiver system.